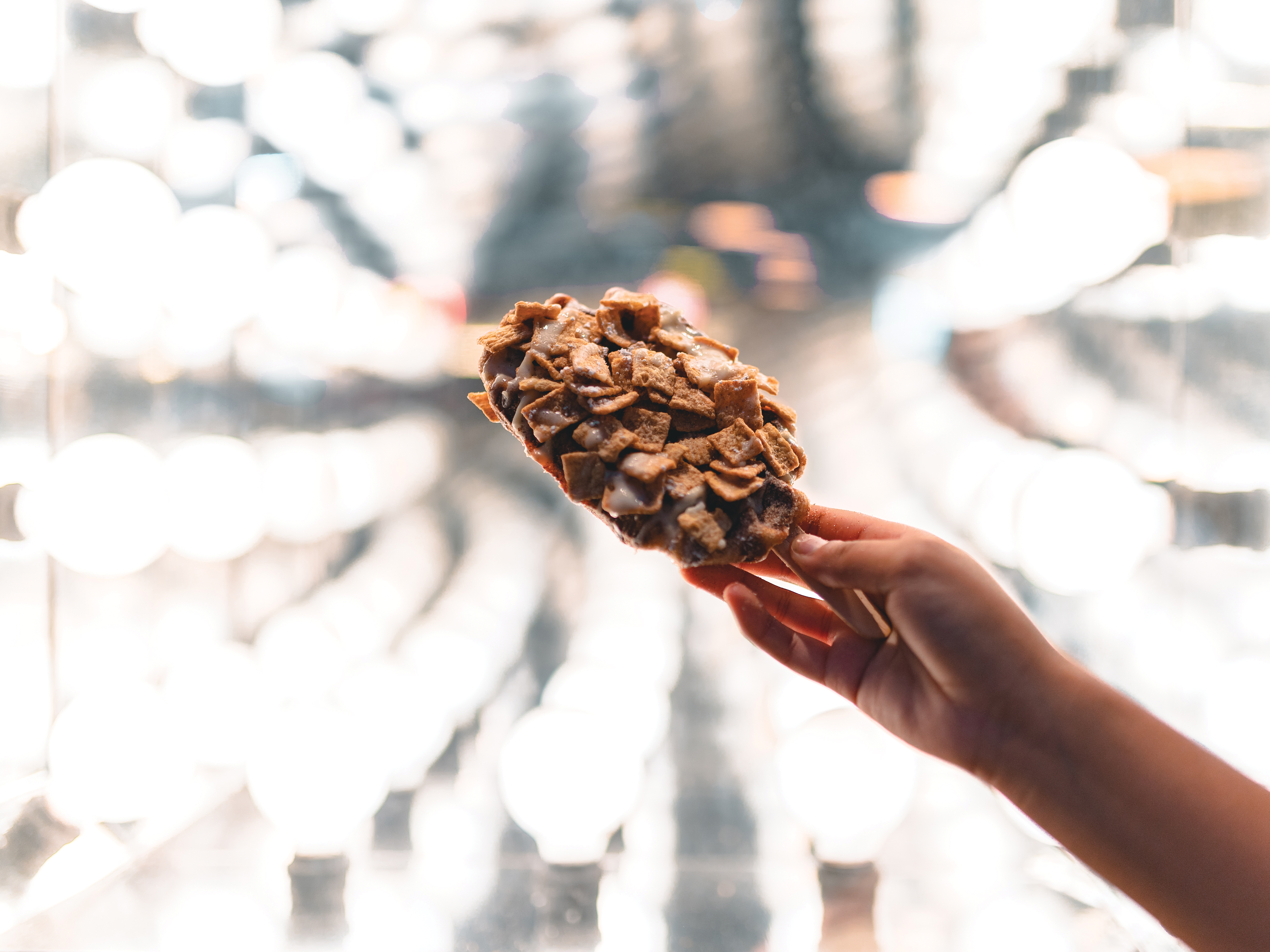 The food at a glance:

Returning to the Riverside Food Lab after visiting Monty’s Good Burger, the next eatery on our radar was Sweet Combforts. Situated towards the front of the food lab in an alcove, Sweet Combforts greets you with its honeycomb-themed decor and the welcoming scent of freshly baked waffles. Originating from Irvine, CA, this “Belgian waffle pop” restaurant rose in popularity during Coachella and has even been featured on Buzzfeed. Well-known for their aesthetics and Instagram popularity, it was worth giving a try.

Upon approaching the counter, the manager recommended the Churro Crunch Waffle Pop which is their best seller. Looking at the menu, some items that stood out to me were the Vegan Waffle Pop and the Grilled Cheese savory waffle, which I also ordered. Each item was well under $8, so Sweet Combforts was definitely one of the more cheaper eateries in the Riverside Food Lab. The menu also had milkshakes and ice cream, but they seemed pretty standard. The ordering counter was visually appealing, with a handmade sign placed by the register and various honeycomb decorations adorning the eatery’s entirety. On the side of the alcove there were a few bar stools and a large mural. Seating wasn’t very plentiful, but it seemed appropriate considering that most of the food items were meant to be carried around on a stick.

The first item received was the Churro Crunch Waffle Pop. Considering that Sweet Combforts was extremely famous for their “Instagramable” food items, I waited in anticipation as I picked up my order. However, I was slightly underwhelmed by the presentation. The Belgian waffle was thick and warm, covered in crushed Cinnamon Toast Crunch cereal and drizzled with a white glaze icing, similar to cinnamon roll icing. The waffle was extremely messy and unstable; when lifting up the Waffle Pop, the toppings crumbled off and the icing was dripping everywhere. The Waffle Pop was very messy, which seemed counterproductive for a waffle “pop.”

However, when biting into the waffle, I was surprised by the fact that it actually tasted like a churro. It was soft with a perfect cinnamon flavor, and each bite welcomed me with a solid crunch from the Cinnamon Toast Crunch adorning the waffle’s exterior. Though the Waffle Pop itself was a bit unstable and not very “Instagramable,” the Churro Crunch Waffle Pop was a delicious sweet treat to enjoy.

Next, I tried the Vegan Waffle Pop. Upon arriving, it was extremely underwhelming; the waffle was substantially smaller than the previous item, and was super flimsy. It had no toppings, and had a small amount of powdered sugar hastily dusted on top. As far as “Instagram appeal” goes, the only positive aspect was that it was structurally stable and I could lift it upright. However, it wasn’t extremely visually appealing. When biting into it, the waffle was soft and slightly mushy, and it didn’t seem to have any crunch to it.

The flavor of the waffle was extremely confusing; it had a light flavor of vanilla, with a hint of something that tasted like low-quality almond milk. I only took multiple bites of the waffle so I could figure out the flavor because it didn’t process the first few times I bit into it. Overall, the Vegan Waffle Pop was not the best option, and seemed as though it was only added to the menu to diversify it. It definitely was not worth the purchase, and if someone was craving a vegan dessert, they’d be better off buying one elsewhere.

I ended my waffle feast with a savory waffle, the menu item I was most curious to try. The Grilled Cheese savory waffle arrived, with gooey cheese oozing between two crispy Belgian waffles. These waffles were different than the usual Belgian waffles served in that they were speckled with tiny dots and with a golden brown color. They were crispy on the outside and airy in the inside. The cheese was an extremely light yellow, almost like Dijon mustard.

When biting into the waffle sandwich, the first thing that you notice is that the cheese is not extremely strong. It’s definitely mixed with an American cheese, because the cheese looks a bit like plastic. The Belgian waffles are hearty and a bit grainy, and they pair extremely well with the cheese.

The only complaint I have with this dish is that if you don’t eat it right when they serve it, the waffles and the cheese especially can lose their appeal and flavor. I ate the waffle sandwich when it was slightly cold, so I did not enjoy it as much as I hoped I would have. However, a coworker of mine ordered one separately, and was extremely satisfied with his savory waffle because the cheese was still melted and oozing. As far as visual appeal goes, the savory waffle isn’t extremely “aesthetically pleasing.” It looks exactly as it sounds; a slice or two of cheese sandwiched between two Belgian waffles. It’s great to eat, but isn’t something an “Instagram foodie” would post on their account.

Overall, Sweet Combforts is the embodiment of “Instagram foods,” in the sense that they look great online and during their marketing campaigns, but the reality is that they’re overhyped and don’t meet the high expectations of consumers. The items were overall tasty and their Churro Crunch Waffle Pop was definitely worth buying, however, it did not meet the visual standards the company had set, and the dessert was very sweet. The dessert items are very sugary, so if you do not like excessively sweet dessert treats, tread with caution. However, if you want a sweet study snack or an affordable dessert after eating at another restaurant in the Riverside Food Lab, Sweet Combforts is a perfect way to end your day.