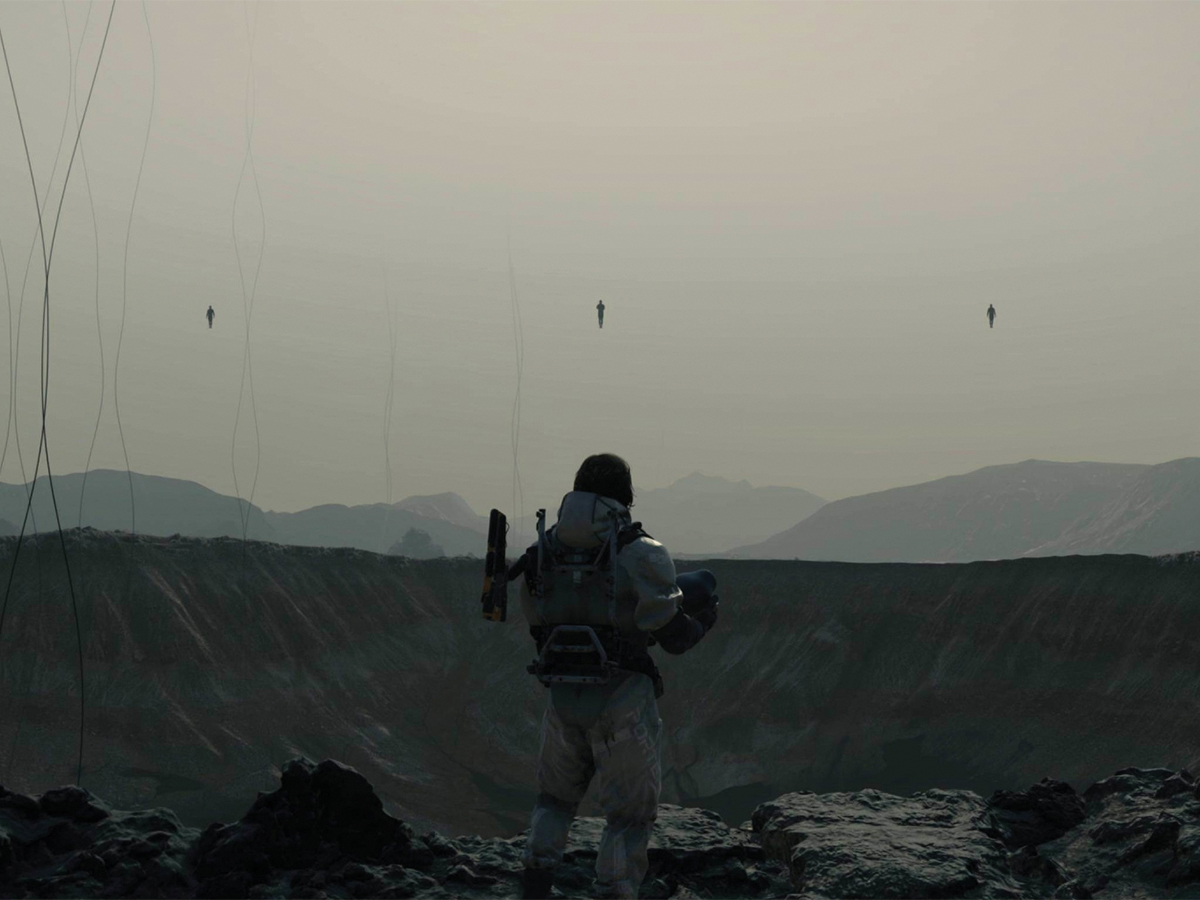 After three years of much speculation and debate, gaming icon Hideo Kojima has finally delivered his newest title, “Death Stranding.” Kojima’s focus on cinema and theater in “Death Stranding” is utilized to great effect to change the landscape of what games can achieve. Despite being released to much fan praise, it was also met with some criticism by reviewers as its gameplay has been called repetitive and boring. While critics have dismissed “Death Stranding” as just another art project, it is so much more than that; playing through the 30-hour experience was unlike any other game I’ve played.

The main attraction to all Hideo Kojima games is, of course, the gripping story — and “Death Stranding” is no exception. After the cataclysmic event known as the Death Stranding, the world of the living and the dead became connected. Invisible creatures known as Beached Things (BT’s), have wandered into the living world and consume people, causing massive explosions of antimatter known as Voidouts. Thanks to Bridge Baby (BB) technology that can detect BT’s, some safe overworld travel is possible. Thus, the overworld is dangerous, so only porters traverse the desolate expanse to deliver precious cargo and data. As Sam Bridges (Norman Reedus), a legendary expert porter, the player must traverse the broken lonely wasteland. Sent by President Bridget Strand (Lindsay Wagner), he must make his way to the west coast to connect the United Cities of America (UCA). Accompanied by many other characters, Sam is certainly not without help in the decaying world. Characters like Deadman (Guerillmo Del Toro), Mama (Margaret Qualley) and Fragile (Lea Seydoux) are such great side characters that help build the world along the way. Each character brings a new edge of depth to the story and reveal interesting tidbits about the almost extinct human race. Sam is opposed by terrorist leader Higgs Monaghan (Troy Baker) who threatens to take control of BT’s and cause a human extinction. More interestingly, however, is veteran Cliff Unger (Mads Mikkleson), who appears to Sam in visions and hunts him and his BB unit.

“Death Stranding”’s core gameplay involves the work of a postman, having the player bustle around the map delivering one thing after the next. Yet with the right tools and creativity, clever players will create new paths to be faster, better and more efficient in their delivery boy duties. The game allows Sam to change the landscape at his pleasing, providing him with ladders, ropes, bridges, generators, watchtowers, shelters and more. Most importantly is the Social Strand System, a term coined by Kojima Productions to describe the core gameplay. “Death Stranding”’s fixation on connectivity and an asynchronous multiplayer world is key. Players can contribute and utilize the efforts of every other porter across the world, thus giving access to each of those players’ structures, vehicles, resources and even lost cargo. When coming across other people’s structures, players can give likes to that specific player to show their thanks. Likes are also received by making structures of your own, leaving signs, providing resources to roads or even delivering lost cargo. This emphasis on connectivity invites players to be kind to others and pay their generosity forward, whether it be through likes or resources. This type of gameplay makes traversing the wasteland of America comforting as you journey alongside every other player.

The gameplay can be dull, yes, but it’s the world around the game that makes the experience well worth it. The game will only feel monotonous if players do nothing to change the world around them. This freedom highlights the enjoyment players will experience. Goodwilled porters will receive the best experience as they put in the time to assist others and change the world for the better. The quest for more likes, gear and vanity options becomes addictive and strangely therapeutic. The map is gigantic and its scale can be overwhelming at times. A wide variety of terrain challenges and weather impairments present themselves as Sam travels onward to complete his next delivery. As you gather more resources, build trucks and roads, the game opens up and allows for players to fully explore the open world map. Even after completing the game, I was still wanting to check on the UCA and deliver any outstanding orders. I definitely understand how many will be turned off to the gameplay, but the story is what ultimately kept me coming back to the desolate world.

Each actor depicts their character quite well, especially in cutscenes where the full scope of their performance is portrayed. Norman Reedus is great as the hesitant but willing protagonist. Reedus lends his charisma to Sam in every scene he’s in and he adds some funny quips to break up the monotony of travel. Mads Mikkleson especially does a stellar job at portraying Cliff as his character undergoes serious development toward the end of the game. Tommie Earl Jones gives a powerful and heart wrenching performance as the mysterious Die-Hardman who leads Sam onwards. Troy Baker’s performance was one of the best, as he portrays the maniacal terrorist Higgs to great effect. You truly believe that Baker is actually crazy during his deep soliloquies. The use of motion tracking and real time face tracking highlighted each actor’s performance to the next level. Emotions, expressions and reactions are all very realistic and cinematic due to the production of the game’s cutscenes and film aspects.

The soundtrack of the game is impressive and evokes a somber feeling as players feel the loneliness of a fragmented UCA. The indie alternative rock music provided by Icelandic group, Low Roar, is a great fit for the game’s overall tones and themes. As a music buff, Hideo Kojima is no stranger to including licensed music in his titles, and for “Death Stranding” he definitely made the right pairing. Each track utilized speaks to one or more of the games motifs, and it shows in those formative moments. When progressing in the game, various tracks are played over the game that evoke a special emotion in players as they traverse through the barren, lonely wasteland of America. Notably, tracks like St. Eriksplan and Bones are such powerful and gripping musical pieces that are utilized perfectly to set the tone of the scenes they are placed in.

“Death Stranding” is a different kind of game that tells a story worthy of your time. It’s a creative and intuitive project that offers players a vivid experience that can feel foreign at times. While the gameplay can feel tedious, it only gets better as players trudge onward. Overall, the game left me thinking about its world and various themes long after I had finished it. That’s more than can be said about the forgettable triple A games that get released every year.

“Death Stranding” finally shows us Hideo Kojima’s vision for a project that blends cinema and gaming. It is a cinematic sci-fi experience that will challenge the preconceived notion of what video games are capable of.