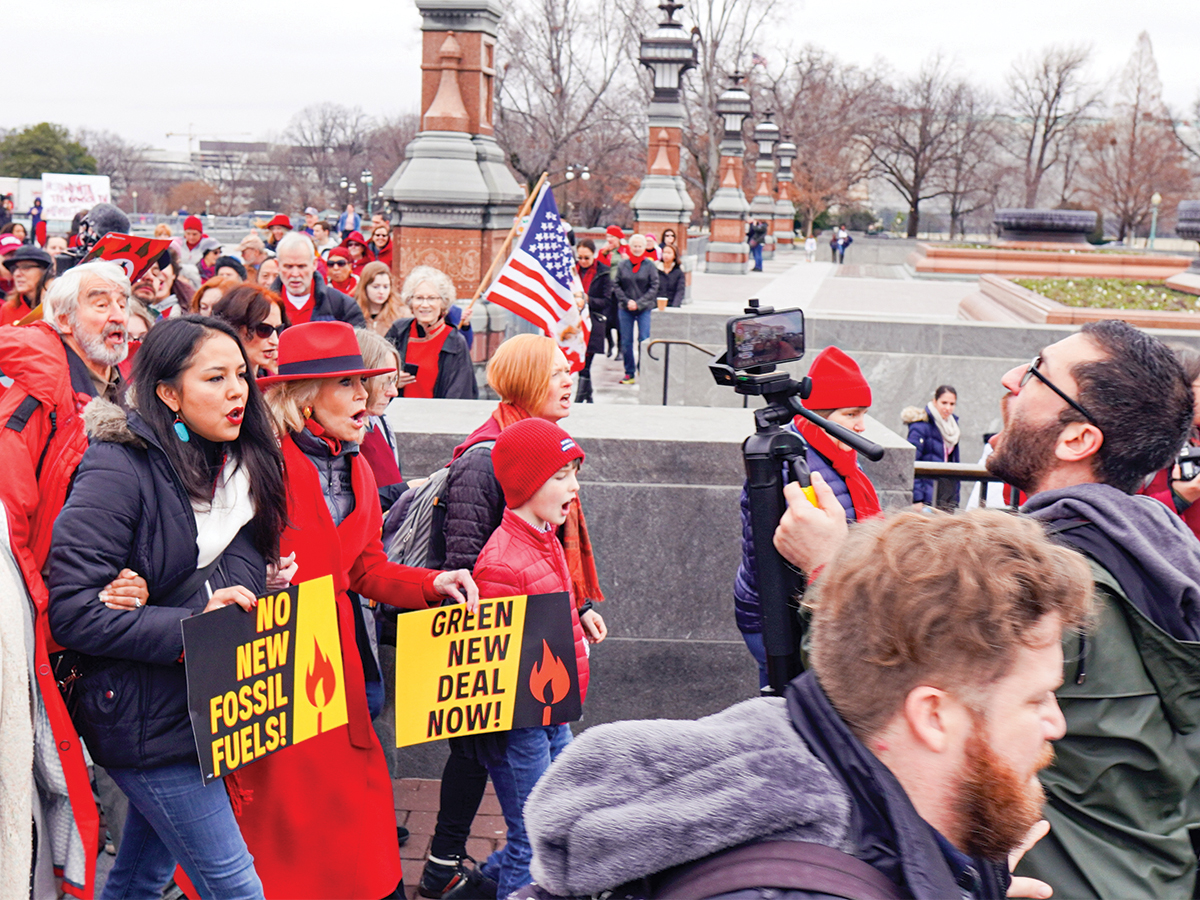 Two-time Oscar winner Jane Fonda spent part of her 82nd birthday in a Washington, D.C. jail this past December. This wouldn’t be the first time the celebrity has been cuffed and detained, though not for the reasons celebrities usually are. This will be Fonda’s fifth arrest since she began protesting climate change through displays of civil disobedience back in October of 2019. Inspired by youth climate activist Greta Thunberg, the star has devoted herself to going out every Friday and getting arrested for protesting in front of the Capitol Building in an effort to raise awareness of the world’s current climate crisis. The protests are set to continue until she resumes shooting the seventh season of “Grace and Frankie” in early January 2020, and though her intentions seem honest, some have suggested that the protests are little more than an extended publicity stunt. Regardless of whether or not this is true in Fonda’s case, her recent demonstrations have prompted discussion on what “celebrity activism” should look like.

It would be erroneous and mean-spirited to argue that celebrities, as a rule, cannot be trusted to be proper activists simply because of their star status. History has not only shown such a line of reasoning to be untrue, but that celebrity star power can, in fact, have a substantial impact on contemporary issues. Beloved actor and former NFL star Terry Crews’ decision to speak out about his own experience with sexual assault has helped bolster the #MeToo movement by demonstrating that sexual assault is a serious issue that affects people regardless of gender or status.

Even celebrities who aren’t typically pegged as the activist type have been known to champion meaningful causes. Notably, Kim Kardashian West advocated for prison reform and, more specifically, the commutation of Alice Marie Johnson’s prison sentence. Johnson was originally sentenced in 1996 for her participation in drug trafficking, as she was alleged to have let those involved in said drug trafficking make use of her telephone. Compelled by Johnson’s story, Kardashian West went so far as to meet with Donald Trump in an attempt to convince the U.S. president to commute Johnson’s sentence — an attempt that would have been impossible without her celebrity status. Trump pardoned Johnson soon after, and Kardashian West has since continued pushing for prison reform.

In spite of the recent criticism, Fonda herself appears to be making a commendable effort in her fight to raise awareness about climate change. Whether one agrees that her particular method of protest is effective or not, it isn’t hard to see the reasoning behind her mass-arrest tactics. Fatigued by the Trump administration’s refusal to acknowledge the dangers of climate change, Fonda has spent the last three months organizing protests from a hotel near the Capitol Building.

And this isn’t the first time Fonda has championed a cause. The actress has an extensive history of activism, dating as far back as the 1970s when she opposed the war in Vietnam. She has put her celebrity weight behind a host of other causes since then, from civil rights to women’s rights. Looking back at her activist track record, it would seem that Fonda’s heart is in the right place.

That being said, while Fonda may have her mind set on achieving substantial change, some celebrity “activists” appear to have greater concerns. Before showering celebrities with effusive praise for supporting a cause, one should always ask themselves who is benefiting from this activism. A grassroots event can quickly turn into a photoshoot. Brand promotion is a chief concern for most celebrities, but lazy activism for the sake of building one’s platform can be incredibly damaging to a cause.

Intentions be damned, it is all too easy for a celebrity’s “star power” to overshadow the work countless other activists put into the cause. This is something that Fonda is acutely aware of, as is evident in her hesitance to join organizations like Greenpeace for fear of stealing attention away from young activists. But other celebrities, like the musician Bono, who was awarded “Woman of the Year” by Glamour in 2016 for his support of causes like Poverty is Sexist, appear less concerned with their potential for diverting attention away from the very thing they are advocating for. It seems as though every celebrity has their own cause celebre these days, but a lackadaisical approach to activism should suggest to viewers that the celebrity’s intentions may not be as noble as they would have one believe.

To further highlight the perils of celebrity activism, as time goes on, Fonda’s own demonstrations may be losing steam. An article in the New York Times describes Fonda’s decision to abstain from a recent protest so as to avoid 30 days jail time, which has led some to doubt the sincerity of her dedication to the cause. Furthermore, law enforcement’s response to the protests has been tepid at best, with police more amused with the protestors than anything else. Another article explains that, during one protest, a shorter bus was used to transport arrestees so that the aging Fonda might have an easier time boarding it. Media coverage is now all too concerned with superficial details like these, diverting attention away from the original impetus for the protests: climate change.

A celebrity receiving a slap on the wrist does not carry with it the kind of weight needed to get people to care about these issues, and the last thing protestors want is for Fonda’s days of civil disobedience to turn into the publicity stunt so many have accused it of being — in the headlines today and then swept into obscurity with next week’s news rush.

As is the case with all forms of activism, the cause should always come first. The attention a celebrity brings to an issue is undeniable, but the celebrity themselves should never attempt to become the central focus of the news coverage. Of course, this is a two-way street, and just as celebrities should be careful not to smother the movements they support, the media must be careful to direct the spotlight towards said movements. To be sure, it’s great to see Jane Fonda, Ted Dansen and other celebrities show interest in issues that impact the world on a global scale, but they shouldn’t always be in the headlines.

Celebrities have been partaking in activism for decades. Climate change will not end because Jane Fonda, or any other celebrity for that matter, said it should, but society shouldn’t discourage celebrities from being outspoken on these issues. Star power can be a useful tool for gathering support as long as the main message isn’t obscured. At the end of the day, if somebody’s love for Fonda’s “Grace and Frankie” ultimately results in them educating themselves on the looming threat of climate change, it’s going to be hard to complain.