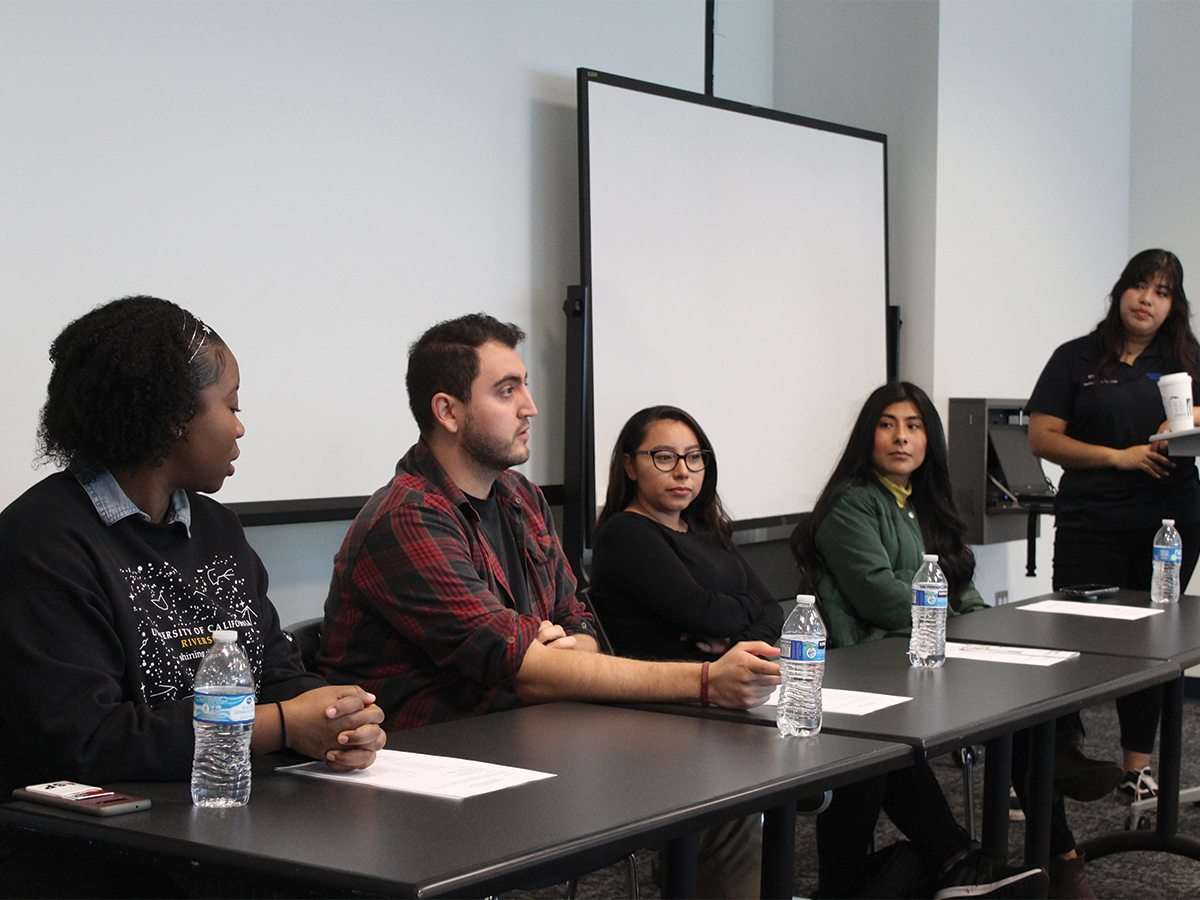 The four students on the panel were Deidre Reyes, a public policy major and transfer from Mt. San Jacinto College, Raymond Jimenez, a business major and transfer from Santa Monica College, Nayeli Salazar, a double major in spanish and education who transferred from Riverside Community College and Jessica Perez, a neuroscience major with a minor in mathematics who transferred from Pasadena City College. The panel was moderated by Silvia Ferrer, a member of the Transfer & Non-Traditional Student Committee for ASUCR.

The panel gave advice to incoming transfer students about what they would do differently if they were able to go back to their first quarter here at UCR. Jimenez told the audience that he wished he would have gotten involved sooner, which garnered nods of agreement from the others in the panel. Reyes began by saying that she would prioritize the quarter a bit more and ask for help sooner stating, “by the time I realized I was sinking the ship had already gone down.”

They also emphasized the importance of asking for help and taking care of yourself in the process. “The challenges I think I really faced was that the quarter system was so fast. Basically, I felt like I was doing homework 24/7 and nothing else. I didn’t realize that I was going through fatigue … I wish I would have taken breaks,” stated Jimenez. Reyes added, “If you don’t take care of yourself you are going to fall apart.”

Getting involved is often a struggle for transfer students because of the short amount of time they have on campus. Jimenez, who is a transfer mentor for the School of Business and a member of the Association of Latino Professionals for America (ALPFA), stated that he did not begin getting involved until winter quarter of last year and he wished he would have done it sooner. He advised students to look for clubs and organizations that they can express themselves with and to ultimately, “go out and go for what (they) want.”

When it comes to more social events, a student in the audience mentioned that as a commuter they often feel left out because they want to get involved but cannot when most events are held in the evening. Reyes stated, “It just has to be a priority for you and you have to work it in to your day.” Salazar added that she often goes back home during the day and coming back to campus for an event can be difficult but having organizations schedule events earlier in the day would make it easier. Jimenez acknowledged that sometimes it is up to the student to look for events. He gave an example of the room they were sitting in stating, “a lot of the things that we’re talking about are helpful, but there are empty seats.”

One common struggle that was shared among the panel and for students in the audience was trying to get the classes they needed in order to stay on track and graduate in two years. Salazar gave an example of her first quarter at UCR where she was able to talk to her department and get into the class she needed but added, “as transfer students it’s tough and you have to be on top of your stuff or you’re going to fall behind.”

Eric Calderon, the director of the Transfer & Non-Traditional Student Committee, stated from his place in the audience that this is an ongoing problem for transfer students. He said, “For us, it’s kind of hard to answer that (question) because we are all victims of a flawed system,” but through these common struggles are where they can unite and become advocates for one another.

After the panel, in an interview with The Highlander, Calderon stated that these student panels are important because the only people who can truly speak to the transfer student experience are other transfer students. “If we were to ask administration or staff they would be a little bit blinded to the experience because they’re the ones orchestrating it,” stated Calderon. He added that it is about hearing the experience of other students who already know what classes to take, what scholarships are available, student resources because it has so much more power coming from students.

The biggest lesson Calderon has learned from his time at UCR is that time is precious and there is not enough preparation. He mentioned that when transfer students get to a university, resources are limited and often times their transitions are not as enthusiastic and emphasized as they are for incoming freshmen. “For incoming transfer students they tell you to not put too much on your plate but your time is so limited … if you don’t get involved immediately then time’s up,” added Calderon.

According to Calderon, the transfer story requires different focuses and conversations because each one is so different. They may be older, parents, veterans and they may feel that they do not belong because of these differences. Calderon added that many times, even asking a transfer student “what year are you?” can be difficult and not inclusive to those who took a long break after high school.

Calderon emphasized the importance of transfer students making their two years on campus as successful as possible and getting more students on boards to help advocate for one another. However, he recognizes that it may be difficult given the short amount of time they have. He added, “The transfer story is a story of redemption and telling yourself it’s not too late.”

Editor’s note: The moderator for this event, Silvia Ferrer, is the copy editor for The Highlander.