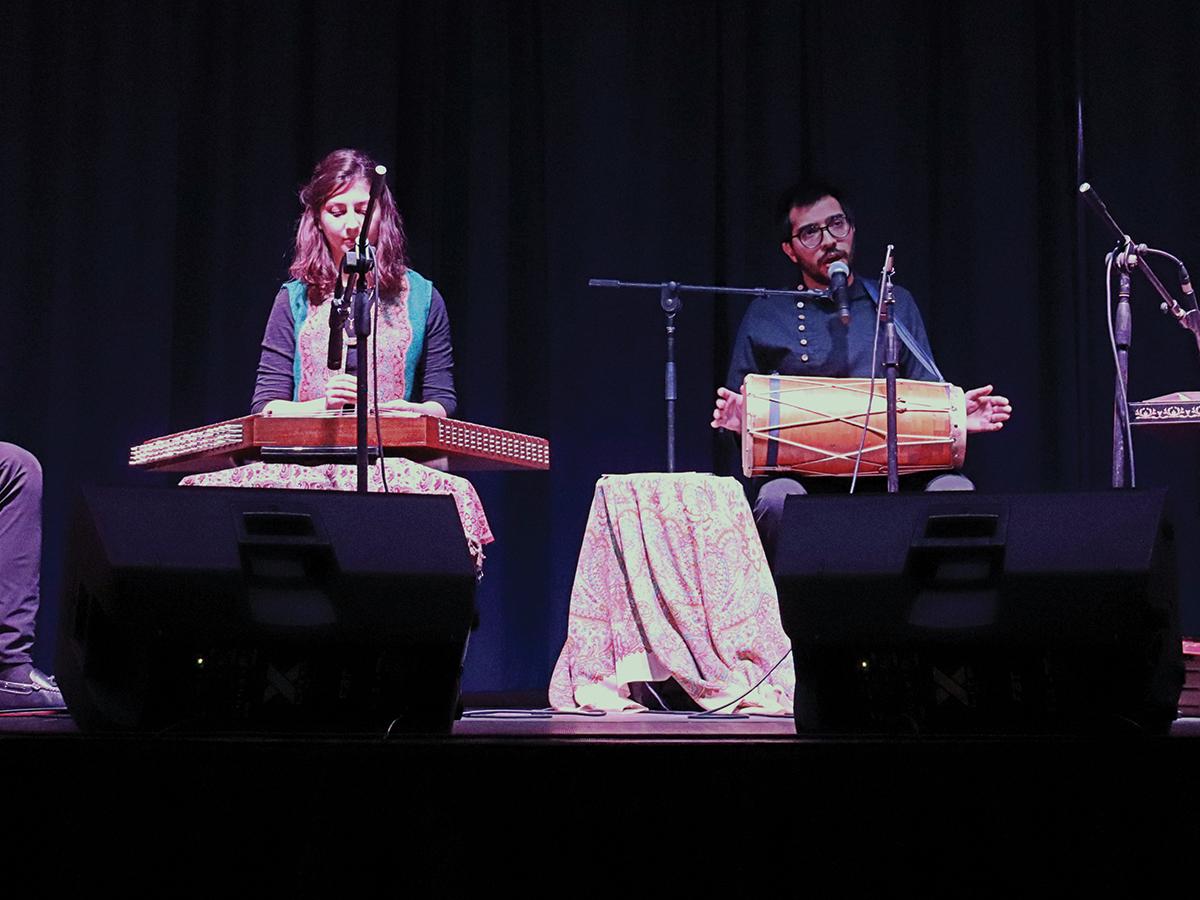 On Thursday, Jan. 30, at 6:00 p.m., a crowd of students gathered in front of the doors of HUB 302S, anticipating an unforgettable night. Hosted by the Middle Eastern Student Center (MESC), Sounds of Iran was a night of traditional Iranian music, dance and food.

The MESC takes great pride in uniting friendship and the celebration of Middle Eastern culture through the 20 different Middle Eastern organizations on campus and the event showed it. When the doors opened, a row of chafers filled with Mediterranean dishes such as Greek salad, pita bread, basmati rice, oven-roasted tomatoes and more delicious aromas filled the room. Students in line kindly distributed plates throughout the night and seconds and thirds were highly encouraged.

The first performance began after a warm welcome given by Ali Saadat, the student development specialist of MESC. Students sat with their generous food portions, chatting and laughing while a band called the L.A. Daf Ensemble made their way up on stage. They wore beautiful long white gowns bedazzled with detailed gold jewelry. Each playing the traditional Persian and Arabic frame Daf drum. They tapped the drum with their palms and fingers with an occasional shake of the instrument to make a tambourine-like sound from the cymbals attached to it.

After a couple of songs, two dancers from the Melieka Dance Academy collaborated with them, dressed in bright green-blue and red gowns, dancing elegantly with long, wave-like shawls, encapsulating students into cheering and whistling, which was Katrina Santos, a third-year biochemistry major’s favorite part. “I came to this event because I wanted to learn more about Middle Eastern culture. My favorite part is how genuinely engaged everyone is. All of the cheering and clapping helped give it a feel-good atmosphere,” she stated. Not knowing much about Middle Eastern culture, Santos came to the event because the school poster said it was welcome to all and it’s safe to say she didn’t go home empty handed.

The second performance was done by a band known as the Taak Ensemble. They played both traditional and classical music of Iranian origin. Some of UCR’s Middle Eastern students sang along and clapped to the beat throughout the entirety of the songs. Mahtab, one of the group’s musicians, tuned her Santur (an instrument that can hold up to 72 strings) while the group’s lead singer Hesam exchanged friendly conversation with the loud audience. He endlessly voiced his appreciation of the lively night and the audience made sure to also express their gratitude, yelling back “You’re amazing!” and “You’re kind!” He also mentioned that Rambod the drummer, who plays both the Daf and Tombak, is an alumnus of UCR which resulted in even more clapping and cheering. An encore struck up toward the end of their performance in which Hesam stated that the last song represented the diversity the crowd shared that night.

Toward the end of the event, the L.A. Daf Ensemble and the Melieka Dance Academy returned on stage to perform more of their music. The dancers were again dressed in their brightly colored gowns and encouraged the crowd’s clapping and cheering. After a couple of songs, almost the entire crowd got up and banded together to perform what electrical engineering graduate student Ehsan Samani enjoyed the most about the evening, the Kurdish dance.

Students of all identities kicked their feet in the air while moving in a circular motion around the conference room. A handful of students looked for guidance in the moves of students who were more knowledgeable of the dance, but nonetheless, all were in smiles as the Ensemble and academy dancers continued to perform on the stage above.

After the dance, Samir al-Alami, a fourth-year political science major, reflected on the event, all-together recognizing that it is “really, really valuable to see that this event shows more about this community than what they are stigmatized to be. That they are more than the political tensions that have lived on in our modern politics for more than four decades. I think it is really special that we can all come together and appreciate and have a beautiful time.”