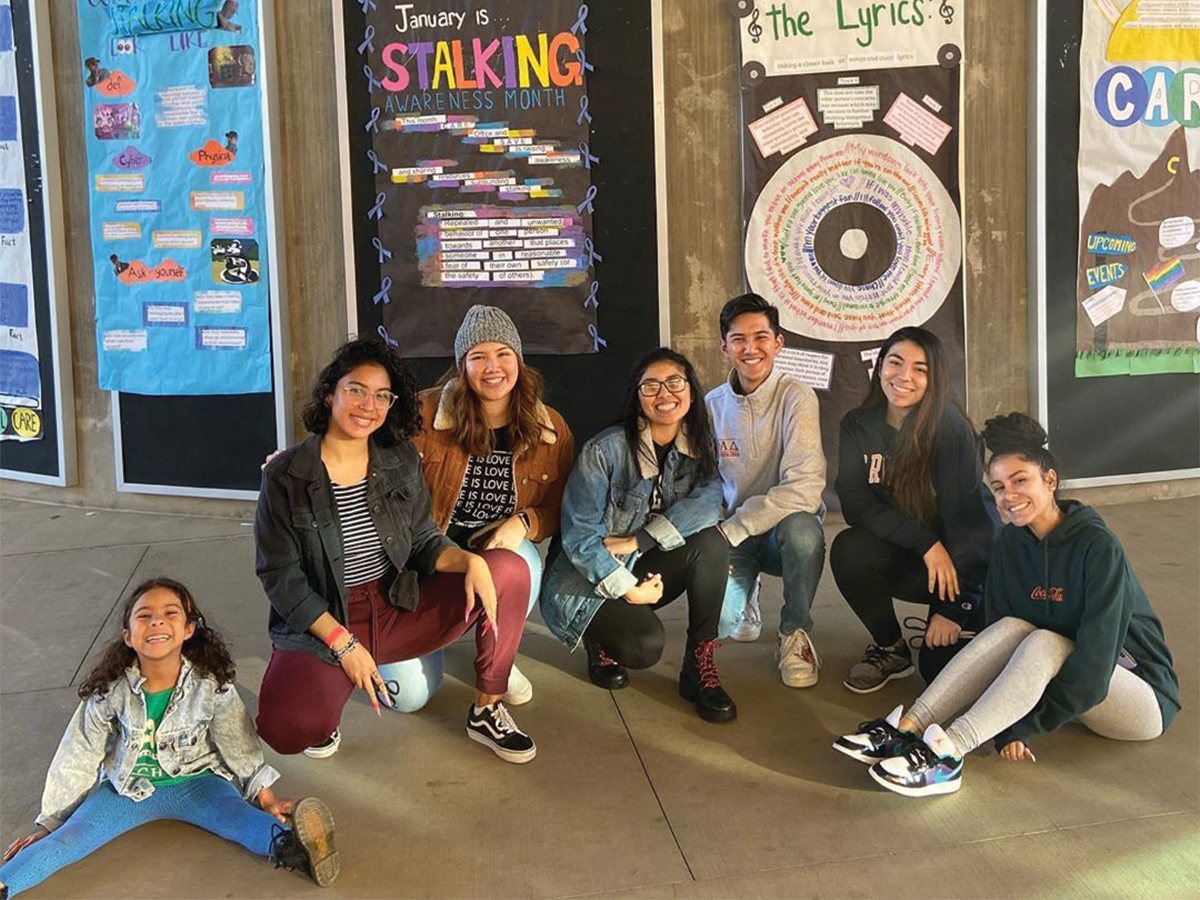 At the beginning of January, vibrant posters decorated the walls outside the Transfer and Commuter Lounge with messages encouraging students to “read between the lyrics” and to learn how to recognize the signs of stalking. After creating their Stalking Awareness Month display, the Campus Advocacy and Resources Education (CARE) program moved to their social media accounts where, throughout January, they posted and shared different facts about stalking and the behaviors associated with it. CARE finished off the month with a specially themed CARE Conversation on Tuesday, Jan. 28 at HUB 367 from 12 p.m. to 1 p.m.

After students were seated with free pizzas and CARE-themed stickers, the Sexual Assault and Violence Education (SAVE) peer educators began the discussion with an icebreaker. Students talked among themselves about what their personal definitions of stalking are. From there, the discussion opened back up and students were asked about the differences between stalking, lurking and cyberstalking.

“Our office and our student peers really wanted to focus on stalking because we wanted to educate the campus a little bit more about what stalking is,” said Lisa Chu, violence prevention coordinator. “I think that we don’t get enough information about it and some people aren’t too aware of exactly what it looks like and entails.”

The next activity was scenario-based. SAVE Peer Educator Mitzi Aguilar would read aloud a hypothetical situation and students would rate each one on a scale from one to five, one being “it would be considered fine” and five being “it is overstepping boundaries.” The scenarios included someone leaving unwanted gifts at your house while you’re at work, and waiting for you outside of class when you never told them which class it was. Majority of the scenarios were rated a five by all the students in the room, but also it was agreed upon that context in each scenario mattered as well.

A recurring topic throughout the discussion was how the media and movies have romanticized stalking in movies and TV shows. Shows like Netflix’s “YOU” and movies that are traditionally considered romantic like “The Notebook” all showed moments where consent was ignored and lines were crossed. Actions like hanging off a ferris wheel until a person agrees to go on a date with you may seem romantic in the movies, but as the students chatted, they came to a realization how strange and terrifying it would be in real life.

“We think about stalking in a way that a stalker is supposed to be a creepy person just staring at you or following you but it’s really not like that. It is a lot more common and it really can be anybody and we’re just not aware of it,” stated Aguilar.

One student asked for recommendations of romantic movies that show healthy and realistic relationships. Someone shouted out the name of Netflix’s “To All The Boys I’ve Loved Before,” but Aguilar pointed out how there is an example of a boundary being crossed in that movie as well. As the conversation came to a close, the SAVE peer educators encouraged their fellow students to practice recognizing these red flags in the media they watch.

“I thought today was really important because we don’t get to talk about toxic environments that we portray in the media and this was a perfect environment to bring it to light. It was a welcome reminder to healthy habits,” said first-year political science major Lauren Marquez.

The UCR CARE office provides support for any student that may be experiencing stalking and can inform students about their options. Next week marks the beginning of CARE’s Sex Week, from Feb. 10 through Feb. 14. Sex Week is a collaboration with The Well to help destigmatize the topics of sex and their first event, “Feels and Heels,” is Monday, Feb. 10, at ATHD 102 at 11 a.m.