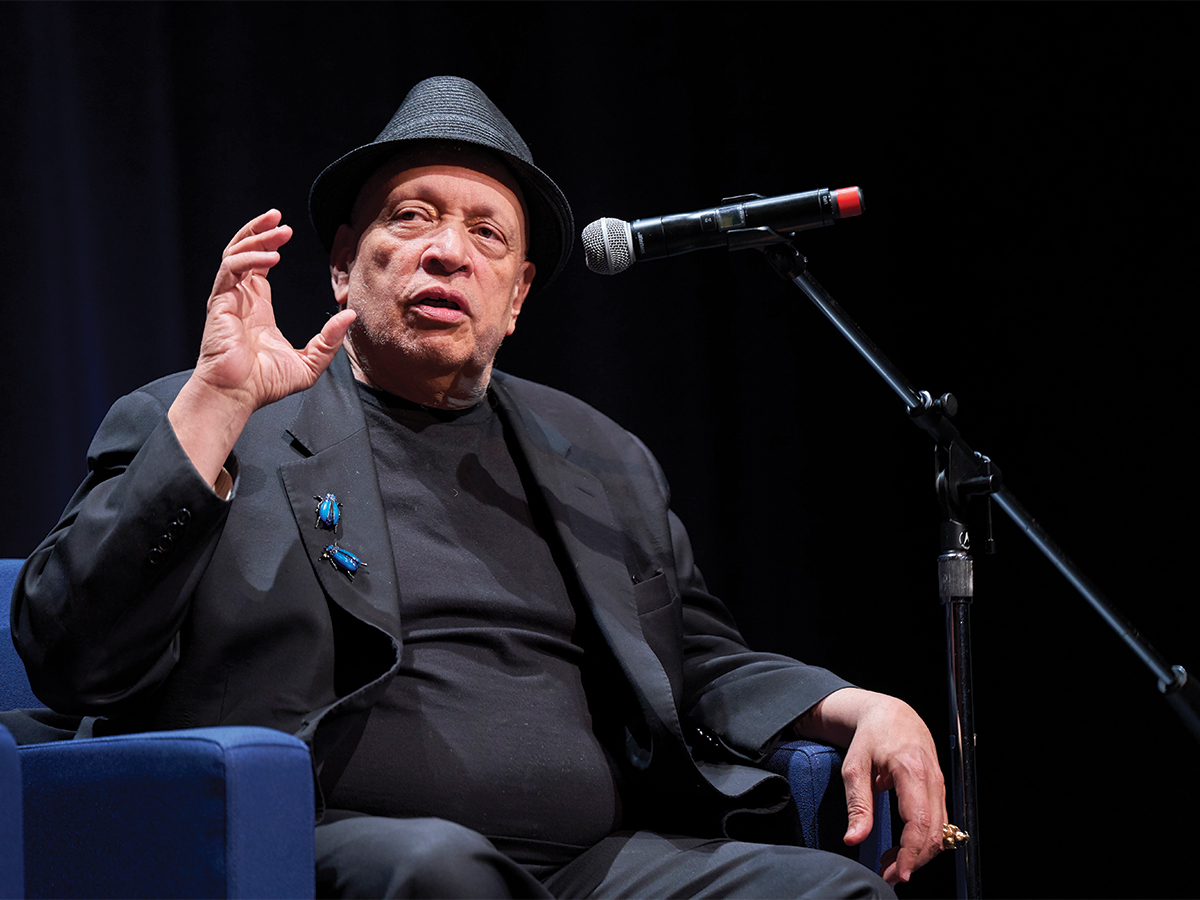 Over 40 books in 30 years, and all his struggles in between

UCR held its 43rd annual Writers Week all throughout the week of Feb. 9, with mystery writer Walter Mosley as the kickoff headliner speaker. Students and outside visitors alike took their seats in the University Theatre, some coming in just to see Mosley in action, and others coming in for writing assignments. Jamal Ogans, a first-year political science major, heard about Writers Week from his creative writing professors. “It’s for an assignment, but I think it’s also pretty cool to see a published author,” he noted.

Tom Lutz, chair for the department of creative writing and Writers Week director, began the event at 7 p.m. by thanking everyone for coming out and handing the microphone to Chancellor Kim A. Wilcox. Wilcox introduced Mosley as “an iconic figure in science fiction, fantasy, detective and fusion, an author of over 50 books, TV and film projects.” He mentioned that Mosley had one of the bestselling historical series with his recurring character Ezekiel “Easy” Rawlins, an African American detective that persists throughout Mosley’s mystery works starting with “Devil in a Blue Dress,” which was turned into a movie and starred Denzel Washington as Easy.

Mosley’s won an O’Henry Award, a Grammy Award and 10 America’s Lifetime Achievement Awards, earning another of the latter, the UCR Creative Writing Lifetime Achievement Award. As Mosley took his seat, the other was taken by interviewer Steph Cha, author of “Your House Will Pay,” a fictional bestseller on a Korean American and African American managing the aftermaths of Rodney King brutalized by police.

The night started out and stayed humorous, as Mosley joked if getting a Lifetime Achievement Award meant that “life was coming to an end” given the name. When asked about how many more stories he planned on making, he said he aimed for an “even hundred,” but upon reaching 99 that he’d take a long break.

Talking about past Lifetime Achievement awards, Mosley mentioned that he received one from multi-literary media group PEN America. When accepting it, he told the audience at the time that “‘You people need some people of color in the room. Why’s there so many white people here?’ And they didn’t like that,” he reflected. “I still got the award though,” he finished, to which the audience of students and locals laughed aloud at.

After discussing his plethora of past awards, Mosley went into how he came to be a novelist, which he said wasn’t at all what he planned for. “By the time you’re 35, if you haven’t done anything, regardless of what’s reality, you begin to think of yourself as a failure,” Mosley noted. “But it’s a great feeling to feel like a failure and then be successful,” he countered himself.

Back in his college days, Mosley was kicked out of Vermont’s Goddard College. He later majored in political science at Johnson State, something that Cha contrasted with Mosley’s current field and asked about how it felt “shifting into this kind of very focused career doing this one thing at ridiculous speed and skill,” and if he just sort of ambled into it.

Mosley disagreed, citing Californian culture as the reason. “If you’re from anywhere else, you got to get your stuff together very quickly,” he started, but said that in California, no matter your age, if you could still touch your toes, you might think “I’d like to study ballet.” It was that sort of thinking that spurred Mosley to think “Maybe I should be a novelist,” and even then he didn’t expect to write a short story, let alone be published to start with.

Mosley faced difficulties with publications, such as those with his book “Gone Fishin’.” It’s a coming-of-age story featuring Detective Easy and was called “good writing, but not commercial,” which Mosley jokingly dissected for true meaning: “white people didn’t read about black people; black women didn’t like black men; and black men didn’t read, so … ” he trailed off as the audience chortled.

But the topic of racial inequalities turned more serious as Cha touched on “American Dirt,” a story that has “generated conversation on the state of publishing and how a lot of things haven’t changed.” In 1998, at the City College of New York, Mosley asked for and got established the Publishing Certificate Program to help people of color and minorities at the school get involved with the field. Mosley pointed out that “a lot of people of color get into publishing, but leave because they don’t have people they can talk to; not necessarily people of color but just people they know, connections,” he said.

Mosley stated that because publishing has historically never been government-funded, publishing companies never felt obligated to hire people of color. Personally, in a disconnect from global ethnic tags, Mosley doesn’t “believe in the existence of white people, in the same way there’s no such thing as a black or yellow person,” and that it’s not fair that there’s this sort of white requirement to be successful.

Before the floor opened up to audience questions, Cha asked if Mosley ever hit any low points in life, to the point that he wanted to stop writing. “I’ve never wanted to stop writing,” he plainly stated. “It’s really a wonderful thing for me, it’s an exploration and I think that the uniqueness of one’s personality becomes more and more refined by the work itself.” The first question from the floor was not a question, but an appreciation from a local.

“You write about sex, drama, murder, but in ‘Devil in a Blue Dress,’ there’s this: ‘The San Bernardino rain is the most beautiful in the fall, the high winds get rid of all the smog and the skies take your breath away.’ All the drama and all that stuff is great, but that’s the Walter Mosley I read for.”

The event ended around 8:30 p.m. At the book signing afterwards, Walter gave a piece of advice to aspiring writers: “Write every day. Just write, just write, just write and everything else will follow that, like the jab in boxing.” As an author of over 40 books, written over just above 30 years, Mosley lives up to that tip to a tee.