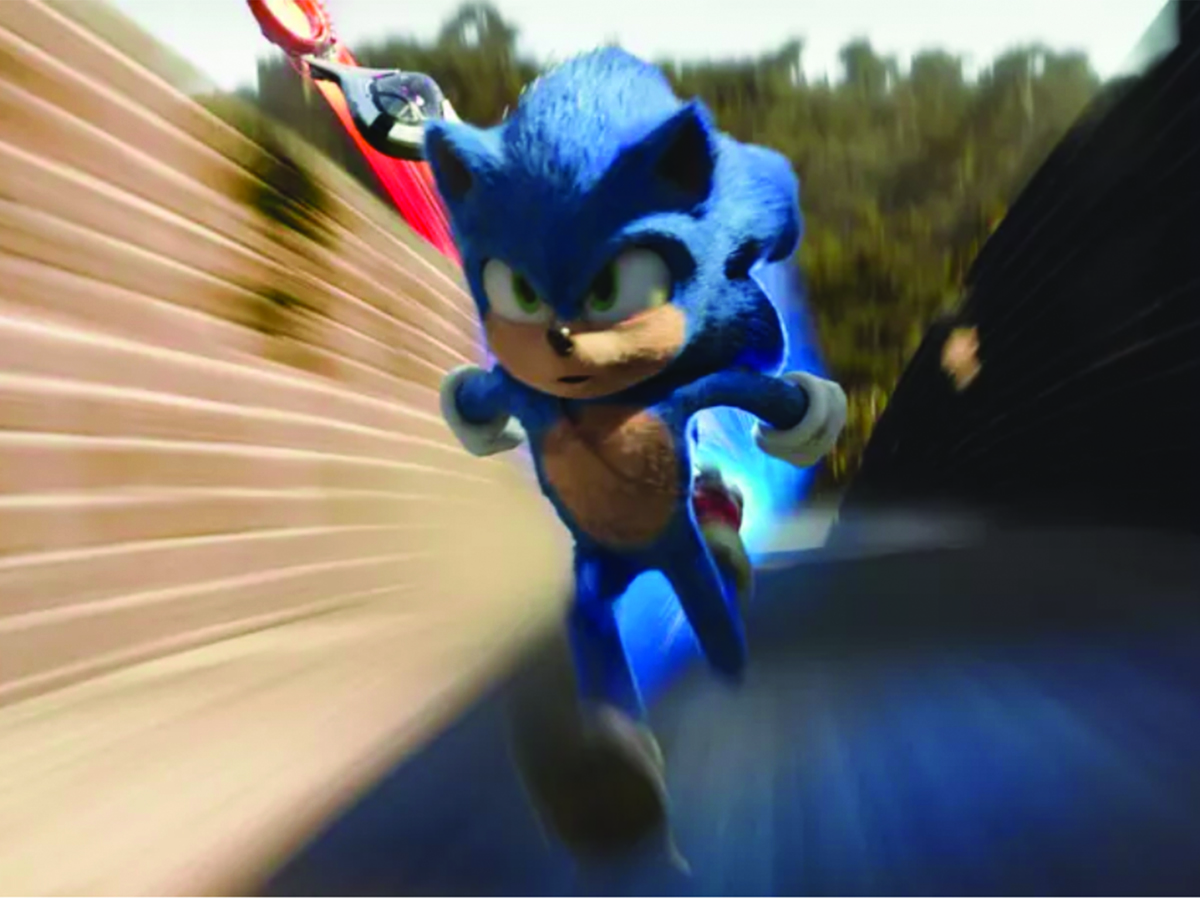 The blue hedgehog zooms onto the silver screen with his first feature length film. Paramount’s “Sonic the Hedgehog” has finally arrived in theaters for better or worse. With a rocky production cycle wrought with redesigns and reshoots, the film has been released to much anticipation. With video game films finally back to receiving positive reviews, like “Detective Pikachu,” for example, Sonic seeks to carry the torch with his very first live-action outing.

The overarching plot is simplistic in nature. After escaping from his home world, Sonic (Ben Schwartz) finds himself in Green Hills, Montana with no friends or family to accompany him. Yet problems arise as he accidentally causes a blackout, prompting the U.S. government to investigate by sending the brilliant but crazy Dr. Robotnik (Jim Carrey). To elude the authorities, Sonic attempts to leave Earth by using his rings that can teleport him to different worlds and locations, but after encountering Tom Wachowski (James Marsden) he drops his rings through a portal onto a high rise in San Francisco. Sonic then befriends the Green Hills’ sheriff, who assists him in escaping Robotnik’s grasp and leaving Earth. Thus, the unlikely duo speed off on a journey full of hijinks and madness.

The structure of the film is quite jumbled as our two main characters embark on their grand journey to San Francisco. Their adventure takes them to several different set pieces that all feel unconnected and unnecessary. It’s a very generic plot that only really serves as a way to fill the hour and a half runtime. For a series that’s known for its imaginative and creative settings, it’s sad to see the film lock itself into Earth for practically the entire film. Apart from that, the most jarring inclusion to the film are the strange product placements that feel extremely forced. It’s definitely one thing to include brands in a film, but this movie includes full lines of dialogue that feel out of place.

Some of the acting talents featured in the movie are great, however. Jim Carrey easily steals the show with an excellent performance as his comedic lines and brilliant insanity is captured perfectly. Despite that, I was very lukewarm on James Marsden’s character; he mainly served as an audience stand-in for Sonic to play off of. There was little chemistry between the two and many of their emotional scenes felt superficial. I did enjoy Schwartz’s voice acting talents for Sonic. By no means is he the greatest actor to lend his vocal cords to the blue devil, but his portrayal is serviceable and humorous at times. Aside from the main characters, all other inclusions are tangential and very forgettable.

While the performances aren’t all bad, some of the humor doesn’t quite land. In classic Sonic style, he never stops talking and cracking jokes, which can be grating at times. Even some of the jokes feel dated and cringey as Sonic is constantly making pop culture references. Yet, most of Dr. Robotnik’s lines are well executed thanks to Carrey’s great acting. He certainly is trying his best to lend his creativity and ridiculous attitude to the character, which works in many scenes.

One of the redeeming factors to the movie is of course the visual effects. After facing backlash from fans, Paramount decided to redesign the blue blur to be more in line with his classic design. The work done by veteran Sonic animators Marza Animation Planet and Blur Studio is truly fantastic. The film takes full advantage of it’s various reshoots and new scenes to help its lackluster plot. Compared to the horrific original design choice, it’s a miracle the film looks as great as it actually does.

The original score for the film is unfortunately not as impressive. While fans might recognize a few remixed tracks from the source material, most other tracks are lacking. The film relies heavily on a whole host of licensed music. For a franchise that is most commonly identified with its strong sense of music, it’s disheartening not to hear any familiar tracks outside of the grossly overused Green Hill Zone theme. Possibly the oddest inclusion to the soundtrack is an original song called “Speed Me Up” featuring Wiz Khalifa, Lil Yachty, Ty Dolla $ign and Sueco the Child. While hip-hop certainly isn’t a genre of music Sonic is unfamiliar with, the track itself feels out of place for a movie targeted at a young generation.

“Sonic the Hedgehog” is certainly a better video game film than most others. Despite the derivative plot and dull humor, the movie is a fun cheerful experience. It never crosses any deep themes or connections, but it wasn’t trying to. The film was made for kids and it succeeded at making an exciting film for the younger crowd. The visuals are pleasing and some scenes are genuinely entertaining. While it takes very little from the source material, Sonic feels authentic and true to his character.

While not perfect, “Sonic the Hedgehog” is a lighthearted, fun video game film. The movie definitely suffers from a jumbled plot and misplaced humor. Still, it’s a great attempt for Sonic’s initial breakthrough to the live-action cinema scene.