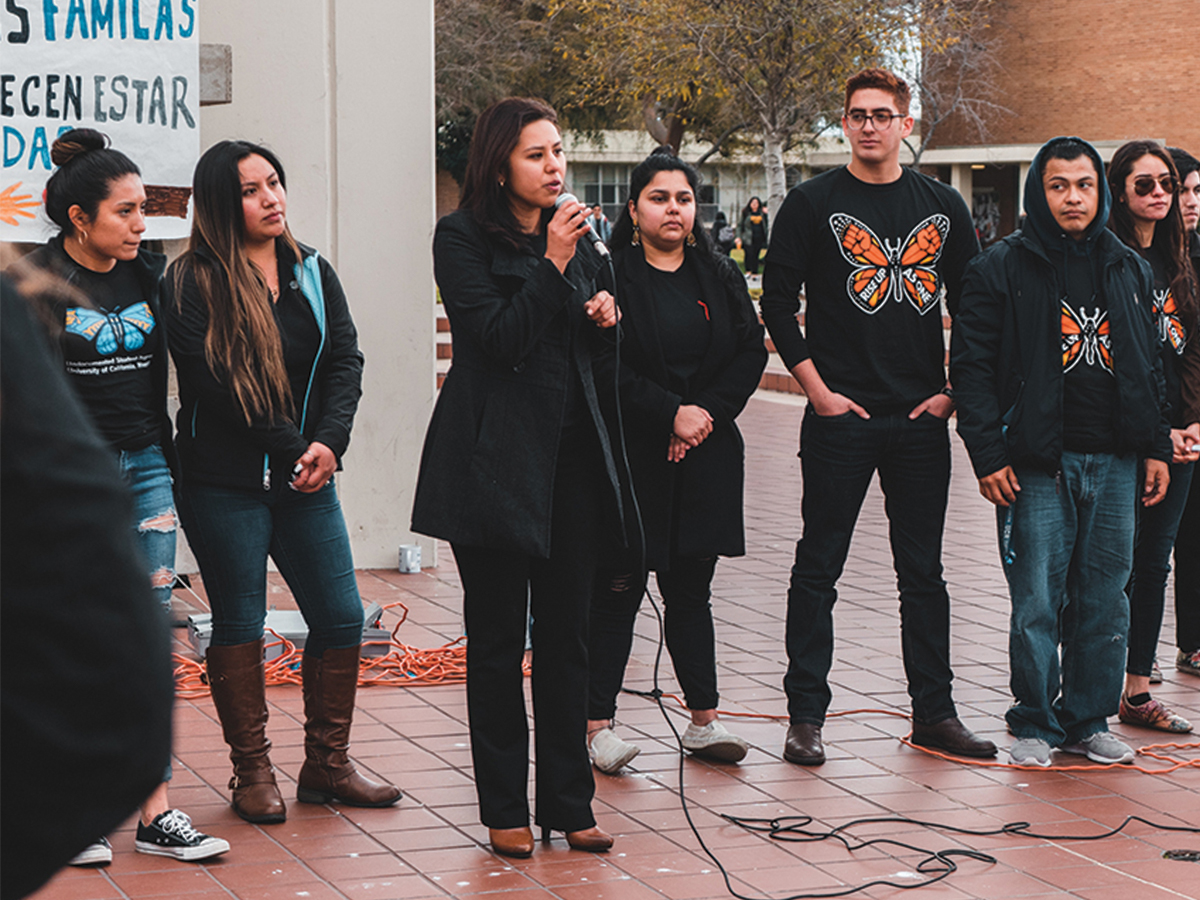 Co-chair of PODER wishes to uplift the voices and aid in the struggles of the undocumented, through her story

The Providing Opportunities, Dreams, and Education in Riverside (PODER) organization was established in 2008 “to educate the UCR and Riverside community about state and federal legislations affecting undocumented students,” says its online mission statement. Tania Gonzalez, a third-year Spanish and education major and co-outreach chair for PODER, has been a part of the organization since her first year at UCR; like many others she has worked through strife to stand where she is on campus today. As a part of PODER, she said that they “advocate for the undocumented students here on campus and in the Riverside community.”

Gonzalez wants UCR’s undocumented population to know that they are not alone. Last Wednesday, Feb. 19, Gonzalez and three other undocumented students opened up about their status and their story navigating undocumentation, wishing to promote solidarity among all in the same situation.

The event was hosted as part of PODER’s annual Immigration Awareness Week at the Bell Tower. The event, “Coming Out of the Shadows,” takes after a decade-old demonstration; “It began in Chicago in March of 2010,” she said, “when a group of undocumented students came out ‘undocumented and unafraid.’”

She was referring to the slogan that over a thousand people sported as they marched through the streets in that month of March, proclaiming their status in solidarity to remove the stigma attached to their undocumentation at the city’s Federal Plaza. It’s this kind of voice that Gonzalez encourages undocumented people at large to have, which she herself exercises by lobbying for change. “It’s not like since we can’t vote, we don’t have a voice in the Capitol. (The people in there are) still your representatives and they should be listening,” she stated.

Remembering when she spoke at the Bell Tower, Gonzalez noted that “It was a very emotional moment (because) I found my community here, found people who understood what I was going through; now I’ve got friends and people who can help me through tough times. I’m happy to be here, I found a place I feel that I belong in USP and in PODER.”

The Undocumented Student Programs (USP) center at Costo Hall 224 was created in 2015 as a resource center for undocumented students, be it printing and stapling or even scholarship opportunities. “The founders of PODER and the people working in the organization were actually those who fought for that center to be created,” Gonzalez added. She also noted that the center has recently gained immigration attorney Karina Gutierrez.

At the Bell Tower, Gonzalez shared her life story as undocumented students passed by. She entered the U.S. on a visa at the age of five with her younger brother and parents, and talked about the struggles she faced throughout school because of the language barrier. “I encountered racist, xenophobic teachers who tried pushing me down just because of it (language barrier),” she said. In eighth grade Gonzalez tutored a classmate that berated her for her efforts; “‘Why are you working so hard if you won’t be able to go to college?’” she remembered him saying.

When high school came around, Gonzalez found initial difficulty in applying for college: “In junior year I started thinking more about the question, and I tried talking to my counselors but they didn’t know how to help me, they didn’t have the resources to.”

She then took matters into her own hands, with the support of her parents despite neither of them having gone to college. “Senior year, I found out I could get financial aid through the California Dream Act. I actually got help from Cal State San Bernardino to fill out the application alongside college applications, and now I’m here … as you can see that classmate was wrong,” she reflected.

Both USP and PODER provide assistance to UCR’s undocumented community. As for PODER, “we hold three main events for outside and campus community,” Gonzalez said, one each quarter. “Every fall quarter we hold a conference for both high school and community college students to learn about the resources at UCR, from the centers to the scholarships they can apply for,” she explained.

During winter quarter, PODER holds their Immigrant Awareness Week, which transpires during February. Last Tuesday, Feb. 18, they held their “History of the Undocu Movement in the IE” panel, discussing how immigration laws have changed in the U.S. On Thursday, Feb. 20, the “Undocu Womxn Resilience” panel showcased three woman navigating life and college as undocumented.

In the spring PODER will hold its annual banquet fundraiser, where the money will be used for scholarships; last year’s goal of $10,000 was exceeded by about $2,000, which Gonzalez attributes to “our president at the time, Wendy (Guzman), who I believe put a lot of hard work into the event, alongside our other board members.” She also mentioned the outreach beyond the campus at the time to local politicians, professors and parents.

Moving forward, USP and PODER hope to raise more funds to assist UCR’s undocumented community, which is now more attainable thanks to last year’s voting season. “For USP and PODER, there’s the Highlander Referendum that passed last year; the last time it was passed USP wasn’t included in the Referendum because it was fairly new, but now that’s no longer a problem,” Gonzalez noted.

Gonzalez ended the conversation on how she wants undocumented students to feel when they get involved with USP and PODER: “I want them to feel welcome. This (campus) is a safe space for us; this is where I found my community, and I want any new members to feel the same, to feel that the people in this place are like their second family.”
PODER meets every Tuesday from 5 to 6 p.m. at HUB 260. More information on their resources, alongside USP’s, can be found at usp.ucr.edu.