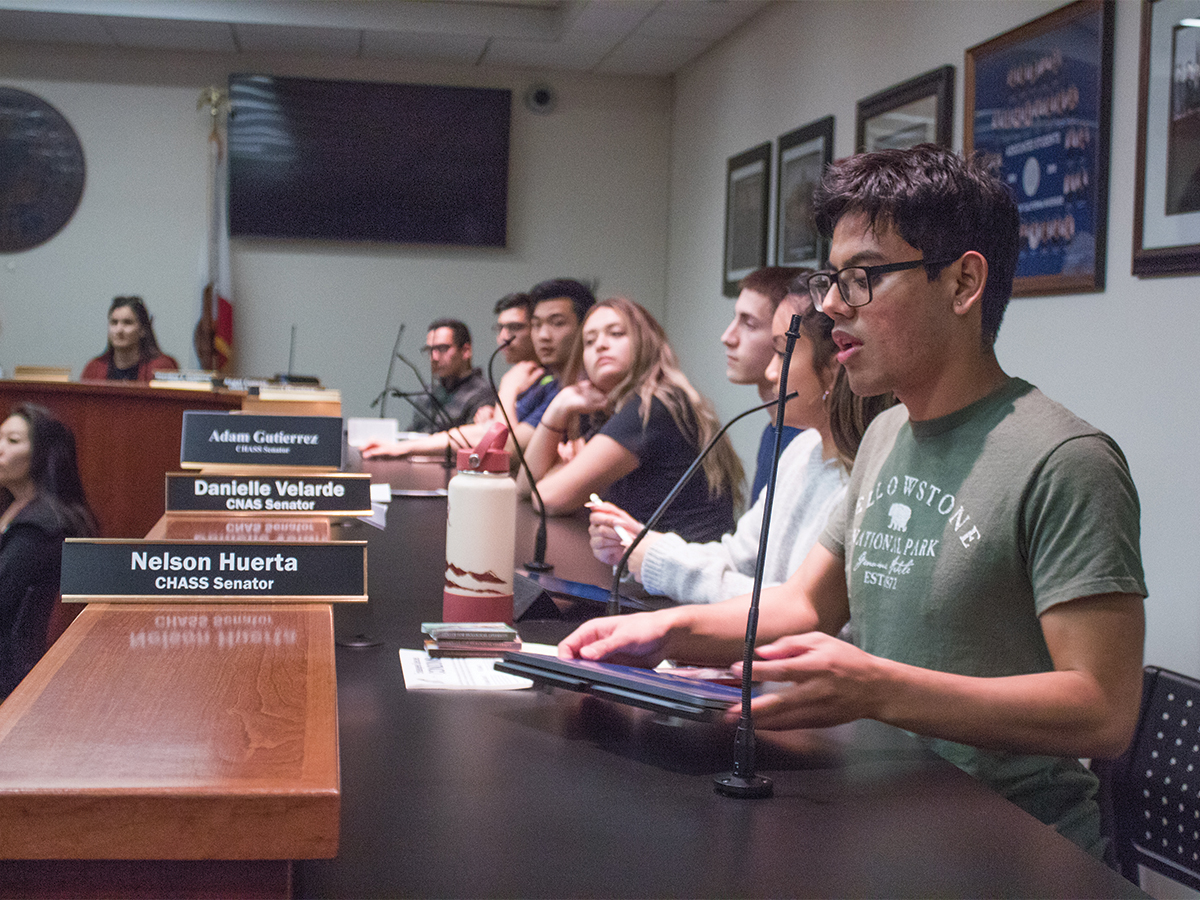 On Wednesday, Feb. 26, ASUCR held their eighth senate meeting of the quarter.

During Public Forum, Amanda Riggle, a second-year English doctoral candidate, spoke in support of SR-W20-004 Solidarity for COLA and UC Graduate Students Act which would be presented during Committee Reports under LRC. The cost-of-living adjustment (COLA) movement is demanding an increase in salary in order to afford housing. The movement, which began at UC Santa Cruz gained traction at UCR last week, with a large-scale rally being held in support of the UC Santa Cruz (UCSC) wildcat strike. A sit-in protest was also held on Feb. 27 in Hinderaker Hall.

Ben Harder, a lecturer for the University Writing Program at UCR, also spoke during Public Forum in support of SR-W20-005 Solidarity with UC-AFT; it would also be presented during Committee Reports under the Legislative Review Committee (LRC). UC-AFT is a union representing librarians and non-senate faculty working throughout the UC system. Their members hold academic appointments as lecturers, program coordinators, supervisors of teacher education and librarians.

On Feb. 1, UC-AFT released a statement regarding their contract negotiations with the UC. The statement stated that after more than nine months of negotiations, on the day before their contract expired, UC administration gave them an “incomplete, take-it-or-leave-it, bundle of articles with little to no movement.” UC-AFT is demanding that the UC end all unpaid work, assign available classes to current faculty before hiring new faculty, as well as the implementation of longer term pre-continuing appointments, more full-time teaching jobs, middle-class salaries and fair workload standards.

Harder stated, “I have been working full time here at UCR for 21 years … I have an $83,000 salary … Many of you want to start out of college with my salary and I am still here after 21 years. Our contracts are self-terminating. If they don’t tell us that we are rehired, we just have to assume that we were fired. We are trying to push for more job security and a salary that will allow someone to buy a house after 10 years.”

After their statements, both resolutions were presented during Committee Reports under the LRC. SR-W20-004 Solidarity for COLA and UC Graduate Students Act was presented first. Orlando Cabalo, a first-year senate intern presented the resolution. This resolution would call on ASUCR to stand in solidarity with graduate students fighting for COLA. Vice President of External Affairs Luis Huerta voiced his support for the resolution stating, “Although UCR is one of the last to catch wind of the movement, the march last week is a testament to UCR’s support for the movement. The COLA movement is just making sure grad students across the UC have a livable and sustainable wage which is why my name is on this resolution.”

SR-W20-005 Solidarity with UC-AFT was then presented. This resolution would call on ASUCR to stand in solidarity with UC-AFT and their contract negotiations. Cabalo also presented this bill and stated, “Lecturers make a median salary of $19,000 which is below the poverty line. It is immoral for universities with so much money to pay lecturers this.” The resolution was passed 10-0-2.

President Pro Tempore Miguel Ramirez then presented SB-W20-010 Amendments to Ch. 8: Stipends and Regulations. This bill would revise Chapter 8 of the ASUCR bylaws and make it so that any proposed changes for stipends for elected officials would apply to the following year’s elected officials. He stated that this bill was written in the essence of the 27th Amendment of the United States Constitution. Ramirez stated that this bill will help with transparency and will ensure that elected officials are working for students and not to benefit themselves.

Executive Vice President (EVP) Abigail Cortes, voiced her concern with the bill. At the Feb. 5 ASUCR meeting, SB-W20-009 Amendments to Chapters 10, 8, 2 & 4 of the ASUCR Bylaws, which would propose a stipend increase for the ASUCR EVP, was denied by the senate with a vote of 7-4-4. Cortes stated in regards to SB-W20-010, “I don’t think we should be punishing elected officials for knowing their worth. The way this is written basically selects which students are allowed to receive a stipend increase the year that they are asking for it and which students are not.”

She went on to state that this bill could indirectly punish students who may want to push for fair pay. She stated, “I don’t think it is correct for us to pick and choose which students deserve to receive pay and which students do not. We’re here talking about the cost-of-living adjustment but then also here limiting students from receiving pay that they think is fair.” Cortes stated that adding these amendments into Chapter 8 is not beneficial in any way. “For these reasons, I really encourage you all to indefinitely table this piece of legislation,” stated Cortes.

Elections Director Dyanna Castaneda voiced her support for Cortes. She stated, “It doesn’t make sense for us to be advocating for UC labor laws and then restricting our own government body. It is just asking for a pay raise … it’s realizing that you are doing all this work and not getting paid enough.”

Luna Sebastian, the personnel director, who is a secondary author on the bill stated, “I have four committee members who do tremendous amounts of work and don’t get paid at all … we receive stipends of thousands of dollars while others only receive hundreds.”

The bill ultimately passed with a vote of 8-0-4.

SB-W20-011 The Veto Transparency Act was also presented and passed. This bill would require that if the executive cabinet veto a bill, they practice transparency ensuring that the president works with the body that authored the bill to explain why a veto took place, inform the public within 48 hours that a veto occurred, inform the public of the vote count of the veto and require that the president explain why the veto took place at the next senate meeting. The bill passed 10-1-1.

Sebastian presented SB-W20-012 Ch. 6: The Office of Personnel. This bill would recognize and acknowledge the work that chairs of the personnel committee put in, as well as provide a better structure for all committees and their responsibilities. The bill would also require that the executive cabinet submit reports on the work they have completed. The bill passed 12-0-0.