Highlander
Home Radar Wheels Up at the Riverside Art Museum 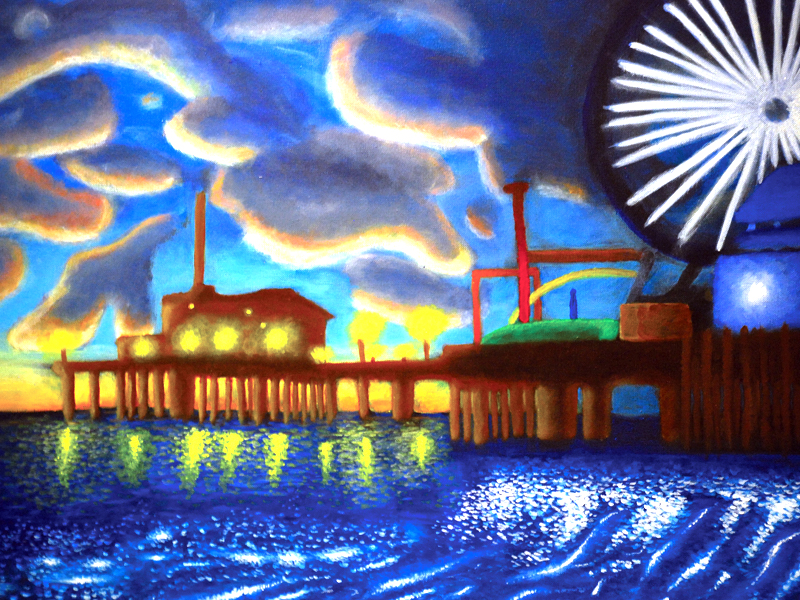 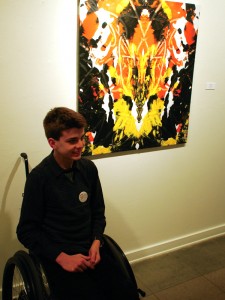 At face value, wheels are simply circular tubes of rubber that help transport us from one point to another. But for the artists at Riverside Art Museum’s latest exhibit, wheels embody an alternative method of personal expression. On Thursday, Jan. 3, the museum opened its doors for a demonstration and reception for “Wheels Up: The Wheelchair as an Artistic Vehicle.”

The exhibit showcases selected works by five talented individuals who each possess a unique story. Despite their disabilities, the artists—Tom Doyle, Martin Vogel, Tom Tostado, Nikita Wang and Jhovana Cecena—illustrate their emotions, inspirations and subjects on canvas, using acrylic paint and alternative tools as a medium. In “Wheels Up,” the aforementioned tools are wheelchairs, and the end result is fascinating.

As I stood in the Riverside Art Museum’s atrium, facing the three canvases on display, I was overcome by a sense of juxtaposition. The atrium is a curious bit of interior design; its faux stone flooring and upper-level balconies are designed to emulate the exterior of a Venetian building, but the setting is firmly planted on the inside of the museum. Similarly, the triptych of canvases presented as part of the demonstration for “Wheels Up” seemed paradoxical. The paintings, created by Martin Vogel, exhibited a curious cacophony of curves presented in the form of swirling, psychedelic shapes that combined to form an abstract presentation of movement. One of the side effects of using wheels as brushes is that the curves follow perfect lines, which made the paintings seem almost mathematical and computer-generated—and yet, they had been painted by a man dipping his wheels in paint and rolling over the canvas with calculated movements. By doing so, Vogel captures the dynamics of action in a uniquely captivating way.

The upper level of the museum housed more paintings by Vogel, as well as works by the other artists of “Wheels Up.” I found one of Vogel’s pieces (“Diablo”) to be breathtakingly arresting. Vogel’s wheels create a tableau of arcs that merge to fashion an abstract shape reminiscent of an eye against a muted, deep background. The overall effect is a sensation of racing while standing still, and the painting’s varied hues of purple, magenta and red evoke a sense of enclosure within its quiet, powerful atmosphere. It was surreal to stare at the painting and feel as though it were staring right back at me.

During the reception I chatted with teen artist Tom Doyle and his mother Kathleen, who is a special education teacher in Alhambra, California. Tom indicated that he does not draw from any specific inspirations or influences, and Kathleen explained that her son’s paintings do not involve any prior planning. “We just lay out the colors in front of him,” she said. Tom uses the front wheels of his chair to manipulate the colors on canvas, and he uses a paint stirrer to produce splatter effects and fill in empty spaces. The outcome is something that Tom discovers alongside his audience, which leaves the piece open to interpretation.

One of Tom’s larger paintings (“Untitled”) possessed such emotion and contrast that it drew an impressive crowd. The composition depicts just 4 major colors: black, white, orange and yellow, but is presented with the symmetry and abstraction of a Rorschach inkblot test. I interpreted the diverse splatters throughout the painting as a stylized expression of anger, but members of the audience suggested “power,” passion” and “tiger stripes.”

As I navigated the reception’s sea of well-dressed attendees, I was struck by the outpouring of patronage present among the museum’s donors as well as members of the Riverside community. The Academy of Special Dreams and the Inland Empire Health Plan (IEHP) were credited with providing generous support for the exhibition. At least 30 guests discussed the exhibit with museum staff and IEHP members, and directed questions to Vogel and Doyle as they lingered around the atrium and reception hall. A video presentation was screened to showcase artists not present at the event. 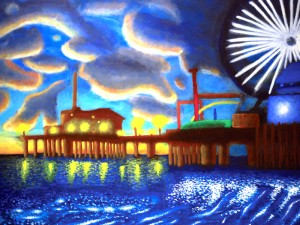 The support shown at RAM was inspiring, especially given the significance of the exhibition to its artists. Todd Tostado, an artist who lost the ability to use his arms and hands due to spinal muscular atrophy (SMA), stated in a video presentation that his art is important because “it is one of the few things [he] can do by [himself].” Tostado uses design software to create digital prints, such as “Friendly Faces,” a bold, distorted arrangement of smiling faces deconstructed into a swirling tornado.

Vogel’s website testifies that “limitation in any form is an unknown concept to Vogel,” but I feel that this statement can extend to all of the artists featured at the “Wheels Up” exhibit. Nothing is stagnant on the upper floors of the Riverside Art Museum; each artist’s distinctive style portrays expressions ranging from anger to repose. These artists purely represent the curious contradiction of being faced with seemingly insurmountable obstacles and overcoming them despite the odds. It is success against failure, expression against physical restraint.