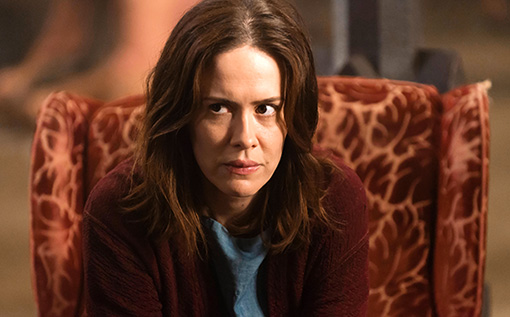 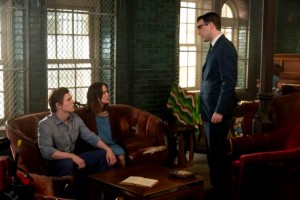 Things have been bumpy in the last few episodes of “American Horror Story: Asylum.” Between the arrival of an Angel of Death, a serial killer Santa Claus and the untimely demise of some of the most pivotal characters, the series has really stepped up its game in terms of character and plot development.

Frances Conroy returns to the show in “Dark Cousin,” this time as Shachath (an ancient Hebrew word meaning “decay” or “to corrupt”), the Angel of Death. She appears to those who call for her and offers them the choice between life and death; should someone choose the latter, she seals their fate with a kiss. Her presence perturbs the devil inside Sister Mary Eunice, and the two supernatural entities face off in one of the most gripping scenes on the show. Meanwhile Lana has escaped Dr. Thredson’s lair only to land in the car of a suicidal misogynist who crashes the vehicle; she is injured and eventually taken back to Briarcliff. It was particularly frustrating to watch Lana lose nerve during the perfect opportunity to end Thredson’s life. At this point, her misfortune seems almost comical, and it’s difficult to pity her when it’s clear the writers get a kick out of constructing the most absurd mishaps around her character.

“Unholy Night” was a far less satisfying episode. Ian McShane does a phenomenal job of portraying the deranged serial killer, Leigh Emerson, who hates anything related to Christmas and Santa Claus. However, his story felt unnecessary in light of the preexisting abundance of storylines floating around, and it’s a shame to bring in such a fascinating character so late in the season and for only two episodes. Shachath and the alien mystery are put on the back burner as Emerson takes center stage, eventually falling in with Arden and Sister Mary Eunice as a pawn in the possessed nun’s scheme to rid herself of the thorn in her side—Sister Jude. The attempt on Jude’s life proves unsuccessful, but the former nun is rendered powerless and unable to stand in the way of her enemies.

Stakes have risen for everyone in the aftermath of a critical shift in power dynamics within the asylum, turning up the heat in “The Coat Hanger.” The change of pace was a much needed reprieve from the increasingly formulaic nature of the second season. Lana learns that she is pregnant with Thredson’s child—a boy, according to Mary Eunice—and fails to abort the fetus. First season veteran Dylan McDermott is reintroduced as Johnny Morgan, a disturbed man who reveals his true parentage to a therapist. Morgan’s quietly menacing demeanor is a clear nod to Oliver Thredson, and it would seem that Bloody Face’s legacy continues on in present day. Despite the refreshing revelations, it felt as though the writers were overly preoccupied with focusing on every single character, from Jude’s fall from grace to Arden’s discovery of the aliens. Kit had become a stick in the mud in recent episodes, but he heroically saves Lana and formulates a plan to force a confession from Thredson.

“The Name Game” borrows its title from the popular 1964 rhyming game (Shirley Ellis), and is perhaps the most startling as well as the best episode of the season thus far. Tables are turned and death knocks on the doors of central characters. To keep it simple, Monsignor Howard finally makes himself useful by casting out the devil from Mary Eunice—but not before the possessed nun takes his virtue by demonic force; the tryst is witnessed by Arden. In spite of his despicable character, the Nazi doctor’s death is strangely fitting and even poetic, as he immolates himself with Mary Eunice, the one person in life who mattered to him. Jude (now Judy Martin) is as good as dead in her near-vegetative state, but she reaches out to the Mother Superior Claudia, asking her to liberate Lana. Thredson gains the upper hand over Kit when he discovers that Grace (yes, the dead girl who was abducted by aliens) has returned. As the situation spirals out of control, Monsignor Howard emerges as a potential new threat as he loses himself further to his dreams of becoming Pope.

Lily Rabe has been sensational this season, often stealing the spotlight from Jessica Lange with just the right amount of sass and femme fatale attitude; the thin veil of innocence over the monstrosity within makes her character all the more captivating. Judy’s imagined musical number in the common room, however, is a bizarre yet ingenious way for writers to convey her descent into madness. It was disappointing for the Monsignor to exist as a background character, a waste of Joseph Fiennes’s talent, earlier in the season, but it’s becoming apparent that this episode is a turning point for “Asylum.” The series is ready to shake things up, as they focus on new storylines that may diverge from what viewers may have originally predicted.