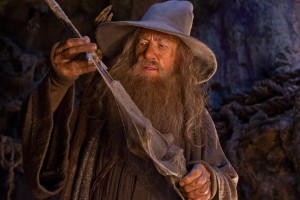 Director Peter Jackson (“The Lord of the Rings” trilogy) has brought us yet another epic with J. R. R. Tolkien’s “The Hobbit: An Unexpected Journey.” Set 60 years before the events of “The Lord of the Rings,” it follows the story of Bilbo Baggins (Martin Freeman), Gandalf the Grey (Ian McKellen) and 13 dwarves led by Thorin Oakenshield (Richard Armitage) as they reclaim the once great dwarf kingdom of Erebor from the dragon Smaug (Benedict Cumberbatch). Composer Howard Shore returns to helm the score, and the breathtaking and nostalgic music enhances the film experience tenfold as the new company travels across Middle Earth for their quest.

The lead cast is impeccable, with British actor Richard Armitage (“Captain America: The First Avenger”) capturing the grimly determined countenance of Thorin Oakenshield perfectly. Armitage has made a name for himself playing solemn, brooding characters in both film and television. Martin Freeman (“Shaun of the Dead”) is spot-on as Bilbo, a hobbit who reluctantly joins the dwarves on their quest after some heavy-handed persuasion by Gandalf. Ian McKellen’s iconic performance as the beloved wizard makes the movie worth watching. Gandalf has always been a pivotal character for the series, but in this movie audiences realize the extent of his sagacity in comparison to Saruman (Christopher Lee) and even the elf-lord Elrond (Hugo Weaving). His prediction about the threat Smaug poses is what initiates Bilbo’s departure from Bag End.

The screenplay, written by veterans Fran Walsh, Phillipa Boyens, Guillermo del Toro and Jackson himself, suffers no shortage of humor, including a particularly playful scene that involves three trolls arguing over how to cook the dwarves. Sadly, not all dwarves get their fair share of screentime, but a notable few include Kili (Aiden Turner), Fili (Dean O’Gorman), Balin (Ken Stott) and Gloin (Peter Hambleton), father of Gimli, the only dwarf member in the Fellowship of the Ring. Andy Serkis reprises his role as the vicious and schizophrenic Gollum, and does a remarkable job of emoting the emaciated creature. One of the best moments in the film entails a game of cat-and-mouse riddle between Bilbo and Gollum; if the hobbit loses, Gollum promises to bash his head in and eat him whole. The underlying danger in the otherwise comic turn leads to some of Freeman’s finest acting.

One commendable aspect of “The Hobbit” is its attention to detail. The dwarves’ motives are clearly and logically established, and Thorin’s backstory rationalizes his obstinacy and prejudice against the elves. Jackson’s incorporation of elements from Tolkien’s other novels and archives was a nice touch, transforming what would have been a straightforward, lighthearted children’s tale into a more complex, adult-themed work. This move suits del Toro and Jackson just fine, as both are accustomed to making big-scale movies with sweeping cinematography and dark, multi-layered storylines.

From the homely Shire to dreamy Rivendell and the rickety bridges of the vast Goblin hole, the varied changes in scenery are a welcome refreshment in the almost 3 hour-long movie, and serve to emphasize the shifting attitudes of the group. It’s satisfying to be able to feel the character growth and building camaraderie as the company of 14 finally begin to come to together in a solid and trusting alliance.

“An Unexpected Journey” lives up to its name as the first installment in the latest trilogy, with plenty of pleasant surprises in store for audiences. Despite its differences from the original novel (e.g. Galadriel, who is not in the novel, appears in the movie), fans of Tolkien’s work may want to check out the adaptation at the very least for its outstanding performances and cinematography. Jackson has crafted a praiseworthy film that deserves a chance to shine in its own right.

Editor’s Note: Due to an editorial error in this article regarding the presence of Radagast the Brown in the film adaptation of “The Hobbit,” the line in question has been corrected.