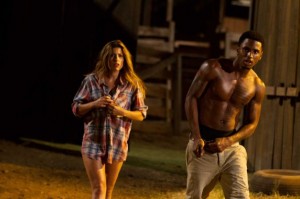 Let me make it simple for you and state now that the opening credits montage was without a doubt the best part of “Texas Chainsaw 3D.” This is largely due to the fact that the clips used in the montage were from the original “The Texas Chain Saw Massacre.” The hour and half or so of asinine monkeyshines that ensue wiped nostalgia right off the 3D glasses and into the gutter of screenwriters Adam Marcus, Debra Sullivan and director John Luessenhop’s (“Takers”) collective imagination.

The reboot-sequel picks up where the original “Texas” left off in 1974, and we learn the fate of the Sawyer family. Short story shorter, a small mob of enraged townsmen shows up at the Sawyer residence, shoots the inhabitants to death and burns the house to the ground. As the men later pick through the rubble for bodies, Gavin Miller (David Born) discovers that Loretta Sawyer and her newborn are still alive; somehow unnoticed, he kicks the woman to death and proudly presents the baby to his wife (Sue Rock), saying, “I got it for you, Arlene,” with all the suaveness of a man who must have forgotten one too many anniversaries.

Skip forward 20 years to 2012. Now if you’re among the numbskulls who thought that 20 years after 1974 should be 1994, you must be feeling shamefaced right about now. I’m assuming that sometime after the writers decided they couldn’t bear to make this movie without Alexandra Daddario’s bare midriff they realized she probably can’t pass for a 38-year-old, which is, of course, why they decide to go ahead and bend the laws of time. Nevertheless, in present day, Heather Miller (Daddario), a.k.a. the living time anomaly, works as a butcher at a grocery store, far, far away from Texas, and her hobbies include making art with bones and interacting woodenly with her boyfriend Ryan (Trey Songz). Upon being notified that her grandmother Verna Sawyer has passed away, Heather learns that she is in fact adopted, and heads out Texas to check out the estate bequeathed to her in the will. Once they arrive at the manor, Verna’s attorney Farnsworth (Richard Riehle) shows up with a set of keys and a letter from Heather’s grandmother that she is repeatedly instructed to read, which is obviously why she doesn’t. And so the attractive cast of 20-something lambs for slaughter (Tania Raymonde, Keram Malicki-Sánchez, Shaun Sipos) enter the mansion unaware of Jedediah “Jed” Sawyer—fondly known as “Leatherface”—(Dan Yeager) who lurks in the basement with his chainsaw collection. 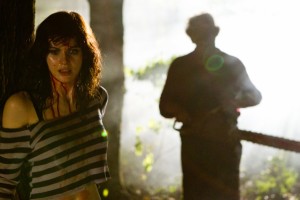 Daddario makes a valiant attempt at the role of last girl standing (or “final girl,” as coined by horror expert Carol Clover), though she seems to struggle with the “standing” bit; after her first encounter with Leatherface, in an impressive display of coordination, she trips down the front steps of the mansion and gets up only to trip again over the 2-foot-tall graveyard fence. She then proceeds to hide from her chainsaw-toting assailant in a wooden coffin. While it’s glaringly evident that the filmmakers aren’t mathematicians, they apparently aren’t aspiring logicians either. Supporting actress Tania Raymonde delivers an equally brilliant performance as Nikki, the best friend who once seduced Ryan behind Heather’s back. After the unfaithful pair locks themselves in the barn to escape Leatherface, guess who picks up a conveniently present shotgun, opens fire at the door and screams, “Welcome to Texas, motherfucker!” It’s true that Nikki had no way of knowing whether Leatherface is a native Texan, but forgetting that she herself just arrived in Texas less than 24 hours ago is a remarkable short-term memory trait usually found only in blue surgeonfish who go by the name of Dory.

When Heather finally makes it to the police station, the movie takes a break and splits off into a reading lesson/iPhone advertisement, as one unfortunate cop follows the red blood road into the mansion. Once he reaches the basement Officer Marvin (James MacDonald) realizes too late that he’s not in Kansas anymore, but soldiers on at the command of his superiors who observe his progress from miles away at the station thanks to FaceTime video call. If that’s not enough motivation to send every sheriff scrambling for the nearest Apple store, I don’t know what is.

Despite my prior comparison of the filmmaker’s creativity to a gutter, there is surprisingly no nudity in the movie. There is, however, one scene where Daddario’s shirt is completely undone for no apparent reason; the writers justify it as a key plot device, but why the shirt was unbuttoned in the first place is a mystery I’m not interested in solving, much like the entirety of “Texas Chainsaw 3D.” People get sawed in half, phalanges are amputated and blood overflows, but it’s pretty conventional fare as far as gory slasher flicks go. Audiences will be hard-pressed to find any of the subtle social commentary on the monstrous Other that made the original film legendary in American horror. Although the laughable dialogue and gaping holes (I don’t just mean the ones in Leatherface’s victims) in the story are a disgrace to the franchise, the worst move “Texas Chainsaw 3D” made was its attempt revamp Leatherface into a lonely giant who just misses his family and happens to also be a cannibalistic maniac. In one fell swoop the writers completely misconstrue the crux of Hooper’s villain.

In a nutshell, it’s as though Luessenhop gathered a mostly attractive cast and said, “Hey guys, let’s make an idiotic parody of “The Texas Chain Saw Massacre” that everyone will make fun of.” I did find this re-quel to be a nonstop laugh riot, but I can’t say it has much merit as a horror film. Audiences of “Texas Chainsaw 3D” will either laugh their keisters off or pray for the chainsaw flying at the screen to end their misery. Either way, there’s no sense in spending 15 bucks at the theater when you can find the same quality of work on YouTube.