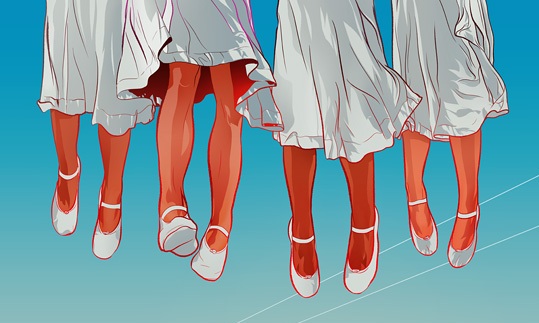 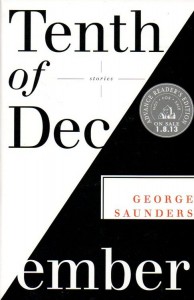 When I sat down to read “Tenth of December,” I knew nothing about author George Saunders beyond his lauded description as “the writer of our time” with an “original writing style.” I’ll see for myself what this tremor in the literary community is all about, I thought. I didn’t begin to expect that his latest short story collection would linger in my mind long after I had read its final page. Although “Tenth of December” is not literary perfection, it’s pretty close. Its darkly comic take on humanity and the morality of living is worth the read.

The book’s 272 pages are divided into ten short stories set in an America like ours, but slightly more menacing. Its opening story, “Victory Lap,” is about the attempted abduction of a suburban teenaged girl and the internal battle of a sheltered witness. The story’s perspective shifts from the girl—whose voice is so self-absorbed and characteristically youthful that I forgot her narrative was written by a 54-year-old man—to the witness as he watches the kidnapping occur, but the most unsettling moments of this story take place in the kidnapper’s mind. “Calm your heart, darling,” he says as part of his rehearsed you’ve-been-successfully-kidnapped spiel, “I know you’re scared because you don’t know me yet and didn’t expect this today, but give me a chance and you will see that we will fly high. See I am putting the knife right over there and I don’t expect I’ll have to use it, right?”

Right, the reader must agree, fully aware that we are the suburban teenaged girl. Saunders is the kidnapper, catching us fully off guard by starting with a story with such emotional resonance that we are forced to put ourselves in his hands and trust him as a writer who knows what he is doing. And he does. Saunders proves his talent in one of my favorite stories of the collection, “Escape from Spiderhead,” which first introduces a dystopian sci-fi element into the collection’s universe.  In “Spiderhead,” criminals are test subjects who are used to report back on the effects of emotion- and personality-enhancing drugs. The reader follows the perspective of one of the criminals, Jeff, whose simple, passive narration readily defines him as a standalone character who helps us slowly realize the horror of the experiment’s agenda: to artificially create real emotions. Love is just a blend of chemicals injected into Jeff’s back via a surgically implanted MobiPak, and the desire to commit suicide can come as easily as an infusion of the intense depressant Darkenfloxx.

Despite the bleak situations each character confronts, one of the remarkable things about “Tenth of December” is its satirical blend of tongue-in-cheek and dark humor. “Spiderhead” may be terrifying, but the casual voice of Abnesti, the experimental program’s facilitator with a camp counselor vibe (“When a certain individual got athlete’s foot on his groin on a Sunday, did a certain other individual drive over to Rexall and pick up the cream, paying for it with his own personal money?”) and Jeff’s patient narration (“That was a nice thing he’d done, but it seemed kind of unprofessional to bring it up now.”) provide a welcome reprieve from the horrors these characters must face.

Saunders’s command of language is impressive to say the least. Almost every story maintains a clearly defined character narration distinct from the other stories, but related in terms of theme, humor and the overarching collection’s universe. His prose truly shines when he delves into experimental writing styles. “The Semplica Girl Diaries” is written in the fragmented, unfiltered style of the narrator’s personal journal. We learn that the narrator is a middle-class father living in an affluent neighborhood who is pressured to keep up with the Joneses for the sake of his family’s happiness. He writes, “There is so much I want to do and experience and give to kids. Time going by so quickly, kids growing up so fast. If not now, when? When will we give them largesse and sense of generosity?” In this story, “sense of generosity” culminates itself in the acquisition of a string of Semplica Girls, low-wage female workers who are strung up on thread as lawn decoration, which is considered way cooler and more affluent than owning lawn gnomes or something substantially less horrifying.

This is my only complaint: a couple of the stories (e.g. “Sticks” and “Al Roosten”) were beautiful, but felt too superficial and forgettable to hold their own in the collection. Nevertheless, “Tenth of December” starts strong and finishes with an intense rush of relief and a deep rumination on life, death and relationships with others. Is Saunders “the writer of our time?” I’m not sure, but I do know that he is unquestionably brilliant, and I look forward to revisiting “Tenth of December” many more times.