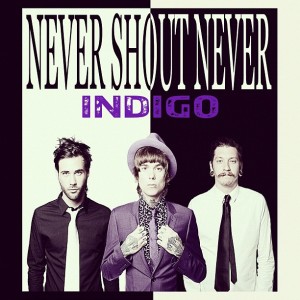 We are back to the ‘90s when it comes to just about everything in today’s pop culture: fashion, makeup and now, music. Never Shout Never’s 4th album “Indigo” seems to bring an abrupt end to the band’s indie days in exchange for a classic pop-rock sound reminiscent of Sonic Youth. The retroactive resonance accentuates the entire band this time around rather than merely the lead vocalist and his ukulele.

The first number, “Magic,” opens with a fusion of clever verses and rhythmic transitions that flow in and out of a chorus; it really jumpstarts the album as it follows songs about adventures of love, lust and relationships. The succeeding track, “All Mine,” promises needy, overdramatic teenagers a sing-along for their life story, particularly when lead singer Christofer Drew Ingle whines, “I won’t stop till I have you / I won’t be just fine / Till you’re mine.”

The following compositions bring out a lackadaisical sensation from amidst the upbeat thrumming and echoing back-up vocals, which alter the stanzas of teen drama into something slightly more than bearable. “Between Two Worlds” and “Lust” demonstrate the band’s love-themed lyrics that have been a convention running from previous EPs, but the experimentation with the individual musicality of the vocals, drums, guitar and bass harmonize to create a unique production of sound. The layering of various drumbeats from verse to chorus add dimension to lyrics that initially come off as shallow and repetitive. The band’s development from a man and his uke to an actual ensemble of musicians that utilizes each of its three members is a sign of growth.

Never Shout Never couldn’t have released a more well-executed change of pace for the beginning stages of their blossoming career. The band’s monotonous, romance-themed refrains are sure to charm the old fan base they have amassed over the past few years, and their new pop-rock melodies are sure to lure in an eager audience that is tired of synthetic, electronically-dubbed numbers. Unfortunately, the tediously recycled lyrics about love stories that succeeded in reeling in fans are the same lyrics that can break Never Shout Never. The lovesick subject matter is overrepresented to the point where individual tracks are only distinguishable by their titles, which are then repeated in each chorus.

“Indigo” in its entirety is a step forward for Never Shout Never as they test new sounds. The band’s songwriting still shows youth and naiveté, but they are drifting far enough in the right direction to earn a chance with a broader, open-minded audience.