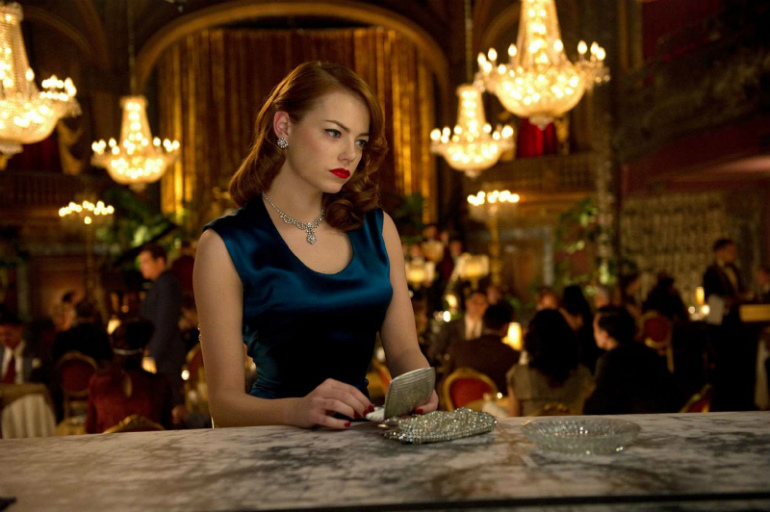 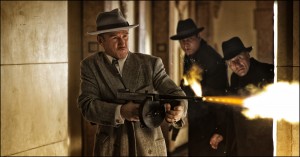 In the aftermath of the tragic shooting at a theater in Aurora, Colorado, Warner Bros. Pictures pulled “Gangster Squad” from a pre-Oscar release in September and shelved it; the then-controversial scene involving a theater shootout was cut and replaced in preparation for a low-profile release in January. Director Ruben Fleischer, after the breakout success of “Zombieland” in 2009, missed the mark with “30 Minutes or Less” (2011). He aspires to tackle the pulpy grit of a crime drama in this screenplay written by Will Beall, but he may find himself out of his depth in film noir waters.

It’s a stretch of galactic proportions to say that “Gangster Squad” is based on a true story, especially in light of the fact that Mickey Cohen was arrested and incarcerated twice by the IRS for tax evasion. But that’s not the story the masses want to see on the big screen, and so our story begins in post-WWII Los Angeles (1949), an era of vice and venality. True blue war veteran Sgt. John O’Mara (Josh Brolin) is far from pleased with the status quo, which is fortunate for LAPD Chief Bill Parker (Nick Nolte), who suspects that his best and brightest are making the beast with greenbacks in Cohen’s back pocket. Parker saddles O’Mara with the task of recruiting a discreet, off-the-books posse with the backbone and competence to demolish Cohen’s operation while leaving the man himself intact for seizure. O’Mara, thanks to his wife Connie’s shrewd discernment, enlists the seemingly insouciant Sgt. Jerry Wooters (Ryan Gosling) and a ragbag of detectives (Anthony Mackie, Robert Patrick, Michael Peña and Giovanni Ribisi) in a gleefully violent romp through a mob-infested Los Angeles. 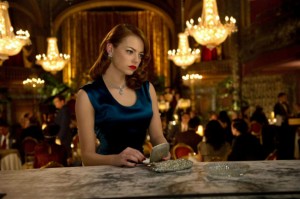 You may be wondering why I failed to mention Emma Stone’s character; that would be due to an utter lack of character when it comes to Cohen’s “etiquette tutor” Grace Faraday. Stone steps into this pseudo-noir landscape like a humanly-proportioned and anatomically correct Jessica Rabbit, but despite her best attempts to fill out the role Beall scraped together from erstwhile damsels-in-distress, the romantic subplot involving Faraday is hardly worth mentioning. The 24-year-old actress plays a presumably just as young would-be actress turned gangster moll, who catches the eye of—who else?—Gosling’s character Jerry Wooters, but she falls short of embodying a world-weary tart with a heart. Skeptical casting choices aside, Stone-Gosling shippers will enjoy this silver screen reunion in the B story.

Contrariwise, if you ship Brolin and Gosling in any way, shape or form, prepare yourself for discontentment. While each actor delivers as solid a performance as can be expected from the script, they suffer an empathic deficit, and any opportunities presented for establishing deeper solidarity between the pair are quickly swept away in sporadic bursts of gunfire and mob film vernacular. There is only a notch more of chemistry between Brolin and Penn, both of whom previously collaborated with tremendous affinity in the Academy Award-winning biopic “Milk” (2008), furthering the conclusion that the string of below par relationships featured in this film are the fault of the script and direction. In fact, the supporting leads in this movie are also denied any sort of substance to work with, which is a crying shame with such a first-rate ensemble. It makes you question as to why any of these big-ticket Hollywood names would sign on for a screenplay of unmistakable mediocrity.

The stakes are presented too highly and glimpses of good, old-fashioned “American” sentiment too deeply-rooted for “Gangster Squad” to be a genre parody, at least that much is certain. However, the comic blunders and earnest cracks at wit and lightheartedness put any effort at taking this story seriously into a chokehold. In short, it’s no “L.A. Confidential.” It’s clear that this movie is all about the flashy, modishly-choreographed brutality, and although that one-track fixation is its foremost flaw, it’s also the main reason general audiences will be able to sit through the 113 minutes without getting twitchy. If you’re capable of switching off the rational slice of your brain for that long, you’ll be able to slouch into a trance of whimsical bloodshed and pass the time with a few chuckles.

This picture doesn’t leave me with high hopes for Beall’s upcoming screenplay for the live-action “Justice League,” but I’m still holding out hope that Fleischer will prove not to be a one-hit wonder director. Audiences may find that this movie is a lot like a vintage postcard on display in a gift shop—pretty to look at, but easily discounted in favor of shinier wares. “Gangster Squad” is a spectacle, filtered through endless layers of hazy glamour and set to rollicking swing and jump blues numbers. In spite of its shortcomings this movie is more than likely to entice the profusion of moviegoers who seek just that: a spectacle, especially if the dozens of people lined up at the box office—who were kind enough to let me cut ahead in order to write this article in time—on opening night were any indication.