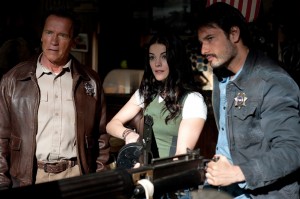 Arnold Schwarzenegger makes a smashing comeback to the silver screen in the action-packed thriller, “The Last Stand.” Like many of his earlier roles—take the futuristic “Terminator” film series for example—this B-feature can be summed up by its title. Audiences can expect lots of gunfire, revved engines and clichéd one-liners that are dropped in at the end of violent scenes.

After a harsh past in law enforcement, Sheriff Ray Owens (Schwarzenegger) takes care of Summerton Junction, a peaceful town by the U.S./Mexican border. The regularly low-crime rates take a hit when notorious drug cartel leader, Gabriel Cortez (Eduardo Noriega), makes an elaborate escape from an FBI transport en route to death row; he heads for Mexico at top speed with the aid of heavily armed gunmen and a stolen Chevrolet Corvette C6 ZR1. The situation escalates until the only point between freedom and recapture is the same town where Owens expects a quiet weekend. 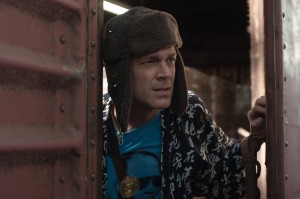 “The Last Stand” is a classic underdog story, complete with a cast of unlikely heroes, including Deputies Mike Figuerola (Luis Guzmán), Sarah Torrance (Jaimie Alexander) and Frank Martinez (Rodrigo Santoro), as well as the somewhat crazy yet convenient weapons distributor, Lewis Dinkum (Johnny Knoxville). In comparison to their motley group, Cortez seems almost over-prepared as his army of brutes clears a path for him to flee the U.S. The film keeps a swift pace, which is probably the result of every other scene cutting to the specially-outfitted Corvette as it zooms away, but it manages to fit in a complicated plot. Owens’ history as an officer in the narcotics division at the LAPD is briefly mentioned, which helps to balance the adventure-seeking temperaments of his younger subordinates. 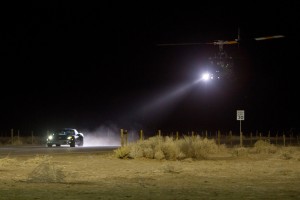 The movie features an assortment of action scenes with armored vehicles to ram through barricades and bazookas when a million bullets can’t do the job. While this does not create a lot of depth for the story, the graphic carnage is spectacular in its own right. Although the film pokes fun at the extremeness of his character’s predicament, Schwarzenegger proves to be capable of holding his own in man-to-man combat, even in his 60s.  The stunts and special effects, at least where the Chevy was concerned, are far from realistic but amazing to watch on a big screen, as the tricked-out vehicle zigzags through patrol barriers; getting Cortez from point A to point B remains interesting as the various obstacles in his path lead up to the final showdown at Summerton. 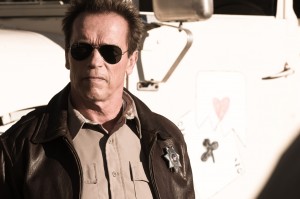 Overall, “The Last Stand” was entertaining enough, in spite of its predictable plot and inflated comedic relief. I was impressed by its array of high-contrast roles: the FBI agents who never seem to get anywhere fast enough, the merciless gang led by Cortez and the innocent townspeople who refuse to leave their breakfast even when their Sheriff comes to warn them of the impending peril. As a result, the film is not an embarrassment, and worked well within its generic plot and character polarity, but I don’t see any award nominations in its future. To its credit, “The Last Stand” succeeds in highlighting Schwarzenegger’s unforgettable stardom by placing him in a role only he can fill.