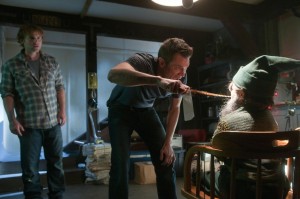 There isn’t much to say when it comes to the humorless, scatologically driven train wreck that is “Movie 43,” and that’s because there is absolutely nothing worth seeing. But for you, noble Highlanders and other folk, I will try my darnedest. This quasi-metafictional nightmare is hands down the best example of a squandered all-star ensemble, and the least entertaining movie I have seen in theaters. I would gladly sit through a marathon of every movie I have ever assigned a low rating (that’s right, even “Breaking Dawn Pt. 2”), if it meant I could unsee this 90 minute waste of $6 million. Unfortunately, that’s impossible. But what I can do is accept that there is a greater purpose behind every tragedy, which in this case is my newfound mission to warn you not to see this movie.

It’s clear that director and producer Peter Farrelly (“Dumb & Dumber,” “There’s Something About Mary”) wanted desperately for “Movie 43” to be “The Kentucky Fried Movie” of this millennium. Well, it’s not. “The Pitch” is the overarching storyline that cements a string of shorts together with all the adhesiveness of olive oil. Dennis Quaid plays Charlie Wessler, a stone broke screenwriter who threatens film executive Griffin Schraeder (Greg Kinnear) at gunpoint when his script is rejected on the basis of being plain awful. He then continues pitching the movie to his captive audience much to Schraeder’s (and my) consternation. There’s a reason “Movie 43” wasn’t press screened for critics; they would have clawed at the theater doors to get out.

You will never believe how many top actors signed on for this movie, and—should you choose to watch it (but really, don’t do it)—once it’s over, you still won’t be able to believe it. Oscar winners Kate Winslet and Halle Berry, in addition to Oscar nominees Hugh Jackman and Naomi Watts, as well as the talented Seth MacFarlane, Chris Pratt, Kate Bosworth and Richard Gere are just a handful of the victims who were roped into this ill-conceived vision of bodily wastes and racial slurs. Such a mammoth imbalance between the spectacular cast and a screenplay that deserves all the Razzies can only mean that the actors had to have been drugged, blackmailed or bewitched (my money’s on witchcraft) into starring in this big, fat black mark on their filmographies. 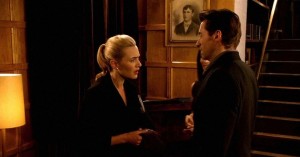 The moment I (and a horrified Kate Winslet) laid eyes on Hugh Jackman’s throat testicles (you read correctly), I found myself wondering if this could be the movie that finally jumps the shark on the Australian Adonis’s sterling career. But in light of the fact that this embarrassment was shot 4 years ago (before he even began filming for “Real Steel” and “Les Misérables”), I wouldn’t say it’s all downhill for the man. If it’s of any consolation, Hugh, I’m sure your scrotal Adam’s apple and Marion Cotillard’s Forehead Tittaes would make quite the pair. No, you’re right; it’s too soon for jokes. I’m terribly sorry, as I’m certain you are, too.

I give no quarter, however, to Farrelly or the crew of directors and writers he assembled for the making of “Movie 43.” Together they venture into all-time lows in the underbelly of gross-out humor. The truly revolting part of this movie isn’t even the explosive flatulence (among other things) or pubic hair in soup. It’s the part where they jump down the gutter into taboo territory for no reason other than the contemptible hope that people will laugh at it. The worst part is that their hopes will be rewarded, because a regrettably sizable demographic will delight in gags involving incestuous acts as well as animal and child abuse.

The writers also relish putting down women in ways that range from not-so-subtle to in-your-face. I was surprised to discover that Elizabeth Banks (“Pitch Perfect,” “The Hunger Games”) directed “Middleschool Date,” a short, starring Chloë Grace Moretz and Christopher Mintz-Plasse, which revolves around poking fun at a girl getting her period for the first time. Because periods are gross and funny, right? Ha! Ha! I was far less surprised by the time I got to “Beezel,” a short that plays in between the closing credits, in which Banks stars alongside Josh Duhamel and an animated cat.

The crowning glory in offensive scenes comes from a couple of sketches that feature the “iBabe,” a music player that looks just like a naked woman. When the team responsible for creating the first iBabe wheels in a naked African-American woman during a meeting, the Boss (Richard Gere) is elated that colored iBabes will soon be on the market. Yeah. That happened. 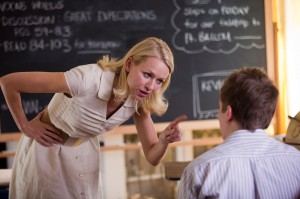 But you know what? Maybe the writers did have a more profound reason behind the offensive material. Maybe if you dig really deep you’ll find that “Movie 43” is a gross-out version of Rick Alverson’s “The Comedy,” an utterly tedious and mind-numbing experience with a message it its core. Maybe, just maybe, each short is meant to depict the vile, exploitative nature of today’s film industry. Oh wait, this is Peter Farrelly we’re talking about. Even if this was the case, and “43” was made with satirical ambition, the audience won’t get the point. They will laugh at the girl experiencing the horrors of puberty and the suburban teen who is seduced by his own mother, because Hollywood has conditioned them into believing that this is quality humor.

I’ll close with this: when I finally gave in and decided to set aside good taste and morals, and shut off the unit of my brain that stores memories of good comedy and cinema…I still didn’t laugh.