Although Joe Biden’s win was a positive turn of events given the last four catastrophic years, the fight for a better America is not over. Given Joe Biden’s cabinet candidates, the country will likely see a shift back to Obama-era politics instead of moving forward toward more progressive changes. Although there may be some promise, it is still mostly up to U.S. citizens to demand more change from these civil servants. The country will stay in a stalemate if its people refuse to take action and hold the Biden cabinet accountable.

Joe Biden’s election as the president of the United States cannot be seen as a complete victory if the U.S. expects progressive changes. However, a return to Obama policy seems inevitable considering many of the cabinet candidates served under that administration. Despite their experience, this should not be seen as a completely positive thing because not enough was accomplished during the Obama administration.

Moreover, it should not be forgotten that President Obama deported more immigrants than any other sitting president. This is very concerning since Joe Biden recently named Alejandro Mayorkas as the Secretary of Homeland Security, who previously worked under the Obama administration as director of U.S. Citizen and Immigration Services and assisted in those deportations. This is very worrisome, especially for those who are expecting progressive reforms to immigration policies.

Additionally, most of the people that Biden nominated, aside from Bernie Sanders, have been too centrist. Without anyone willing to push the envelope and take charge in regards to progressive policies, it is likely that there will be little to no groundbreaking change. Perhaps the only promising outcome from candidates is the prioritization of climate change by implementing the Special Envoy for Climate. This is a small step forward in getting back to normal and getting the U.S. back on track with the Paris Climate Accords. Other than damage control, however, it is hard to see the Biden administration taking any more strides towards more progressive legislation and policy.

It is expected that the Biden administration may consist mostly of compromise and cleanup instead of stepping on anyone’s toes with aggressive change. While it is beneficial to have Biden as president in order to heal the nation from the scathing Trump administration, there is so much work that needs to be done outside of fixing what the last administration broke. Without a reasonable push from the people, Biden and his cabinet may not be so eager to implement much needed progressive change, especially in the first 100 days.

Nothing will get accomplished if people stay silent. Complacency has never had a place in politics and people need to be educated on how their involvement impacts the decisions made by public officials. Perhaps the most important thing that citizens need to be reminded of is the effectiveness of voting not just in the primaries, but also at the local and state level. For instance, Georgia is going to be a very key runoff election, and it could very well determine the chances for Joe Biden and his cabinet to have any progressive momentum. Otherwise, with a majority red senate, it will be difficult for the Biden administration to get anything passed, and only so much can be done with executive orders. It is imperative that people send letters and contact voters in order to influence the outcome of that special election. Without adequate involvement such as this, four years from now, we may find ourselves in a similar situation with another president much like Donald Trump and any progressive change made will be all for nothing.

Being politically active is not limited to posting on Instagram stories. Citizens need to reach out to representatives, help with campaigns and make sure everyone’s voices are uplifted. For instance, this summer, the nation had a huge racial reckoning with the Black Lives Matter movement, and we need to keep this energy up when it comes to demanding quality leadership from Biden and his cabinet. Additionally, citizens need to take it upon themselves to pay attention to proposition elections in order to ensure that more progressive legislation is passed. If everyone stopped paying attention after the primary elections, then the chances of real change occurring in the country are little to none.

Although it is clear that progressive change may not happen all at once during the Biden administration, that should still not be a reason for the public to give up. There is a lot of work that needs to be done in addition to cleaning up after the Trump administration. Without Biden and his cabinet having any sort of accountability for themselves, much about the nation will not improve. Nevertheless, it is up to the citizens of America to make their voices heard and push for effective policy change. 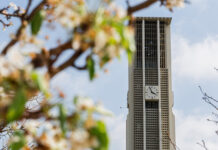 Unaffiliated organizations shouldn’t get to run rampant in campus life