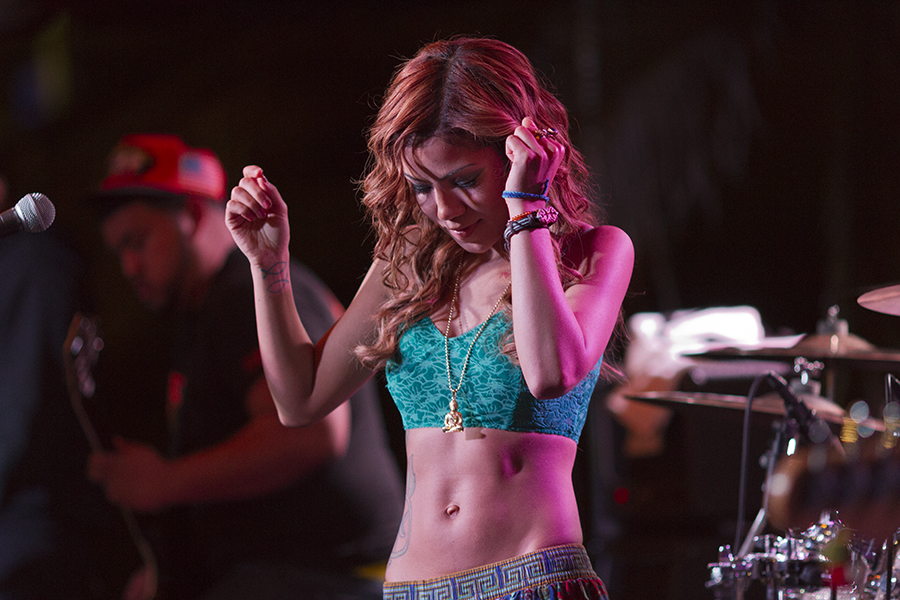 The HUB’s outdoor dining area was transformed into a romantic and soulful platform for artists BJ the Chicago Kid, Jhene Aiko and Bobby Valentino on the night of Feb. 21.

Jittery audience members were all bundled up in the frigid evening air, chatting and exuberating a sense of pride and excitement. The scene was reminiscent of a high school football game’s tailgate. The ladies were dressed to impress and the gentlemen were decked out in their fancy jackets and beanies.

There was something very organic about the whole picture: the HUB was filled with hundreds of people standing in the darkness, yet it still retained the same familiar qualities of a space where UCR students eat, relax and congregate in the daytime. The beautiful setup consisted of a simple stage adorned with Christmas lights and colorful fabric as a roof for the artists and their bands. The dining tables were left in their usual places and a small stage was set up in the open space. Ensuring that the artists would be at a very friendly, up close and personal level, the platform stood just a few feet up from the ground.

ASPB’s annual Winter SOULstice opened with BJ the Chicago Kid, who sang a diverse medley of feel-good covers that fell together fluently. With songs like “All Falls Down” by Kanye West, “Electric Feel” by MGMT and “Let’s Get it On” by Al Green intertwined with his own original track. He eased the crowd into a night of smooth music, chill vibes and the soul of R&B music at its finest.

As the night progressed, the outside of the HUB became more crowded. People began standing on the dining tables to get a better view. Some were clambering on the second and third levels of the HUB, clinging to the railings and looking down. There were even people squeezing together, balancing on the stairs leading from the HUB outdoor dining area up to the Coffee Bean. A few sat on the lawn behind the stage, watching performers even if from the back.

During intermission, the mellow mood was continued with songs like “Pretty Wings” by Maxwell and “Closer to my Dreams” by Goapele oozing from the speakers. ASPB got interactive with the crowd by asking some trivia questions about UCR and throwing out T-shirts.

All three artists sang their introductions as well as their goodbyes. For example, BJ the Chicago Kid departed with a “Thank you for your tiiiiime” in funny freestyle falsetto. As his band kept playing, he sang whatever came to mind, exhibiting a confidence and flexibility that was consistent with the upcoming artists.

Next up was Jhene Aiko who jumped on stage in a tight blue crop top, showing off a tattooed ribcage and toned stomach. Commenting on the coldness, she said, “That’s just how thugs do… so I guess you’re all thugs”.

With her mesmerizing and feminine voice, soothing and clear like water and effortlessly sexy, Aiko’s songs sound exactly the same live as they do recorded. The audience ate up her talent for starting off strong and letting her voice trickle into a soft decrescendo, hitting a diverse range of notes on the way down.

As an introduction to her first song, she asked the crowd, “You guys… aren’t allowed to smoke weed on campus… right?” After the audience’s laughter and cheering subsided, she continued, “Well, if you do like to get high, off of love, off of weed… we’re gonna get a little bit higher,” and transitioned into her hit track, “Higher.” When the instrumental of her second song “Space Jam” trickled in through the speakers, the crowd was already screaming.

The lyrics, tone and sound of her music convey an artist who is slightly cynical, rough around the edges, honest and raw. “I’m ready to rock right now. I’m a little angry,” she admitted to the audience.

Aiko also covered 2pac’s “Keep ya Head Up” which really spoke to the audience, especially during lyrics like “Got our name from a woman and our game from a woman, I wonder why we take from our women, why we rape our women, do we hate our women?” The audience was asked to “put one finger in the air, one love” to which everyone willingly complied. Eyes closed, hips began swaying and hands were joined as she fluidly combined 2pac’s with her own singing style.

Last but not least was Bobby Valentino. Before he arrived on stage, a montage of the instrumentals from his most famous songs blasted from the speakers, making the audience loud and rowdy with anticipation. By now the HUB outdoor dining area was completely packed with people, all the way from the tip of the stage backed up to the glass doors of the HUB. At 9 p.m., Valentino sported a studded blue denim jacket and dark sunglasses and made a shoutout to the ladies: “Nothing like a woman out here getting her degree.” He even comments on UCR by saying, “Great school… beautiful campus.”

Valentino played the piano, exhibiting phenomenal musicianship and paying tender attention to his craft. Singing with sincere focus, emotional expressions and eyes closed, he referred to his specialty as “old school R&B music.”

Couples huddled closer and hips swayed to the beat of his music. After asking the security to allow his fans to come closer, the crowd lunged forward, standing literally inches away from him, and he loved it. Then Bobby Valentino bent down and kissed a girl in the audience.

Jimmy Patel, a fourth year neuroscience major said that, ultimately, the night was “very seductive.” Deep Patel, a fourth-year music major added, “he had a couple of those little tongue moves in there” referring to Valentino’s laidback attitude, sense of humor and sex appeal in his performance.

For both Jimmy Patel and Deep Patel, the highlight of the night was definitely when Valentino sang his 2005 hit “Slow Down.” Overall, the evening was “fun but calming,” said Deep Patel.

“UCR is one of the best schools ever,” said Jimmy. “We got high standards,” added Deep. In reference to free concerts and other unifying events, Jimmy continued, “We’ve gotta have more of these…We’re coming out of our way to come here for this and that really says something.”