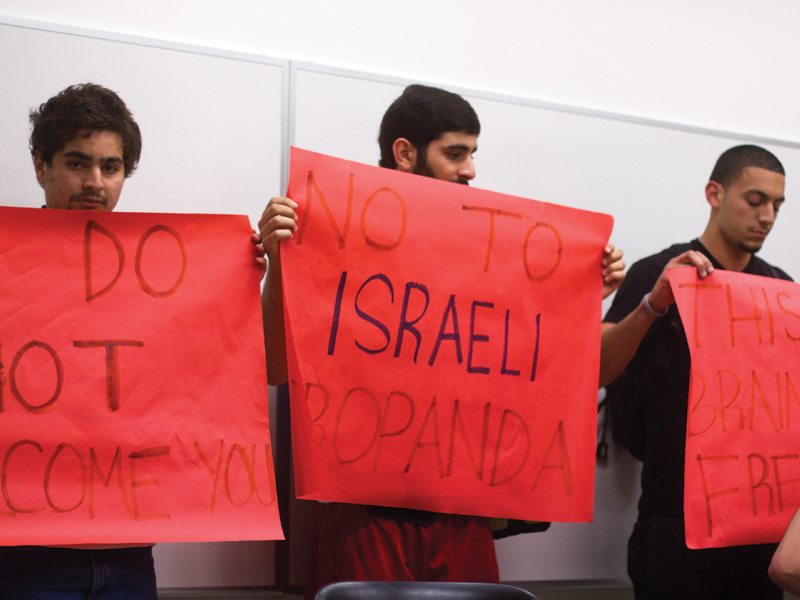 Members of Students for Justice in Palestine (SJP) staged a silent walkout during a question and answer session that featured two reserve Israeli soldiers on Feb. 27. A fierce debate ensued between the soldiers and a few of the SJP members that remained behind to question them. The topics of debate included terrorist attacks, anti-semitism and territorial occupation.

The event was co-sponsored by the on-campus pro-Israeli student organizations Highlanders for Israel (HIFI) and Hillel at UCR. The talk was part of an ongoing project called Israeli Soldiers’ Stories, designed to bring Israeli soldiers to college campuses and speak about their experiences. It was organized by StandWithUs, an international nonprofit dedicated to “informing the public about Israel and to combating the extremism and anti-Semitism that often distorts the issues.”

An event much like this one was held last year and erupted in heated shouts, during which both the student protesters and soldiers angrily argued with one another. Tensions continued to rise, and several days later, they culminated in someone defacing an Israeli flag by scrawling the word “terrorists” on it. Hillel and SJP both condemned the act.

With the outcome of last year’s events, and with the recent trial of the UC Irvine 11, some feared that this session would produce similar results.

“It’s a huge hot-button issue,” stated Daniel Leserman, one of the organizers of Israeli Soldiers’ Stories, prior to the session. “We are expecting some sort of protest or resistance. Hopefully it’ll just be something silent.”

Shadi Matar, President of SJP and ASUCR Academic Affairs Director, explained why SJP decided to stage this protest. “They’ve done this many times before and we want them to know that Israeli soldiers are not welcome on this campus on the moral grounds that these guys are human rights violators,” he said. “We consider them war criminals.”

The session started at 7 p.m. in the Interdisciplinary Building South and was occupied by roughly three dozen students. About half were members of the SJP and the other half were from HIFI.

The event began with the soldiers introducing themselves and discussing their work with the Israeli Defense Forces (IDF). The soldiers’ names were Adam and Kinneret; their last names were not disclosed due to security reasons. Adam told a story of a rescue mission in which the Israeli soldiers saved the life of a Palestinian child during a missile raid by the Hamas government in Gaza.

Before Adam was able to finish his story, an SJP member in the front row stood up and began the first of two walkouts. About a dozen students left the room while Adam and Kinneret attempted to persuade the protesters to stay and ask questions.

“Please stay, guys. We would love to hear your questions,” pleaded Kinneret as the protesters steadily filed out the door.

“The thing you are doing right now, it’s really—I feel sorry for you,” said Adam as the students walked out.

Kinneret asked some of the students what their intentions were and what they were hoping to accomplish with the walkouts. The protesters provided no response, and she accused them of polarizing the campus. The SJP members held protest signs that read “This is a brain-wash free zone.”

The second wave of walkouts started just three minutes after the first. Shadi Matar and Amal Ali were two of the few SJP students who decided to stay. The room was half empty by this point.

A back and forth discussion soon ensued between the soldiers and the two SJP members. One of the students asked the soldiers to explain why they felt that things were so polarized.

“I think there is a lot of racism, a lot of anti-semitism,” answered Kinneret.

The discussion then shifted to Operation Pillar of Defense, an eight-day battle in Nov. 2012 between the IDF and Hamas. Ali asked the soldiers to explain why the majority of deaths during the operation were of Palestinian civilians. Kinneret refuted that accusation and explained that most of the deaths were of Hamas terrorists, but admitted that there were civilian deaths during the operation.

Adam clarified that the purpose of the operation was to defend their territories from Hamas. From this, the conversation transitioned into a debate about territorial division between Israel and Palestine. The soldiers dominated most of this conversation.

“Palestine, they could have had the exact same country that Israel did,” said Kinneret. “How come you guys didn’t start nation-building? How come you launched this crazy war against Israel, trying to wipe it off the map?”

“And when you say, ‘Palestine will be free from the river to the sea,’ where is Israel in the whole story?” Adam followed.

Matar answered that he advocated for a one-state solution in the territory.

After this point, the conversation jumped from topic to topic with both sides providing different statistics and anecdotes in an attempt to support each of their arguments.

Despite the clear contrast in opinion, at one point Matar clarified that he felt no hatred toward either of the soldiers.

As the debate came to a close, Ali walked out of the room and voiced her final thoughts. “To face you is to face their personal demons,” Ali said, explaining the purpose of students’ walkouts.

When the debating finished, no clear consensus had been reached as opinions were divided all across the board.

When asked about whether or not he felt that the protest impacted the soldiers, Matar stated, “They are paid not to listen.”

Jackie Zelener, President of Highlanders for Israel and Vice President of Hillel was asked about the event and said that it “really helped foster a dialogue… Because we have such a diverse campus, it’s important to make sure that we’re all open here, that we can have these personal conversations.”

“It was great for me to hear that he doesn’t hate us,” said an emotional Kinneret afterward. “I just liked the vent…I enjoyed talking to them. It’s not something that we get to do that much. I think this is where it begins. I see this as a starting point to the right path.”

There was one point that everyone could agree on: each and every person interviewed felt that neither side made a significant impact on the other.