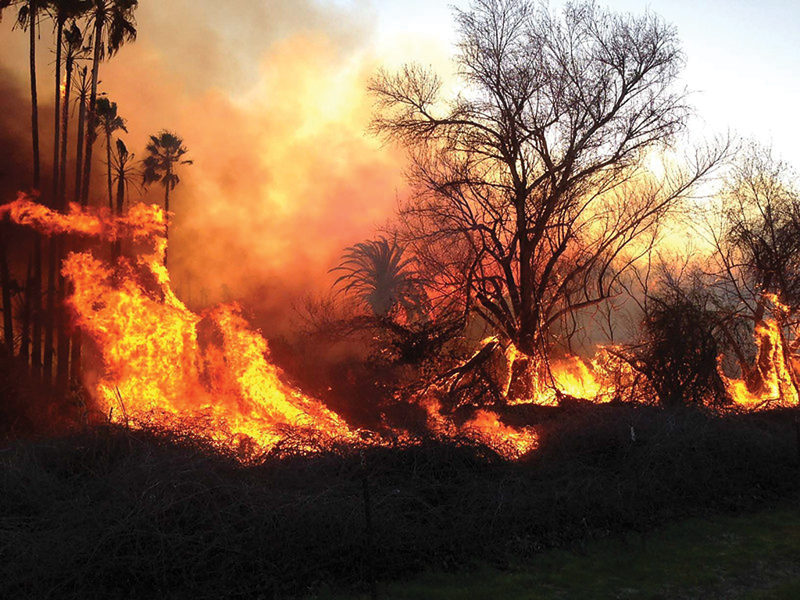 A brush fire started on Feb. 28 in the Santa Ana River bottom severely burned several victims and forced evacuations in the Riverside community.

The fire, which was reported around 4:30 p.m. on Thursday, burned over 300 acres of land in Jurupa Valley. The flames and giant cloud of smoke could be seen from the UC Riverside campus. Officials urged the community to leave their homes, but some decided to stay, however.

“We’ve been through this before,” said one of the local citizens. “I don’t worry.”

One backyard trailer did catch fire, but no injuries were reported.

Over 200 firefighters worked day and night to put out the blaze, using water-dropping helicopters and air tankers to take out the flames. By Friday night, the brush fire was 60 percent contained as the winds died down. The final flames were put out by Saturday night.

The cause of the fire still remains unclear. Power lines were down near the area where the fire started, but there is no word on whether or not that is the definite cause. About 2,000 homes remained without power Thursday night.

Thursday was also an unusually warm day and firefighters believe that the weather might have also played a factor.

Who will be UC President Mark Yudof’s successor?

The Board of Regents have launched a nationwide search for the next president of the University of California system. Due to “spating health issues,” UC President Mark Yudof will step down in Aug. 31 to teach law at UC Berkeley.

“The president leads the institution systemwide and is accountable to a 26-member Board of Regents, 18 of whom are appointed for 12-year overlapping terms by the Governor of the State of California,” the UC presidential job description reads.

Chairman Sherry Lansing will form a Special Committee to weed out possible applicants and make candidate recommendations to the regents. She will chair the committee of eight designated regents, in addition to Governor Jerry Brown, who will act as an ex-officio member, according to the UC Newsroom.

The national executive search firm Isaacson, Miller will help identify possible candidates to succeed Yudof. They have been involved in a number of UC searches for academic and leadership positions over the past several years. The special committee held their first meeting on Feb. 26, where members collaborated with the academic advisory committee and representatives of Isaacson, Miller.

The committee is expected to offer recommendations to the UC Board of Regents during their next meeting from July 16-18 at the UC San Francisco Mission Inn. UCOP has dedicated a webpage and an email contact to allow public input into the overall search.