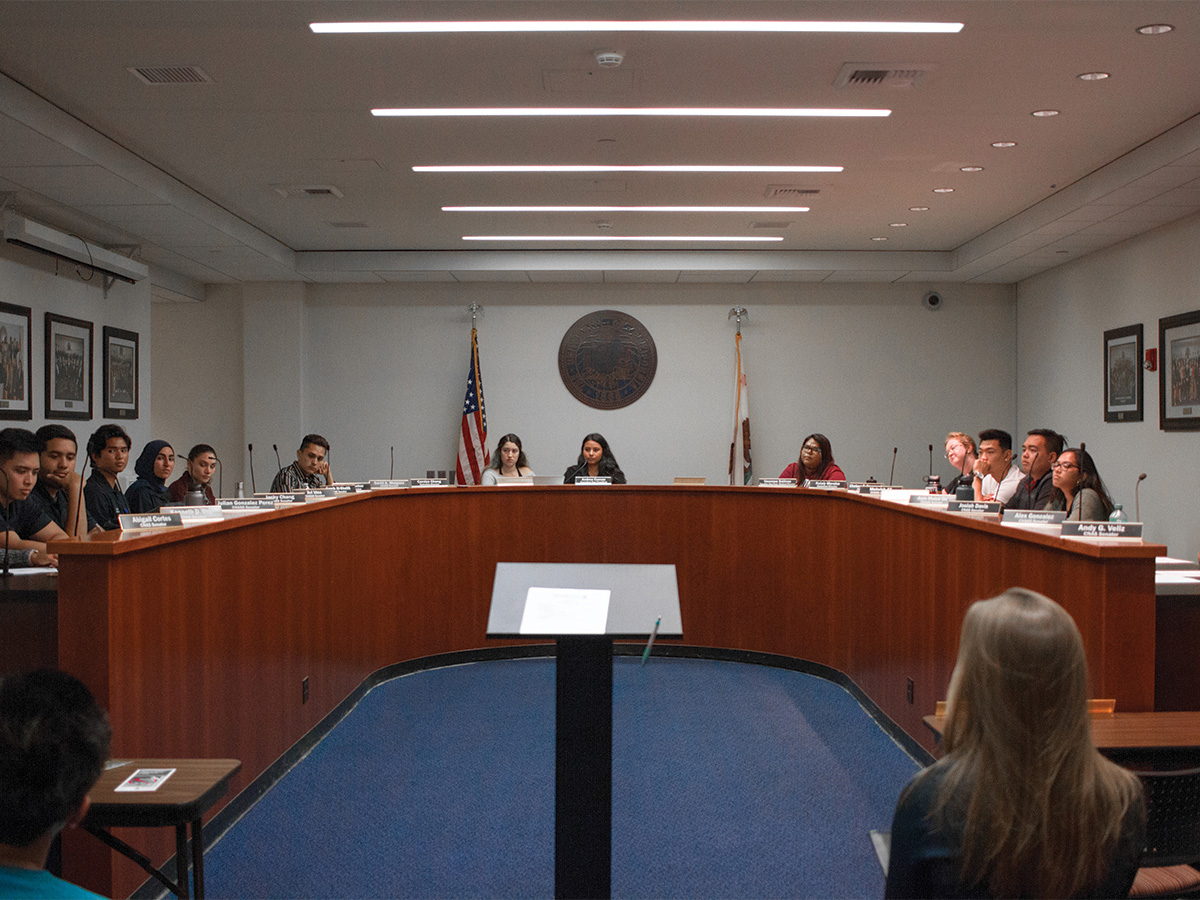 Motions to approve the current meeting’s agenda were called for by Executive Vice President Mufida Assaf and saw the movement of Ex-Officio reports to earlier in the meeting and the addition of Finance Hearing Minutes No. 13. Through an inquiry by CHASS Senator and President Pro-Tempore Orlando Cabalo, it was clarified by EVP Assaf that the former change was made to better accommodate the Executive Cabinet. Motions to open and approve the previous week’s meeting minutes took place as well.

A public forum then began with an introduction of Mohamad Almouzzan, chief justice of ASUCR’s Judicial Branch. Almouzzan touched on how his branch finally has a judicial council and that they were able to hold their first meeting in which justices took their respective oaths of office and reviewed the rules and procedures. In addition, it was also announced that the long awaited judicial review has officially commenced. He anticipates this process to take around three months and will work with EVP Assaf to present a report on their findings in the winter quarter. They hope to find no faults but they will work with the senate and executive leadership to address any problems that may arise.

In addition to these announcements from the Judicial Branch, Almouzzan also spoke on behalf of the Middle Eastern Student Assembly. He met with the President of the Academic Senate as well as Vice Chancellor Brian Hayes to discuss a variety of issues pertaining to Middle Eastern students. Of these issues was the selection of Halal options on campus. Almouzzan is working with the academic senate on behalf of MESA to not only offer Halal options on campus but to potentially replace the closed MOD Pizza with an entirely Halal restaurant. He hopes to reach out to the ASUCR senate in order to garner further support. Other issues Almouzzan also discussed include a recognition of the Christchurch, New Zealand tragedy and an annual statement in support of the Muslim community on campus.

A brief introduction was also given by the Underground Scholars during this public forum. The organization hoped to increase awareness of their mission to help those who were formerly incarcerated or impacted by incarceration. A greater presentation will be given in the following ASUCR meeting, where higher ups of the organization will talk more in detail about their mission.

Ex-officio reports were then given by the Executive Cabinet. During these reports, the executive cabinet detailed their many actions and accomplishments throughout the past couple weeks. EVP Assaf’s report had detailed many feats, namely when she and ASUCR President William Wang met with the office of the mayor to encourage students to reside in Riverside post graduation and how they can make the city more attractive. In her absence, EVP Assaf announced that VP of External Affairs Castillo met with councilwoman of ward 2, Clarissa Cervantes, to discuss possible future collaborations. In her absence as well, EVP Assaf announced that VP of Internal Affairs Kaur discussed the housing crisis with Campus Administrative Leadership.

President Wang’s detailed report focused on his three primary goals of increasing athletic engagement, entrepreneurship and alumni engagement at UCR. This included his hopes to increase school spirit through events and giveaways, increase campus resources to support startups and to restart alumni events where alumni can return and inspire current students. President Wang also met with Director Laurie Sinclair and the President Pro-Tempore to discuss basic needs. He met with the Provost and the Vice Chancellor to discuss this as well. Wang ended his report by discussing how he met with UCR’s housing director and proposed to help students struggling to find housing with an idea to have different housing companies and owners from off-campus housing come and help students find housing.

Other reports were given by First-Time College Student Director Lilian Romero, International Student Director Mario Gonzalez, VP of Finance Jeffrey Tran, VP of Sustainability Alondra Martinez, Marketing and Promotions Director Wallace Fang and Ethnic and Gender Liaison Jeanine Nassar. As part of Fang’s report, he discussed how he met with Vice Chancellor Hayes to make the process of bringing outside vendors easier. VP of Finance Tran announced that a total of $154,688 were allocated for student organizations. E&G Liaison Nassar discussed how she met with African Student Programs and their Director Dr. Jamal J. Myrick to discuss events and advocacy, and how she met with the President of MESA, Alaa Mido, to discuss the issue of halal food options on campus.

Three pieces of legislation were subsequently reviewed following its approval from the Legislative Review Committee. Senate Bill SB-F21-009 amends Chapter LV of the ASUCR bylaws regarding ASUCR Social Media Guidelines. The bill adds a disclaimer to statements that ASUCR makes, as requested by the office of the Vice Chancellor of Student Affairs, and authorizes the Judicial Council’s official Instagram page. CHASS Senator Christopher Kent voiced his opposition to the bill believing that the disclaimer delegitimizes posts and statements made by the student body and that if the school has a problem with the student government, they should come out with it themselves. This bill did not pass the senate with a vote count of 5-1-4.

Senate Bill SB-F21-010 amends Chapter II of the bylaws and allows ASUCR Senators to increase the number of primary authors on senate bills and resolutions. The number of authors for legislation is increased to a maximum of four from the current number of two for bills and three for resolutions. BCOE Senator David Kiroloss expressed how this piece of legislation allows for more collaboration while removing redundancies when creating legislation. This bill was approved with a vote count of 11-0-0.

The third and final piece of legislation reviewed was Senate Resolution, SR-F21-013 ASUCR Cooking Well Proposal. Written primarily by former ASUCR President Aram Ayra, the resolution calls for support for the cooking programs at the SRC. This includes a program at the SRC that teaches students how to cook and the Cooking Well office, which is not operable without the head chef who is on maternity leave. The resolution passed with a vote count of 11-0-0.

Public Comment was then held and saw Abhijit Rege, News Editor from The Highlander, taking the stand. After a brief introduction, Rege held the floor initially for any questions or concerns from the senate. Rege then posed a question to the senate inquiring about their thoughts and potential plans regarding the recent announcement that 95% of classes in the winter quarter will be held in person. CHASS Senator Victoria Nguyen responded by announcing that she, along with First Time College Student Director Romero and CNAS Senator Rachel Paredes, is working on a petition that advocates for students to be able to have hybrid options. First Time College Student Director also responded by announcing that a walkout will be held to show support for the cause on Nov. 18 from 12-5 p.m. CHASS Senator Helen Chu had spoken with faculty and noted that there are difficulties with implementing a hybrid system as quality of education will be very different and the burden will be placed on professors and teaching assistants who will have to balance the two options. Senator Kiroloss discussed how he is working with the Student Voice Committee to run a case study to gage students’ GPAs and to use the statistics to observe how the transition has affected students. Based on the statistics, one can make an argument in favor or against the change.

No subsequent announcements were made, and the meeting was then adjourned at 7:43 p.m.