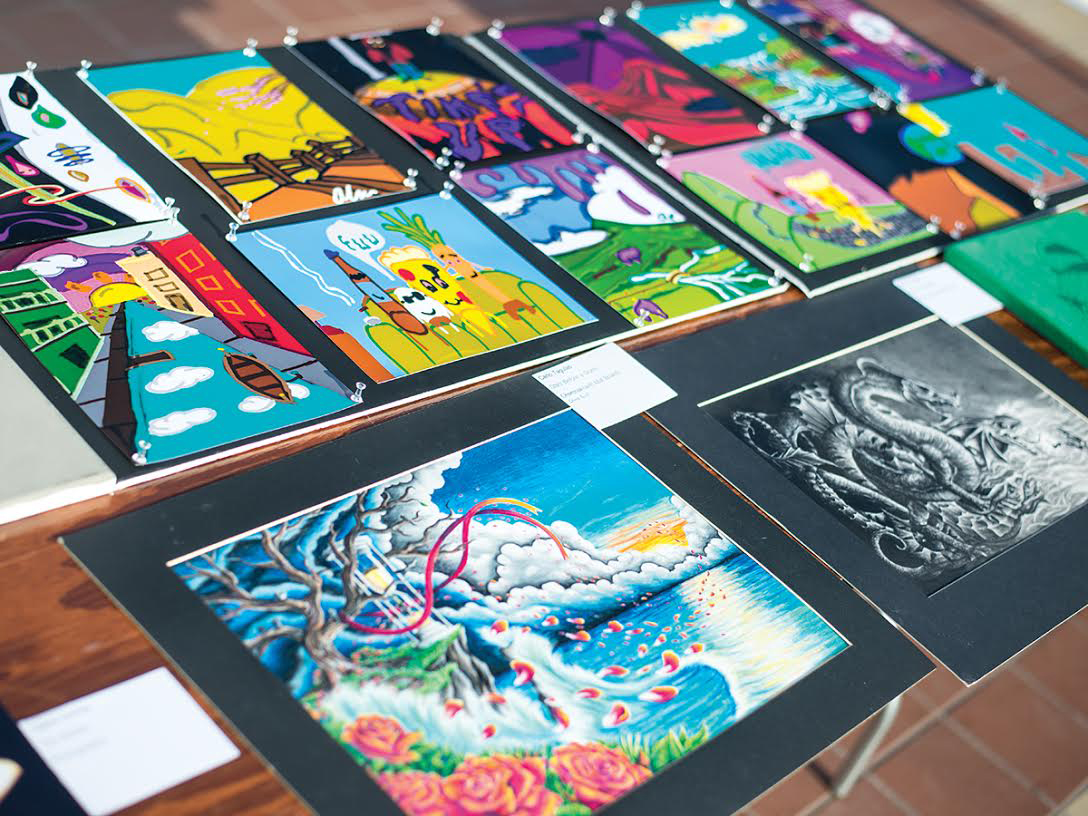 Outside of S.T.E.M., business, pre-law and other humanities, we see very little of UCR’s academic art scene. This was ASPB’s idea when they hosted Arts Walk 2022 at the Belltower on April 21, finally back in-person after two years.

The event not only featured 20 of UCR artist’s impressive work, but held live performances from the school’s musical artists and gave visiting students the chance to produce their own work with vinyl painting and magazine collaging. Not to mention the Instagrammable vegan soft-serve ice cream many came for.

ASPB Contemporary Culture Directors Litzy Cruz and Charlie Tran had to bring this program back to life from the Instagram posts of students’ art that had taken the place of Arts Walk for the last few years. A second-year art history major and third-year media and cultural studies major were tasked with building an annual event with limited idea about its precedents in person.

“Since this is the first one back in-person since two years ago, it was a bit difficult trying to come up with the logistics,” said Cruz, “but I think it came together pretty well.” Being able to look into the past and see what was done, Cruz still remained aspirational on what the event could offer. “Usually, we try to do things bigger and better than the year before,” she said.

Out of over 50 submissions from UCR students, 20 were selected to be displayed at the event — probably to allocate budget towards providing each artist with respectable space and a tent to display their work in the best of outside conditions.

The art ranged from hand-created art to photography and even music. “It showcases both kinds of art,” said Jazimne Belcher, a third-year psychology major and ASPB volunteer, after performances from the bands El Segundo and Studies of the Starcross, as well as Kpop dance team Tartan Seoul. They are among other performers, as the program lasted the whole two hours of the event.

Sanyu Nakimera, a fourth-year neuroscience major who runs a digital art business on the side, was one of the talents provided with the chance to display her work. After delving into art in high school and starting her business mid-pandemic, she has only really displayed her work on the online platforms Instagram and Etsy. “Technically this is the first time I’ve really shown my art physically,” she said. “I heard about the event when they advertised it, so I turned in my five pieces.”

Venturing onto her Etsy and Instagram under the same name, “Snakreate,” her art is exactly as she describes it. She emphasizes urban environments, depicting places like Tokyo and the version of Brooklyn in “Spiderman: Into the Spider-Verse” while incorporating pop-culture characters such as Miles Morales and those from the anime “One Piece.”

Selling large posters, holographic prints and regular prints, running this business is not easy along with being a pre-med student. “It’s a hard balance, but I wouldn’t have it any other way,” she said. “Everyone gets to see my art through their eyes, and I get to speak to other people through my art.”

Her general tip for other students pursuing an art business is to dedicate time — whether it be a few hours a day or few hours a week — to do so. “When you have the time, take advantage of it,” she advised. “It’s hard after a long day’s work to find the motivation for it, but just trust the process.”

Speaking of taking advantage of time, third-year and first-year studio art majors Luna Lopez and Israel Mora took the opportunity to display their work at the Arts Walk despite not making it on ASPB’s selection for the program. Identifying as abstract and surrealist artists, they brought their own easels to share what they really wanted peers to see. Mora was openly working on a piece of their own, painting a liquor store in the dream-like backdrop of a sunset.

“Everyone’s supportive of everything that’s happening here, but we didn’t really ask for permission and just kind of showed up,” Lopez said. “Just put yourself out there, you know?” General ASPB staff found it not to be disrespectful. This act may encourage other UCR artists to create their own space when administration can’t always provide it.