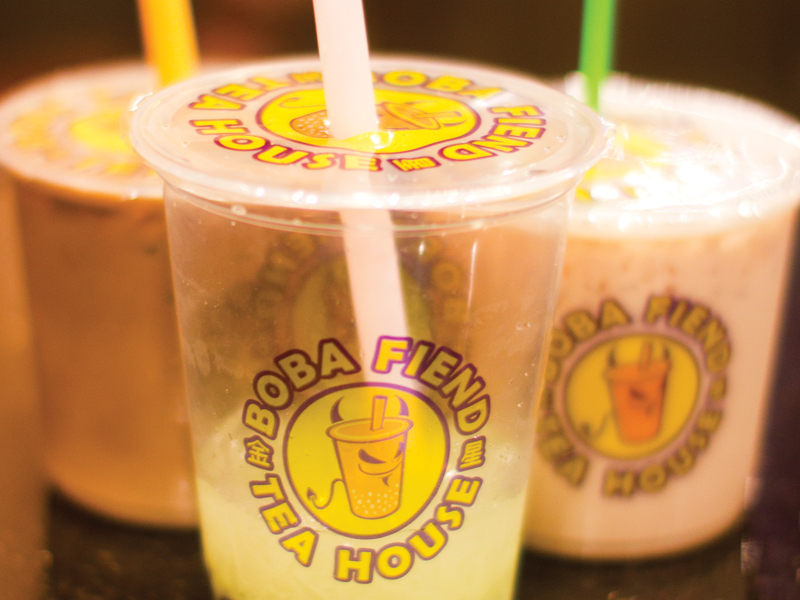 If you want to attract a crowd on a Monday night, boba would do the trick. But even better, what about free boba? That is exactly what attracted a large crowd Monday, April 8, for the grand opening of Boba Fiend Tea House on Iowa Avenue. Riverside is no stranger to boba tea houses and the grand opening was indeed a busy night for this tea house.

I showed up around 8 p.m. and the line was out the door. Lil’ Wayne was blasting loudly. The music was mixed with the chatter of people inside and outside in line. When I finally made it through the door I was greeted by orange walls and bright lights. Three plasma TVs were mounted on different walls. There were also red couches and a few tables. It looked like a teenager’s dream room; very modern and laid back.

It took about 10 minutes to get to the cash register and order. It wasn’t bad considering how busy they were. The options being offered at the grand opening were milk tea, flavored tea, yogurt tea and coffee tea with many different flavors including almond, chocolate, mango, strawberry, honeydew and many more. I decided to try the milk tea, honeydew yogurt tea and coffee latte tea.

I walked over to the side where I could see the drinks being made as fast as possible with looks of anxiety on both the workers and the customers waiting. I managed to find a table in the corner and also discovered that they offered free Wi-Fi with a password posted on the counter.

Waiting for my order, Kendrick Lamar’s voice could be heard playing along with Drake and other artists of the same genre. The music quickly made me forget I was at a restaurant and not at a party or club. The cashiers had to shout out the number of the customers’ order in order to give them their drinks. Amongst the loud music blasting, people talking and whiz of the blenders, it was very hard to hear the numbers being called.

My drinks took about 20 minutes to make and when I went up to grab them, I was told they had run out of boba. This was really puzzling because after all, I was at a boba tea house where boba is the specialty. Not only had I paid for two drinks after my complimentary one, but I had also paid extra for boba which I was not given. Instead of trying to compensate what I paid for or offering me something else, I was given one extra stamp on my punch card.

I argued against this because I felt I was getting ripped off. The girl looked shocked when I said this but went to talk to another worker and came back to stamp out my whole card for a free drink. After this frustrating debacle, I went back to my table and told myself to not let what had just happened influence my opinion of the drinks.

The first drink I tried was the milk tea. The first sip was very rich with the tea flavor more than the milk flavor. The taste of the tea was so strong it lingered long after I was done with my first sip. The crunchy ice made the drink more like a slushy. This milk tea was definitely stronger and richer than other milk teas I have tried.

The next drink I tried was the coffee latte tea. Be forewarned, the coffee is strong. It also had a rich chocolate taste which made it a more of a very strong mocha latte. Perfect for late-night study sessions.

The third and last drink I tried was the honeydew yogurt drink. All the yogurt drinks are not made with milk, but with water instead. This green concoction was sweet and rich with the taste of honeydew. It was amazingly refreshing and reminded me of summertime on the beach. Full of rejuvenating flavor, it’s the perfect drink for a humid Riverside day.

Although there was nothing particularly different or special about Boba Fiend, it’s good to know that there is now another option when in need of boba. Aside from drinks, Boba Fiend Tea House will also offer snacks which were not available at the grand opening. The drink prices range from $3 and over. Boba Fiend Tea House is a place where you can socialize, relax and even study. Hopefully not all nights are as hectic as the grand opening.