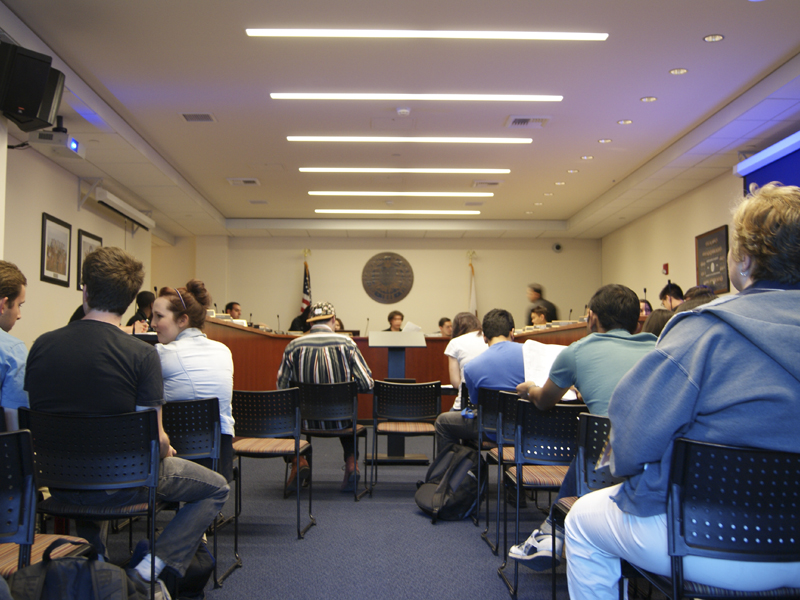 Members of the public called for a change to the elections code, which involved lowering the minimum number of candidates required to form a political party during last Wednesday’s ASUCR senate meeting. The senate passed resolutions to add political parties next to the name of a running candidate, which bred concerns of further delaying the elections process. Another resolution passed seeks to allow student organization to rent out the Exchange Store for conferences and meetings.

There were approximately eight members of the audience who spoke during the public forum period, one of whom included Ben Roden, a former member of R’Voice. Due to the loss of numerous candidates, R’Voice was disbanded as a party this month. According to the Elections Code, a minimum of seven members is needed in order to form a political party.

Other speakers, such as [YOU]CR candidate Kareem Aref, shared similar sentiments about the party system and critiqued the structure of the ballot itself.

“The ballot does not reflect the party affiliations,” said Aref. “The debate itself is structured so it’s based on party. A party representative can speak. It’s not the individual who can speak. That fact alone hurts all the students who are running.”

Another running candidate of [YOU]CR, Fernando Echeverria stated “It’s not just a single-party issue, but it’s a multi-party issue. The way the ballot is set up, you have to click on the name to learn about the person.” Echeverria explains as a burdensome process.

As the party signatory of R’Voice, Christine Shi expressed her frustration over Roden’s misrepresentation of their party. Shi felt that Roden spoke in the interests of his candidacy, but spoke offhandedly about his leadership role in R’Voice. Roden could not reestablish the party because he did not have the legal right to impede on her authority, according to Shi.

President Liam Dow supported the idea of variation and competition but said, “I don’t think restricting R’Voice from running is appropriate.”

Vice President of External Affairs Lazaro Cardenas questioned how that minimum was determined and what purpose the existence of political parties served. Elections Director Harmony Chai responded that the the previous system gave independents an unfair advantage based on a popularity system. The purpose of the party system was to “increase voter turnout” and “efficiency” during the elections process, according to Chai.

“I was actually unaware … when I came into [the elections committee]. Who’s to say that two can’t make a party? So I feel like that is something I can definitely discuss with the elections party,” said Senator and Assistant Elections Director Kristina Morelos.

But Dow felt the values instilled in a party’s platform also paralleled the “values to a student government.” Campaigning would be almost meaningless if there was no party system, explained Dow.

Senator Sai Patadia asked if Chai could contact IT professionals to add the candidates’ party to the election’s ballot. Chai elaborated that the elections ballot “took weeks” and she “wants to make sure the elections run on time.”

Deputy Director Laurie Sinclair reiterated that, “[The elections] need to move forward. It’s really late in the game and we can’t really postpone the elections.” According to the ASUCR Constitution, changes to the election date must be made six weeks prior.

Chai said the party system allowed students to be more “reflective” and make connections with the candidates through “face and name recognition.” She says the candidates should be encouraged to set own personal senatorial goals not just those of the entire party.

Morelos advocated a similar gesture, but felt that independent candidates may not have the option of forming a party because they may not know anyone. Senators such as Aaron Johnson felt Chai did not accomplish her goals of “so-called leveling the playing field.”

In response to Johnson’s comment, Cardenas stated, “If you’re an incumbent, check your privilege. Incumbents have a lot of power.” He asked that senators re-running find out more information for themselves.

To wrap up the discussion, Senator Johnny Ta motioned to “add party names next to the candidate name contingent on the fact that it does not hinder or delay the elections.” The motion passed within the senate by a vote of 11-0-1.

Final pieces of legislation included the passage of the Bear Den resolution, which will allow the former Exchange Store to be used by student organizations to rent out through the Highlander Union Building system. Authored by Jo, the resolution also passed with the same vote.

Ex-officio reports were given by Tim Grove, a representative from ASPB. The theme for Spring Splash on May 4 is “Water Conservation,” where students are encouraged to bring their own water bottles (BYOB).

Vice President and External Relations Director Jane Kim of the Student Alumni Association advertised the Business Career Conference. Taking place on April 13, students were given the opportunity to network with UCR alumni in the business field.

Senator Emmanuel Alloh is working with SoBA senators to add alternative concentration classes. He is also meeting with Police Chief Mike Lane about participating in the next Chancellor Town Hall on Campus Safety, due to increasing concerns from the African-American population over racial profiling.

Senator Spencer Castrellon is working with Senator Niela Darmani, in order to add more student-donated murals around campus, which is intended to “add campus spirit.” He is also meeting with Associate Dean of Student Academic Affairs Peter Graham in order to create a teacher-student program, which will allow students to have a more hands-on approach.

Senator Aaron Johnson is attempting to establish “Meet the Senate II,” which is purposed with highlighting the newly-elected senate for the next academic year in 2013-2014.

Senators Megan Crail and Sean Famian are attempting to set up the “Big Buddy” program as a way to “keep students in engineering.”

Senator Johnny Ta will take Crail’s position as an ASUCR representative on the Task Force on campus safety. The task force was created by Chancellor Jane Conoley, in response to the upsurge in criminal activity during the months of January to March.

During the finals’ week of spring quarter, Senator Famian will continue the snack wagon initiative, where senators will be passing out snack packs for students studying in the Tomas Rivera and Orbach Library.

Vice President of Internal Affairs Kevin Jo delivered his Green Committee Action Plan report and revealed a new initiative entitled “Save the C,” which will take place from April 22-26 during Earth Week. Based on its current state, the “C” monument is anticipated to crumble within five years, as reported the Physical Plant Department.