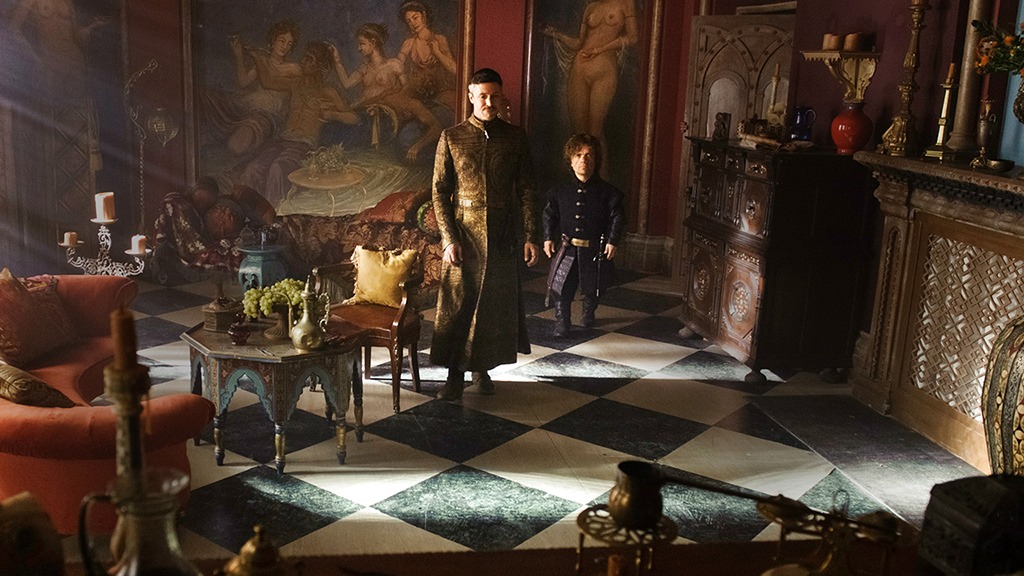 t’s hard enough as it is for showrunners David Benioff and D.B. Weiss to recreate the massive world of “Game of Thrones,” but it’s even more of a challenge to bring to the screen the most beloved book of the series thus far. “A Storm of Swords” is known for its shifting tones: from comfort to desperation, from tense anticipation to “holy crap, what the hell is happening?” Luckily for them, this season has upheld those feelings by giving me the same slow burn I felt while reading the novel; I know that every word and every action is going to lead to horribly tragic and life-changing (for the characters in the series, that is) plot twists.

Sunday’s episode strived to push the story forward, but we are far from getting to the real conflicts of the season. As a fellow fan had put it: It’s like sautéing vegetables in a pan before you put the meat in, and “Walk of Punishment” was nothing but vegetables. However, there was an intense scene between Robb Stark and his uncle, Edmure Tully, with sardonic side-remarks by one of my favorite minor characters, Brynden “Blackfish” Tully (portrayed wonderfully by English actor Clive Russell of “Sherlock Holmes”), the uncle to Edmure and Catelyn.

Edmure had been proud and greedy, pushing Gregor Clegane back when Robb was trying to lure the savage into his lands to have him surrounded and killed. Edmure’s blunder had cost Robb over 200 men, and it is a number Robb cannot afford to lose against Tywin Lannister. Richard Madden has been fantastic and spot-on since season 1 as the Young Wolf, taking up after Ned as an honorable ruler and a formidable opponent on the field. However, despite all his glory and righteousness, Robb also made the mistake of marrying the wrong woman, a mistake that has cost him men, respect and is now instigating his slow downfall as King of the North. He is his father’s son: both unwilling to waver in their decisions until the end, but if last night was any indication, no amount of the Young Wolf’s strategies and planning can save him from the ever increasing Lannister-Tyrell forces.

Tywin is cold, calculating and merciless, and his remark that Littlefinger shall marry Lady Lysa of the Vale, and lure her formidable forces into the war against her own nephew, is nothing short of devious.

There was another emotional scene involving Catelyn, who mourns the death of her father. Though nowhere near as moving as her scene last week, Fairley is a capable actress, eliciting the right response from her character to suit the show’s needs. Though less weepy in the novels, Catelyn is given more and more screen time––a good sign, as she has always been a strong, upright character in the books and will definitely add more substance to her future role in the Riverlands.

In Astapor, Barristan Selmy and Jorah Mormont have both become advisors to Daenerys, and even though both seem to have conflicting opinions about each other and for their Queen, it’s also clear that they have her best intentions at heart. It would appear that Barristan is being underused, as his character carries more mystique and importance in the novel, but the season is young and there is plenty of time for the writers to create another niche/role for the ex-Lord Commander of the Kingsguard. Emilia Clarke has been true to her role as khaleesi, capturing the young queen’s newfound confidence and poker-face diplomatic skills as Dany negotiates the purchase of all 8,000 Unsullied plus all the boys that are still in training. It is a testament to how far Dany has come as a leader that it’s hard to gage, even by Jorah, her plans and reasons for buying untrained boys as well as trading her largest dragon, Drogon, for the soldiers.

Dany also takes into her custody the translator Missandei, played by British actress Nathalie Emmanuel. A grown woman in the show, Missandei was no more than ten in the books, and her young age is often a focal point of her relationship with Dany. Though much older in the show, it would appear through the dialogue that the writers are at least keeping her personality intact. Those furious at Dany for agreeing to trade a beloved dragon for slave-soldiers need not to worry; the queen has learned a thing or two from her time in Qarth in regards to deception and what it means to be a strong ruler, and she has also valued keeping these thoughts to herself, as evident of her reprimanding Barristan and Jorah for questioning her decision.

Other memorable instances include the departure of Arya and Gendry with the BWB (Brotherhood Without Banners) and Hot Pie’s decision to stay behind at the inn as a baker. After almost three seasons of seeing the trio together, it was bittersweet to see them split up. Hot Pie bakes Arya bread in the shape of a wolf and affectionately calls her “Arry” for the last time. It’s moments like these, when the writers know exactly what to put in to tug at the viewer’s heartstrings, that make “Game of Thrones” so great; in the midst of political schemes and battles, there’s still time left for friendship and goodbyes.

Speaking of friendship, it appears that Jaime has developed a respect and concern for Brienne of Tarth. Captured by Bolton men, Jaime at first coolly mentions Brienne shouldn’t fight when the men rape her when they make camp, as she is not the prisoner for value between the two. However, when Jaime’s prediction came true, the Kingslayer appeared deeply disturbed by his companion’s sounds of struggle and quickly formulated a story about how Tarth is rich in sapphire and Brienne’s father would gladly pay for his daughter’s “unbesmirched” return in her weight in the precious gemstone.

Arguably one of the most intriguing characters of the series, we are finally shown Jaime’s evolution from arrogant pretty-boy to a man of honor and conscience, and who better to enunciate the change than Nikolaj Coster-Waldau, whose mannerisms and appearance is perfect for the transformation of the Kingslayer. Though he was able to retain Brienne’s honor, “Walk of Punishment” ended on a horrific note as the smooth-talking Jaime was put back into his place by the Bolton men, who served him the ultimate insult by chopping off his sword hand.

Elsewhere, there is a cat-and-mouse game between Theon and his torturers. Set free by the mysterious servant-boy from the previous episode, he is once again saved by him after being almost raped by his captors. This is a brilliant way to officially introduce Iwan Rheon’s character and it rings true to the shifting tone between comfort and despair aforementioned as part of what made the third novel in the series so critically acclaimed.

What would have otherwise been a strong episode is tainted by the useless and confusing scene between Stannis and Melisandre: Known as an emotionless, unbendable ruler, Stannis uncharacteristically lusts after Melisandre and wants her to make him another son, to which the Red Priestess rejects him with “your fire is burning low.” Ouch. Nothing came of their interaction other than the fact that she will be leaving for a while and Stannis repeatedly stating how he has been humiliated. That’s old news, and it was frustrating and quite frankly boring to see the two interact.

I’m always of the opinion that any scene involving Tyrion Lannister is golden — no pun intended — but the past two episodes have been a little lackluster in the little lion’s department and this week was only a step up from last week’s disaster. All brothel and copious sex scenes in the show are widely known as fillers to entertain the audience because there’s nothing else important to fill the gap. Given the new responsibility as Master of Coin — the first scene in which Tyrion meets Tywin, his sister, Varys and Littlefinger for the small council meeting was genius — Tyrion adjusts to his new position with the help of Bronn and the squire Pod, who saved his life in the last season. Since squires don’t get paid, Tyrion decides to give the young virgin the gift of three prostitutes, with hilarious results. Funny, yes, but ultimately useless for the plot other than for the writers to throw in some comedy between all the seriousness of “Walk of Punishment.”

One thing I did miss, though: foxy Margaery and everyone’s favorite grandmother, Lady Olenna. For two characters that were just introduced this season, they sure made an impact, and I didn’t even bat an eye at the lack of Sansa, who has been around since the beginning. After introducing the Reed siblings, Bran is also missing from this episode, but I’m simply hoping the writers are taking their time to really develop and refine the young Stark’s complex storyline.