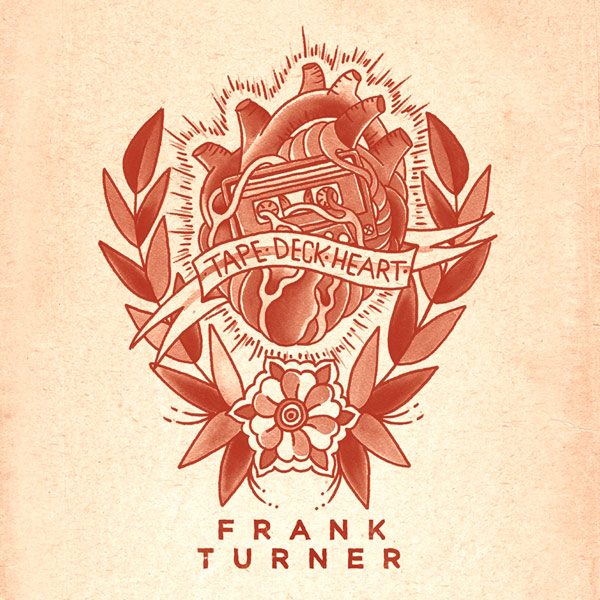 Frank Turner is easily one of the most emotionally expressive songwriters in music right now. On Turner’s fifth solo album, “Tape Deck Heart,” his first since 2011’s “England Keep My Bones,” Turner pours out his feelings on love and life with his clever and poignant lyrics. Though not as strong as previous albums, Turner still manages to outshine most others on this diverse, if occasionally cliché effort.

The album begins with one of its strongest tracks: the lead single, “Recovery.” Turner starts the song with just an acoustic guitar, singing “Blacking in and out in a strange flat in East London / Somebody I don’t really know just gave me something / To help settle me down and to stop me from always thinking about you,” before his backing band, the Sleeping Souls, kick in with a steadfast drumbeat and happy, melodic piano. The track builds towards a climax before Turner belts out in a near scream that if he or anyone wants to get better, they must have the right mindset.

The next track that truly captured my attention was the LP’s fourth track, “Plain Sailing Weather.” The lyrics “Just give me one fine day of plain sailing weather / And I can fuck up anything, anything / It was a wonderful life when we were together / And now I’ve fucked up everything” accompanied by a soft, strumming guitar gives the song a self-depreciating start before exploding into the next chorus with a jolting electric guitar. Turner continues this theme throughout the song, eventually detailing how his lover would “Fold your hands, speak my name like a curse” as he tried to explain himself.

As personal and introspective of a record it is for Turner, “Tape Deck Heart’s” best song is an anthem dedicated to his punk roots and love of a good concert. “Four Simple Words” starts as a slow piano ballad in which Turner laments that one is probably listening to him through headphones alone. It then explodes into a big drum roll and a chugging guitar. Turner ecstatically yells during the chorus, “But I’m no good at dancing, yet I have to do something / Tonight I’m going to play it straight, I’m going to take my chance, I want to dance.“ He praises the independent, hard-working artists when he says, “I want bands who had to work for their keep / Drove a thousand miles and played a show on no sleep / Sleeping on the floor in a stranger’s place / Hungry just to do it all again the next day.” The track ends with him screaming the chorus while his band chants “wo-oh-oh “ in the background.

Turner triumphs his non-commercialized past and romanticizes the thought of such a hardworking band making it big. Turner turned to folk singing after a short time with the band Million Dead, and released four albums on the independent label Epitaph before signing with major label Interscope for this record.

The album ends with the heart-tearing ballad, “Broken Piano,” in which Turner croons in falsetto, singing about carefully destroying a piano so that one could only play minor melodies. A piano’s soft plunking and distorted keyboard hum in the background before a pounding bass drum kicks in to give the song an uplifting, hopeful quality––though a sort of sad sentimentality can be felt.

For as much of a breakup record as it is, “Tape Deck Heart” is full of optimism. Turner’s earnestness is a bit cliché at times, but it’s that same earnestness that makes most of his songs so vulnerable and real. Other highlights include “Losing Days,” “Polaroid Picture” and “Anymore,” though the whole album is solid. “Tape Deck Heart” is certainly one of the top records of the year—and possibly my favorite. For those that dismiss this record as more generic or cliché than Turner’s previous work, you are missing out.  It may not be as strong as his previous records, but one would be hard pressed to find something better and more honest from an artist.