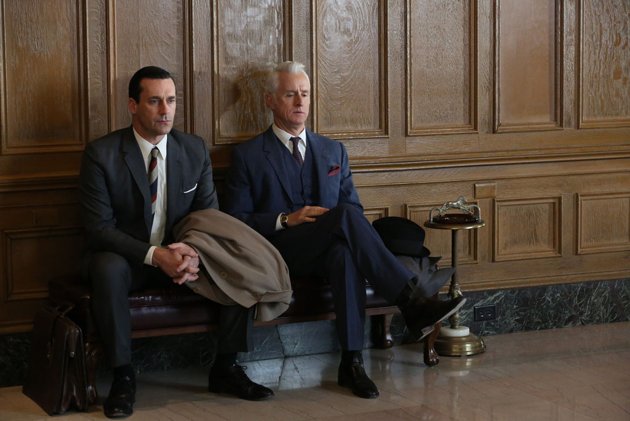 Matthew Weiner, the creator of the phenomenal “Mad Men,” has returned as the main writer for the most recent episode “For Immediate Release.” This newest installment was nothing short of genius, even as the show strays away from the characteristic symbols that dig into the troubled past of Don Draper. “Mad Men” had some great quips throughout, but also some wonderful twists.

For the hour, the audience is purely entertained by the inner workings of the ad agency––one that has hardly been the center of attention since season 6 began. It is nice to see the cast in their respective roles as fans witness all the hidden drama behind the curtains of the main stage.

The crux of the episode is concerned with hidden agendas, which all seem to connect in one way or the other towards the end. However, when the episode began, everything floated on a much lighter note. Pete, Joan and Burt were all eager to get rich after making the decision to take the company public, Roger was waking up to cute blonde stewardess and Megan was chatting away with her lovely mother.

Within minutes, “Mad Men” took a crucial turn and let its key players fall off a cliff, while audiences hoped that they could grab a hold of something just in time.

For Don, it all begins at a dinner—one that Pete was kept blind about—with Herb, a Jaguar representative and a dreadful man who traded his business for the pleasure of Joan’s company a while back. Don has since despised the man. So when Herb decides it to be a good idea to subtly criticize the brains of Sterling Cooper Draper Pryce (SCDP), he has another thing coming. This turns out to be one of Don’s business cards with the name of a young man who Herb suggested would be helpful for Don’s  creative endeavors written on it. “He’ll be handling your account from now on,” says Don as he prepares to leave the dinner.

In the meantime, Peggy remains in what seems to be a failing relationship with her boyfriend Abe. Abe is of course the benevolent one, and Peggy is just overbearing and demanding. Elisabeth Moss is fantastic as Peggy nonetheless and does some great work during a tense romantic scene with her boss Ted who shares a kiss with the cunning head of copywrite. Peggy has not stopped thinking about Ted since; I predict an affair coming.

In other relationship news, Trudy is simply too good for Pete Campbell. He refuses to let her hang his misdeeds over his head. But, in all fairness, he does deserve the cold attitude.

This brings me to the brothel where Pete and peppy co-worker Bob Benson (James Wolk) have just finished celebrating some recent news: the company’s stock will be sold at eleven dollars a share. Although, this does not mean much of anything good for Pete, who runs into father-in-law and client Tom Vogel (Joe O’Connor) after his own encounters with a prostitute.

At this point in the episode, the events transpired became a lot more enthralling. Pete, already worried about his recent encounter with Tom, sets ablaze the mood in the office as he instigates an argument with Don. Jon Hamm is magnificent to watch as he shrugs off the little bug of a man that is Pete Campbell and stands firm with his decision to rid everyone’s lives of Herb. Pete and Joan are equally displeased, especially since their sought-after fortune has now been buried with all other hopes now that their well of clientele is depleting.

The entire cast is mentionable here as they all did fabulous work. Everyone had their own moments of humor, sadness, frustration and shock. To top it all off, silver-tongued devil Roger Sterling has the only good news, and that is that the company now has a chance to reel in Chevy with an ad campaign for their new car: the “Chevy XP-887.”

John Slattery must be the best looking fifty year old around, and if that weren’t the icing on the cake, he fits the bill perfectly for Roger Sterling every time. Sterling’s charms not only won him a cute blonde, but a useful connection to catching clients at the airport.

SCDP seems to have it all, except for some billable clientele, since well-known company Vicks drops them as their ad agency. Never do business with family.

When all hope seems lost and Matthew Weiner’s writing can’t seem to get better, Don and Ted happen to run into one another at a bar in Detroit. For them, this means the end of Chevy until they realize that both of their companies could win over the hearts of wealthy car company by merging.

I was drawn into the dialogue between Ted and Don, who sip on their Old Fashions while pitching their presentations to one another, but also enjoyed some good laughs. I truly was caught up in the moment and off-guard. Peggy Olson’s face when realizing that Don was once again her boss was enough to get my hopes up for the rest of the season. But I keep thinking Weiner might just be toying with me and setting audiences up for a big cliffhanger at the end of the season.

If you think “Mad Men” can’t get any better from here, feel free to do some research on the “Chevy XP-887,” also known as the Chevy Vegra––a car that was hoped to be the next Mustang.

Weiner has hit the mark once again by proving that his writing and cultural references can hold up an episode without trying to squeeze in Don’s inner demons. In fact, Don’s newest sin wasn’t even touched upon, seeing as mistress Sylvia was never seen on screen.

All in all, who knows what to expect next week.