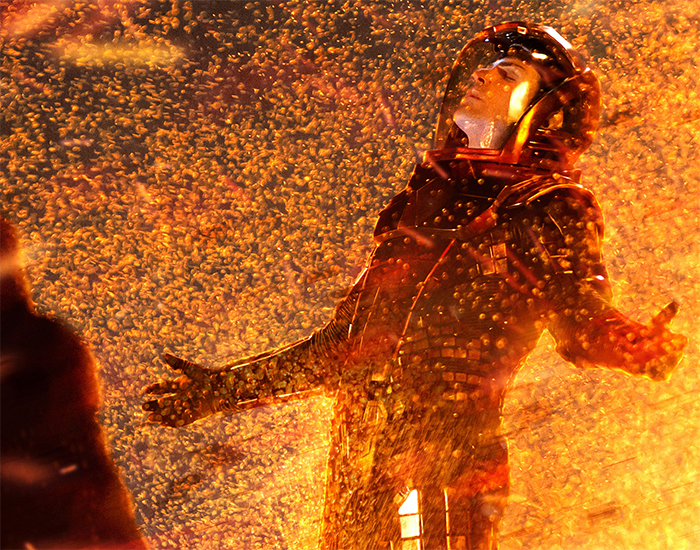 My first thought after leaving the theatre is that “Star Trek Into Darkness” is not as good as J.J. Abrams’ 2009 reboot. Although Abrams has an obvious appreciation for the series, “Into Darkness” is simply not as well-crafted as its predecessor. With that said, the newest installment in the series is still a wild ride and I had fun all the way through.

Both Trekkies and critics alike have complained that the modernized take lacks the deep insight of original Star Trek creator, Gene Roddenberry. On the contrary, “Into Darkness” does promote its thematic elements, incorporating a clear commentary on the risks of uninhibited militarism––a theme that leads to interworld conflict and acts of terrorism, a threat widely discussed today. It is true that there is a comparative lack of social commentary sewn into the new film, but I did not pay admission to see an art house flick with philosophical undertones. I paid my six dollars to see the captivating Chris Pine barely make it out alive of heart-stopping sticky situations.

When the movie begins, audiences are immediately thrown into a foreign planet where a nearby volcano grows angry as Captain James T. Kirk (Chris Pine) attempts to outrun primitive extraterrestrial life forms. Kirk has no problem tossing a few of Starfleet’s guidelines in the trash in order to save himself and his crew, but he does suffer a temporary demotion from captain to first officer.

Pine is fantastic all the way through, from fistfight to fistfight, moments of sentimentality and even a threeway with two aliens. As the great Captain Kirk should, Pine radiates charm and is always waiting for a moment to reveal a slight smirk. Of course, Captain Kirk would be nothing without his trusted First Officer Spock, the restrained Vulcan gearing up for a chance to preach the need for logic in all dire circumstances. Zachary Quinto does great work as Spock, whose sharp glares invoke nothing but the utmost seriousness.

The relationship between Spock and Kirk is one of the most notable points of the film. Kirk, being the spontaneous adrenaline junkie he is, engages in many arguments with his Vulcan pal. But even though there is friction, there is a clear yin and yang aspect to the two, who maintain balance in a strange, but effective, fashion. Their bromance and mutual respect ultimately forces them to take drastic steps in order to save each other’s lives. Without Kirk, Spock would have been engulfed by the lava in the volcano. Without Spock, Kirk’s life would be in the hands of Khan, a familiar villain who catches the USS Enterprise off guard.

Khan, also known as John Harrison, is a name known by dedicated Trekkies or those who saw “Star Trek II: The Wrath of Khan.” Powerfully played by British star Benedict Cumberbatch, Khan is a conniving character and masterful combatant who possesses superhuman intellect and strength. The crew goes to hell and back on the planet of Kronos in the Klingon territory in order to hunt him down, and his agenda is perfectly played out due to some unfortunate sabotage upon the crew of the Enterprise.

Although he knows how to easily take out members of the Klingon race, Khan surrenders himself to Starfleet. The reason for Khan’s willingness to raise the white flag becomes clear later on when the brilliant villain’s plan comes into fruition. Until then, Cumberbatch gets to voice Khan’s seemingly sympathetic, but scheming monologues from the safety of a cell. His diatribes from inside the cell are well-crafted and conniving, making him out to be one chilling villain.

In no time, controversies erupt and a battle emerges in space and back on Earth. The exhilarating action scenes and phenomenal special effects alone are worth the ticket price, especially as the Enterprise dazzles in all its glory. Not only are the fights in space exhilarating, but watching the Enterprise and its foe’s spacecraft tumble through Earth’s atmosphere will blow you away. Khan’s destructive plan should not be missed, especially since they take place in familiar locales like London and San Francisco.

“Star Trek into Darkness” is pure blockbuster entertainment, all while being supported by a wonderful cast. The comical Scotty (Simon Pegg), Zoe Saldana’s rough and tumble Uhura, John Cho’s Sulu and the sexy new addition to the Enterprise family, Carol (Alice Eve), all have some good moments here. Zoe Saldana is particularly good as the badass communications officer who is brave enough to approach a gang of Klingons, even in the midst of a love feud with Spock. Eve is nice on screen, but audiences really don’t get to see enough of her until her role becomes absolutely necessary to shove the plot forward.

Trekkies may think that “Into Darkness” hardly lives up to what the franchise should be, but Kirk driving a 1966 Corvette off a cliff in the first film was no subtle metaphor. We see the version meant for today’s audience, which does not completely abandon Roddenberry’s centermost thematic perspective on uninhibited militarism.

Either way, “Star Trek Into Darkness” is a thrill ride and two compelling hours of worthwhile entertainment.