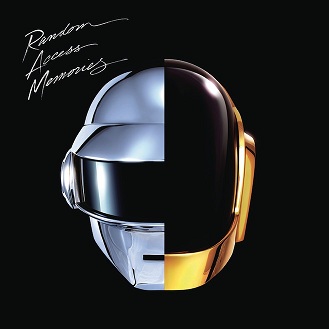 For most of its nearly hour and 15 minute length, Daft Punk’s “Random Access Memories,” sounds like a revolution. Despite the few moments the album doesn’t quite reach its soaring heights, Daft Punk’s record remains the most exciting and unique of the year. The duo, consisting of Frenchmen Guy-Manuel de Homem-Christo and Thomas Bangalter, turned their backs on the EDM scene they helped popularize with their albums “Homework” and “Discovery” (as well as the recent “Tron: Legacy” soundtrack). By collaborating with live musicians, Daft Punk has created a modern disco/dance record full of guitar grooves and synthesizers––all with an entirely new, yet somehow familiar, vibe.

The album, which delves into themes of what it means to be human in a robot-dominated age, includes a star-studded lineup of guests including Panda Bear, Julian Casablancas, Todd Edwards, DJ Falcon, Chilly Gonzales, Giorgio Moroder, Nile Rodgers, Paul Williams and Pharrell Williams.

The first track, “Give Life Back to Music,” opens with a swirl of guitars before diving into continually slick guitar riffs by Rodgers. Daft Punk’s classic robot voice sings, “Let the music of your life / Give life back to music” as if the robot longs to be truly alive. “The Game of Love” continues the theme of robot and human emotions colliding as the robot sings, “This is a game of love / And it was you / And it was you the one that would be breaking my heart.”

The next song, “Giorgio by Moroder,” is truly one of the highlights of the album. Famed disco producer Giorgio Moroder speaks during the first few minutes of the track over a classic disco guitar and beat about how he became involved in music, until he reaches a point where he begins speaking about putting a “click” on a track, and that it was the “sound of the future.” From there, the nine-minute epic breaks into a repetitive synth riff while a guitar is faintly heard in the background. After a jazzy and orchestral break in the middle, the track ends on an electrifying note with furious guitar and laser-like synths fighting for sound supremacy in a seemingly human versus robot battle. The intensity at the end of the track is somewhat reminiscent of Radiohead’s “Paranoid Android.”

On the slow piano ballad, “Within,” the robot pleads, “I’ve been, for some time, looking for someone / Fighting to know them / Please tell me who I am.” The appeal comes from a machine that seemingly cannot stand the thought of not being human.

One song later, Paul Williams delivers one of the most elegant vocal performances of the record on “Touch.” Williams sings softly through a vocoder before a lively jazz piano and horns kick in. Robots singing harmoniously of love collapse and give way to Williams tenderly singing, “Sweet touch / You’ve almost convinced me I’m real / I need something more” as if he and the robots are discovering how little difference there is between them.

The robots continue to try and distinguish if they are human through the remaining tracks until they discover in “Contact” that they and humans are nearly indistinguishable. With guitar sounds reminiscent of the opening track, the instrumental piece opens with past NASA mission recordings before exploding into synthesized madness, backed by volatile live drums. While all this is happening, a machine processing noise ramps up at an astonishing speed until the circuit breaks under pressure and an audible fizzle can be heard. It seems the robot could not handle the speed at which humans operate.

With “Random Access Memories,” Daft Punk has truly deconstructed the very empire it helped build—and in the process, built a new one. The duo has proven that they are not afraid of any challenge. Fans of the group’s older work should stand and take notice of this funky masterpiece. In this case, change should be welcomed with open arms. Whether you’re a human or robot, just listen and groove.