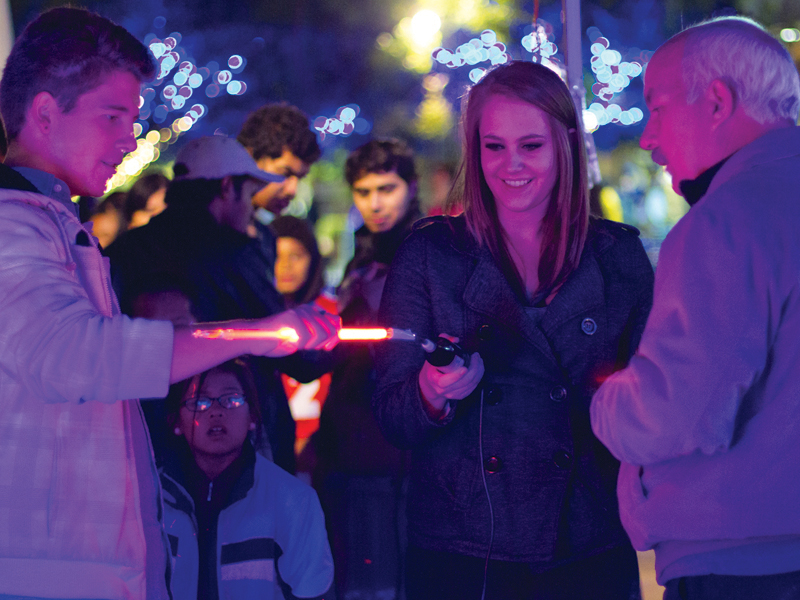 The day after the first rain of fall, downtown Riverside still had a chill in the air as lights sparked to life for the second annual Long Night of Arts and Innovation. Held in the Mission Inn square and surrounding streets, exhibits showcasing engineering, natural science, singing, dancing and more filled the area with an aura of intellectual stimulation for both sides of the brain — one that could only be attained by bringing together all of Riverside’s best minds in one place. Thus went the night, which lasted from 4 p.m. to midnight last Thursday evening, and impassioned scientific and artistic types alike.

Booths, table displays and stages lined the entire sidewalk street of Mission Inn Avenue, and even if one wanted to simply wander around, it was difficult not to be amazed. The California Baptist University engineering program had booths up and down the whole street with some of the most impressive and interesting displays of the night. A small white and orange robot, named Nao, adorned one of their tables as one of the most notable technology displays.

Nao, who the students said cost about as much as the average car, could understand vocal commands, recognize faces and featured touch sensors that recognized types of materials. But one of Nao’s most interesting aspects was his use in communicating with children who had autism, who would sometimes respond better to questions when prompted by a robot. The table was one of the most popular all night, with a swarm of children and adults alike looking at the unique little machine that was partially engineered by bright Riverside minds.

Another area featured the Moreno Valley Community College Gospel Singers, whose beautiful voices echoed around an old-fashioned car, a man on a Segway and dates grown at UCR’s Coachella Valley Agricultural Research Station. The blending of technology, naturally grown foods and performance art perfectly demonstrated how the night combined different sides of innovation and creative thinking — and how the community responded by fervently converging upon the space and enjoying free samples of UCR’s dates.

From UCR’s own College of Natural and Agricultural Sciences, tables promoting sustainability formed a loop, with one side speaking more on seismology and the other about global climate change. Various stations allowed kids to play games to see how certain colors retained more heat than others with a temperature gun. UCR students gladly explained all measures of sustainability to anyone who asked, and encouraged young and old alike to sign a green table cloth with their pledge to be sustainable. Even something as simple as “take shorter showers,” one of the most common responses, was encouraged to help save the Earth and keep the “going green” movement going forward. The genuine wish to help the Earth was ever-present throughout the booths, with community members trying their hand at all the different ideas of going green, almost in competition to try and see who could do better.

Patrons could tap into a another scientific side of their brain in a room set up by the UCR Physics and Astronomy department, where festival-goers eagerly tried contraptions designed to show how electrical charges and physics work in everyday lives. One of the most popular displays was set up near the back of the room, where anybody could grab a pair of 3D glasses and fly through galaxies and around the universe as stars seemingly came right for your head. The interactive nature of these exhibits evoked a sense of cooperation and learning in the room, as the students and professors in charge of the exhibits weren’t there just to teach, but to have fun showing off the cool things science can do.

At the Culver Center, histories, performances and presentations were eagerly attended by those seeking to engage with the humanities. Slideshow presentations on the history of oranges by UCR professor Tracy Kahn, and on Sherman Indian High School by UCR professor Clifford E. Trafzer, were informative and thought-provoking as the true stories came to life. UCR professor Tiffany Ana Lopez’s dramatic reading of former UCR chancellor Tomas Rivera’s novel, “And the Earth Did Not Devour Him,” had a crowd flocking to the small room on the second floor of the Culver Center as she brought all the characters to life. Lopez was accompanied by a slideshow of art pieces and photographs related to passages she was reading, bringing the audience alongside the characters on their journey. The audiences took full advantage of the events by asking questions throughout and after the presentations and performances.

The night came to a head with a couple of dance performances at the recently opened Box, a black box theater located on the upper level of Riverside’s historic Fox Theater. Two groups, Room to Dance and World to Dance, performed for about 15 minutes each. Going first, Room to Dance’s visually striking style blended colors, smooth movements, modern music and risky moves — I was almost hit in the front row as they twirled on one leg — to pull off a lively and invigorating performance. In between their larger group performances, two dancers pulled off equally impressive moves, as they juxtaposed stiff, robotic movements with a graceful style that allowed the two dancers to flow together as if they were one. The applause was deafening for both performances; the audience was impressed by the artistry and athletic gracefulness of the all the dancers.

After Room to Dance received a huge roar from the crowd, World to Dance came out with an equally stunning, if completely different, style of dancing and performance. A woman dressed in a flowing white skirt and wearing a bongo around her waist began by reading poetry. Slowly, as she hit the bongo and kept reading, other dancers joined her and started dancing and chanting. As the performance progressed, the beat got faster, until the ground shook from the dancers’ jumps. The woman with the bongo proclaimed, “Reach out rhythm! Reach out and extend your arms!”

When the performance was seemingly finished, a man in a white T-shirt and a “Cat in the Hat” hat walked out with a drum at his waist and a whistle in his mouth, which he used to lead all the dancers in a rousing drum beat. Other people from backstage, with more drums and percussion instruments, soon joined. What ensued was at least five minutes of controlled chaos and passion, intertwined and exclaimed through complex drumbeats that left the audience astounded and cheering loudly for the incredible display.

And this only scratches the surface of the festival. So many more displays of innovation in the arts and sciences — including machines built out of Legos, 3D printers and audio readings of stories from “Hunger and Resilience” — could not be included in this article or it would be the length of a short novel. What can be said for sure is that this is the kind of interaction Riverside needs. No matter one’s interest or age, there was something for everyone. The union of two very important types of thinkers made for an inspiring night full of passion from everyone involved. Art and innovation flourished throughout the night, and everyone attending, no matter the age or creative style, would not have had it any other way.