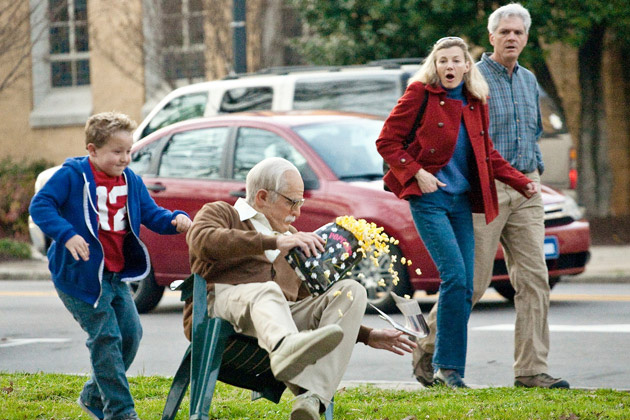 It seems the “Jackass” franchise is in constant pursuit of expanding its empire and outdoing itself in terms of crude, disgusting humor. In the film “Bad Grandpa,” Johnny Knoxville whips out old man prosthetics and turns himself into Irving Zisman, a raunchy and perverted 86-year-old character who has appeared in previous “Jackass” features. Instead of Bam Margera or Steve-O accompanying him in his pranks, Knoxville only has the help of Jackson Nicoll, an 8-year-old perfectly cast as the role of Knoxville’s grandson, Billy.

Compared to other “Jackass” films, “Bad Grandpa” actually has a plot. Newly widowed, Zisman travels from Nebraska to North Carolina to deliver his grandson to his father, and to properly dispose of his late wife’s remains (featuring a surprising cameo by Catherine Keener). However, the plot wasn’t necessary at all, and between the film’s constant skits and pranks, I forgot what their journey was about until the very end.

The “Jackass” crew once again tries to push the boundaries they have already set in their other films, and they do a decent job — thanks to Nicoll. He was funny and convincing as an abused child looking up to his grandfather as a role model; this is especially apparent in the foul  language he spurts while pretending to drink beer. But besides that, there weren’t any pranks that really pushed those boundaries. In fact, “Bad Grandpa” seemed tamer, with Knoxville only going through one glass window instead of 20 and using fake excrement instead of the real thing.

If it weren’t for the candid camera reactions, the film would not be nearly as good. The people’s reactions were what made this movie hilarious to watch, because while the pranks were funny, seeing the victims’ eyes bulge and mouths drop were the most hilarious. In most cases, the victims didn’t know what they’d witnessed. Some people felt sorry for the old geezer and some did not, such as the woman who threatened to call the police on him for stuffing bread in his pants and attempting to run out of the store. However, the audience never learns what happens to the victims after Knoxville has left the scene.

In one of the best skits, Nicoll dresses up as a girl to participate in a beauty pageant. His seemingly innocent participation mutates into an extremely sexual strip show. This is where Knoxville’s and Nicoll’s chemistry really shined. Nicoll began in an adorable sailor outfit, timidly dancing in front of the judges. The song then switches to “She’s My Cherry Pie,” and Nicoll strips down to a sexy bra and underwear, pole-dancing and shaking his behind. Knoxville comes on stage and throws dollar bills at him; the camera switches between appalled mothers covering their daughters’ eyes and the equally appalled judges. However, we never actually hear a reaction out of them, and while it was funny, it would have been nice to see how the show turned out because Knoxville obviously tried to go all-out with this final prank.

Fortunately, Knoxville relieves that disappointment in the ending credits when he shows footage of him revealing his intentions to everyone. Watching innocent bystanders’ faces when they realized they were in the middle of a huge prank was satisfying; the only thing that’s better than seeing the setup of the joke is enjoying the eventual reveal.

While “Bad Grandpa” is one of the tamer titles in the “Jackass” franchise, that didn’t stop it from being any less funny. From stripping down to his underwear in a male strip club to sexually penetrating a soda machine, it’s amazing that this movie kept an R-rating. And despite its shortcomings, Knoxville kept the crude humor going. If you’re feeling weary of Knoxville’s usual tactics, at least go for Nicoll’s performance, because nothing’s more adorable than seeing an 8-year-old kid play an 86-year-old’s wingman.