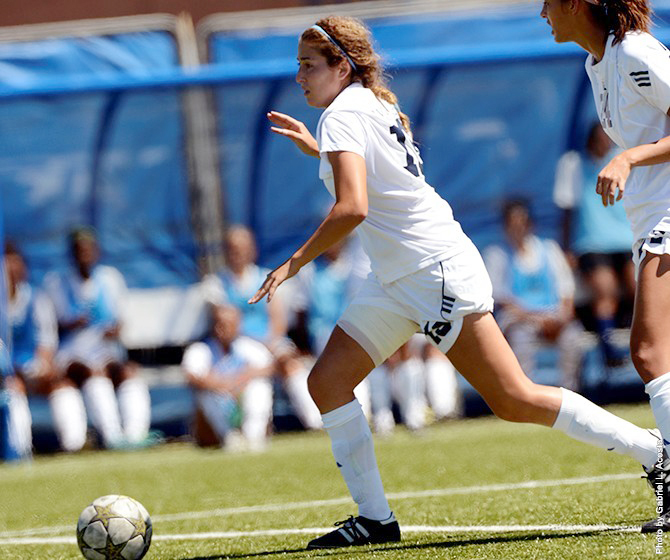 In a showdown of the top two teams in the Big West Conference, top-ranked Cal Poly San Luis Obispo played host to the visiting second-place Highlanders on Oct. 20. In what was expected to be a closely contested match, Cal Poly effectively demonstrated their superiority in this statement game.

In the first half, each team shot three times with inverse results, as the Highlanders couldn’t get a shot past the herd of Mustang defenders. On the other side of the pitch, the Mustangs unleashed a stampede of three goals in a span of eight minutes to practically end the game before halftime. Megan Abutin, Kendra Bonsall, and Elise Kreighoff all tallied points for Cal Poly and it seemed the halftime whistle couldn’t blow quickly enough for UCR as they trailed, 3-0.

After halftime, the Highlanders were able to regain their composure and outshot the Mustangs 10-4 for the period. Despite being unable to recover from the big deficit, UC Riverside was able to outscore Cal Poly in the second half on the strength of Sammy Arellano’s third goal of the season. Though goals have not come easy for Mustang opponents this season, Arellano’s strike broke up goalkeeper Alyssa Giannetti’s bid for a team-record seventh shutout.

The Mustangs of the Big West are starting to pull away from the rest of the pack. Much of their conference success can be attributed to Kreighoff, whose score in the first half brought her to 18 goals for the season. Kreighoff is tied with Jannelle Flaws of Illinois for first place in total goals scored in the whole nation.

On Thursday night, the UCR women’s soccer team returned home looking for much-needed victories in hopes of qualifying for Big West postseason play. With just two conference games left on schedule, a raucous and energized crowd showed up to support the Highlanders on a chilly evening.

Under the bright lights and big stage, UCR asserted its physicality from the get-go and played with noticeable determination. Eighteen minutes into the match, the possession dominance paid off as Celina Valencia unleashed a beautiful right corner kick into the goal box, 1-0. A precisely executed header by Alexa Bustamante completed Valencia’s assist and brought the crowd to their feet in loud appreciation.

It seemed like the Highlanders had all the momentum when just a few minutes later, UCR forward Tyler Cunningham powered through a helpless Aggie defender and nimbly sidestepped keeper Taylor Jern to find herself staring at a wide open net. Although Cunningham was clear of all defenders, she rushed her shot and inexplicably pushed this golden opportunity slightly wide to the left. To their credit, the team seemed somehow unfazed by this shocking miss and the pained reactions of the crowd. To exacerbate matters, an almost identical situation presented itself in the early moments of the second half that culminated in a painfully similar result.

The Aggies put together four consecutive passes in one sequence to set up Kiele Argente for the game-tying goal, which evened the score at one apiece. With just seven minutes left in the second half, the speedy Lexi Popoff took advantage of a Highlander defensive error to slip a shot past keeper Elizabeth Silas for what proved to be the game-winner, 2-1.

Aside from point scorers Valencia and Bustamante, midfielder Amber Marani provided a steady force all over the field with well-timed tackling and accurate passing. Another UCR standout was substitute Andrea Morales who brought a different level of intensity to the field as she constantly used her strength to wear down opponents and push them off the ball.

The Highlanders remain in Riverside to play a non-conference game against Montana on Friday, Nov. 1.