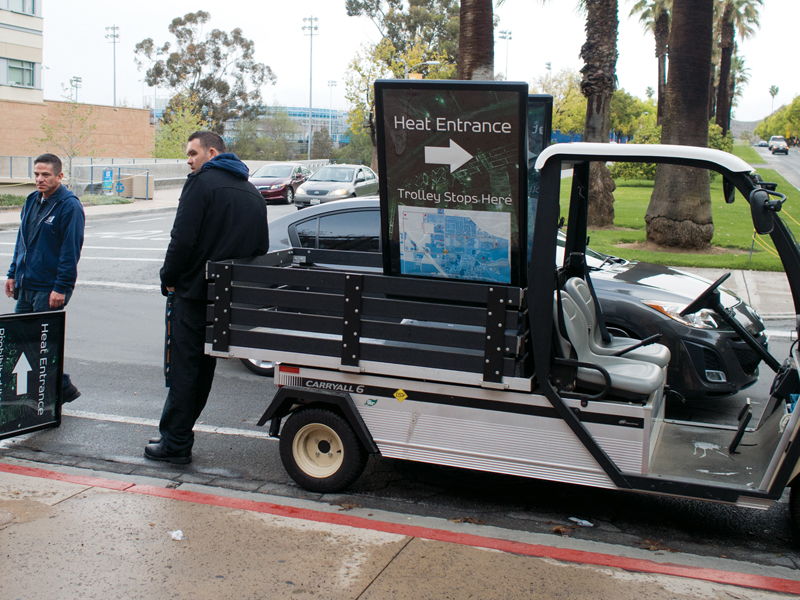 Our phones chimed en route to campus on the I-15. It was the text that killed the plans of what would have been 12,000 attendees at Heat: “Heat Concert Cancelled,” from the campus alert system, received at 4:19 p.m. We stared at our phones for a long moment, considering the jokes we’d made earlier that day — what if the fields in the center of campus were thrashed into mud by the pounding feet of so many students? What if Ciara had her baby? What if Heat was cancelled?

The official report is that Heat was called off by Environmental Health and Safety, the Highlander Union Building (HUB) and UC Police Department due to impending weather conditions — including a flash flood warning — from the central California coast moving inland. The notice arrived too late to prevent the arrival of students and residents from surrounding cities, traveling from the Inland Empire and beyond, eager to experience the rush of Madeon, the grooves of the Neighbourhood and of course — Childish Gambino.

We arrived as the campus emptied. Penske moving trucks drove through the metal gates that had once been intended to direct students inward; throughout the heart of campus, event staff packed away the fiery effigy and metal art installations that would have warmed the HUB plaza. Phones were out, taking photos of the blue-gray sky. For the next few hours, Twitter, Instagram and Facebook would update with closeups of pink and green Heat tickets. The focal point of these photos: A single line of text toward the bottom of the ticket. It read, “Rain or shine.”

“The cancellation is unfortunate,” explained Rich Holtzman, general manager of Portugal. The Man, in an email. “Everyone was bummed out. Right now we do not know what the next step is. As it just happened, we have to regroup and decide.” But for Portugal and the other headliners, returning to UCR this academic year is out of the question; this upcoming weekend is Discover Day, and the next precedes finals week. Madeon tweeted, “Super disappointed Heat Music Festival got cancelled because of the weather, sorry everyone!” Ciara, in an Instagram video to her fans, said, “I am so bummed the show got cancelled due to the storms, so the only right thing is to send you guys my love and tell everyone to get home safely. Love you guys. Peace.”

No word from Gambino as of publication, but given students reported seeing him prowling around GameStop at the University Village Saturday afternoon, maybe he ventured out into Riverside and battled the cold, wet weather with a hot bowl of pho.

Freshman pre-business major Alexa Paredes said, “I was looking forward to seeing all of the performers, especially Childish Gambino. I’m not that upset though because I’m going to see him this Monday at SDSU. Hopefully it’s not raining.”

Other students were less fortunate, including freshman creative writing major Jordan Mayo, who said, “We think it really freaking sucks that this is cancelled because it’s probably the main reason why — I don’t know, I thought it was the main thing I was going to enjoy this year at UCR.”

Mayo’s sentiment was shared throughout the throngs of attendees migrating away from the black signs out front of the main Heat entrance, which said “Cancelled due to severe weather” under a thin layer of dampness. The torn half of a green affiliate ticket sat crumpled on the grass, ripped in frustration by any of the countless residents who had purchased scalped tickets as recently as a half hour before the concert had been cancelled. UCR’s Facebook confirmed that affiliate tickets would be reimbursed via the email used to purchase the ticket — useless news to fans who had paid upward of $150 to unofficial sellers to see the headliners.

That night, we tried to find Vicky Garza, Programs Manager at the HUB, as equipment was put away in anticipation of the forecasted storm. Event staff shook their heads, saying, “She’s probably really busy right now. We all are.” And we didn’t blame them. As the irate comments on the Heat and UCR Facebook pages illustrate, students wanted answers about refunds and the gall of the HUB to cancel something so integral to the campus community.

In response to a Highlander inquiry, lead student programmer and ASUCR executive vice president Armando Saldana said, “Refunds will be made to students who bought tickets. There are no plans for rescheduling. The event is completely cancelled for this academic school year.”

And though we were just as disappointed as everyone else, the only entity who truly deserved blame was Mother Nature. Blue skies and a severe lack of rain were readily apparent at points throughout the night, but the possibility — and unpredictability — of thunder clouds and lightning left event organizers with no other choice than to cancel the event. Despite prior measures being taken by the HUB to protect the event against light to moderate rain, holding the event during a forecasted storm, or flood, or thunder, was a risk that just couldn’t be taken.

As we gathered ourselves and prepared to exit, we walked behind the Physical Education building to find clumps of people huddling around three large, gray crew busses. Students in thick jackets and muddy boots stared, standing a respectful distance away, unsure whether a few of the headliners were also hanging out in the buses in the middle of Lot 19. A man in a black T-shirt — likely a crew member — flashed a “peace” sign through a window, and the crowd rumbled like thunder. Not even the arrival of two police cars, seeking to push the crowd away, could stifle the lingering hopes of these hangers-on to get at least something from their night of what could have been Heat. A crew member stepped down from the bus and immediately the crowd surged, pulsing around him in a frantic grab for photos and signatures and some sort of memory.

When we found Garza, she was surrounded by a throng of student event staff at the road between the campus bookstore and Surge. She spoke into a walkie-talkie and directed her staff, brusque and fast-paced, moving equipment away from the threat of the oncoming storm. In the middle of the rush and rumble and steadily graying skies, Garza looked as disappointed as we felt. We asked about whether Heat would be postponed or outright cancelled. Garza nodded to herself and looked toward an approaching truck. “Cancelled,” she said, with a heavy tone of finality, both to herself and us.

We left campus in an air of dampness and dejection, right as the skies opened and the rain finally began to fall. Throughout Riverside, students and would-be attendees gathered at Getaway, at local spots downtown, at the Student Recreation Center (SRC) for what would become a double-overtime win for our men’s team. As the floors of the SRC rumbled under the weight of celebration, and pitchers were filled to the brim with frosty adult beverages, we settled into a booth at D-Dogs and observed what must have easily been one of the busiest nights we’ve ever witnessed at the restaurant. And in that way, at least, Riverside moves on — despite the disappointment, and despite the wetness of the roads throughout the city, we sat with our glasses and toasted the memory of Heat — and the oncoming splash of spring.