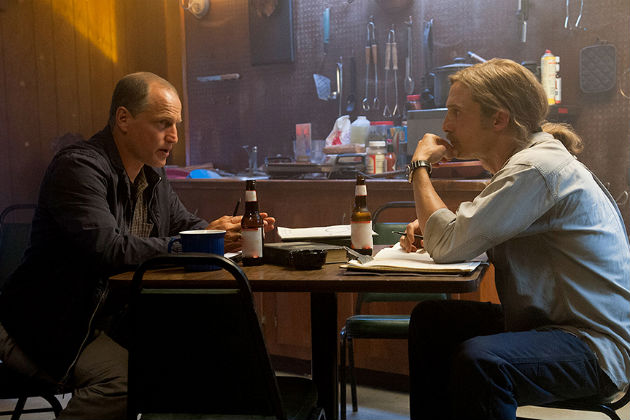 With only one episode left of “True Detective,” I’m still racking my brain as to how everything is going to come together. The murderer from the Dora Lange case is still on the loose and even more has been revealed involving King Carcosa’s religious cult’s involvement in both the police department and super church. Our two detectives are back together in present-day 2012 following Rusty Cohle’s lead. It’s just a matter of time before everything finally becomes unraveled with either joyous or ruinous consequences for Cohle and Hart.

The show’s structure has made a very pleasing shift. Gone are the interviews and jumps into the past. While both Cohle and Hart haven’t seen each other in eight years, things quickly pick up when Cohle recruits Hart to aid him in his hunt. Hart asks Cohle why he would ever help and Cohle only needs one line: “Because you have a debt.” The episode does great work of not wasting any time with their reunion and puts them to work in Cohle’s storage rental. It resembles an altar more than anything. His religion is the murder case, and his savior is the elusive man with scars on his face.

My largest problem with the last episode is how slow things have been moving, and sadly things haven’t changed since last week. Not much more has been revealed about the case except that Reverend Tuttle is indeed behind many of the kidnappings and rapes that have plagued the season. There is a big lack of conflict in this reveal when we also learn that Tuttle is dead. The detectives begin connecting dots and get closer and closer to the man with scars, beginning to see how demented things have become in this hidden religion. They interview a geriatric woman who struggles to make sentences, but once they show her photos of the pagan bird cages she screams, “Rejoice, Carcosa, rejoice!” This scene shows how deeply Carcosa’s religion has affected so many people throughout the many parishes of Louisiana, and just how connected the worlds along the bayou are.

The highlight of the episode was watching the two detectives pick up right where they left off. The viewer assumes the men would only harbor deep grudges for each other after they took turns turning each other’s faces into bloody mashed potatoes, but Hart and Cohle work day and night downing bottles of beer and Jameson attempting to connect all the pieces of this puzzle — but all feuds aside, they will stop at nothing to solve the case. Near the end of the episode they discover the links between a certain sheriff’s office and the murders. Hart takes the sheriff out fishing, only to let Cohle step out with a gun on the sheriff before the scene ends. With this, we see just how badly these detectives want all the murders, rapes and abductions of innocent girls to end. We have reached the hinge of the entire season and see that they will stop at nothing, regardless even of their own lives, to get to the bottom of all the depravity.

The last scene is the most enthralling of a single one yet. Detectives Potts and Kittles, the two officers that were interviewing both Hart and Cohle, are in the back end of the bayou and come across a man mowing lawns near hundreds of coffins. They ask for directions, and in the shade the man tells them where to go. The camera pans out and we see the landscaper in full light and, more importantly, we see the scars that cover his face. For the first time this season we see who is behind it all. Now, it is only a matter of time before Hart and Cohle catch up with us. I just hope that they do it soon.