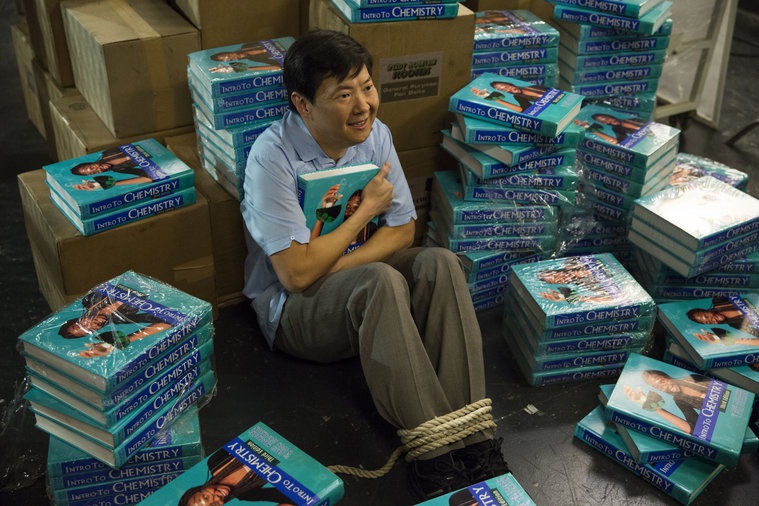 By far, the best part of “VCR Maintenance and Educational Publishing” was the Annie (Alison Brie) and Abed (Danny Pudi) plotline. With Troy gone, Annie and Abed are in need of a roommate to pay the rest of the rent. Annie wants her brother, Anthony (Spencer Crittenden), to move in while Abed wants his girlfriend, Rachel (Brie Larsen) — yes, she is back, and I am excited — to move in.

Annie and Abed don’t often team up for plotlines, and I’m not sure why that is. I mean, part of it is probably Abed’s close friendship with Troy, but with Troy gone, I’d like to see the Abed and Annie dynamic more since Brie and Pudi interact so well. Remember season one’s “Social Psychology” when Abed stayed during Annie’s psychology mind experiment solely because he felt they were friends?

The two also play off each other in this episode. Abed and Annie’s disagreement over which person should move in with them evolves into a full-scale rivalry over the VHS-based game “Pile of Bullets.” They make a pact — whoever wins the game can choose their new roommate.

Abed and Annie’s attempt at a handshake and eventual synchronicity, all while making sure to follow everything single ridiculous rule in “Pile of Bullets” — including spinning in a circle when a cyclone appears onscreen — were some great moments of physical comedy. When they both get too vested in the game, it drives Anthony and Rachel away, and neither one of them end up moving in. Anthony tells Annie that Troy’s absence is clearly still affecting her and Abed, and it’s good to know — even though it doesn’t really go anywhere this episode — that Troy is not forgotten.

The other plotline involved the rest of the Save Greendale Committee except for Duncan, who didn’t appear in the episode. Shirley (Yvette Nicole Brown), Jeff (Joel McHale) and Hickey (Jonathan Banks) find a bunch of chemistry textbooks they thought were worth a lot of money in a storage room at Greendale. In a surprise twist, after initially forcing Shirley to go along with their plan to sell the textbooks on the down-low, Jeff and Hickey are at a loss when Shirley becomes the mastermind.

Like I mentioned in last week’s review, I really like it when we get to see Shirley’s darker side, so this was easily my favorite part of the plotline. Based on the fact that the creator of “Breaking Bad,” Vince Gilligan, had a cameo in this episode, I’d like to think this switch between nice Shirley and dark Shirley was meant to call out “Breaking Bad,” especially since the group was using chemistry textbooks.

Britta (Gillian Jacobs) and Chang (Ken Jeong) are involved in the plot as the person who knows a potential buyer and as an innocent bystander, respectively. The plan to sell the textbooks just went downhill from there, ending up with Shirley tying everyone up — which became a really great sight gag, and one of the better jokes from this plotline.

Of course, in the end, the textbooks turn out to be misprints. I was actually pretty sure something like that was going to happen from the start, so the fact that it did happen was disappointing. However, I did laugh at the fact that the misprint was that the books had no page numbers because I wasn’t expecting that specifically, and it was just on the borderline between ridiculous and funny that “Community” usually traverses so well.

The main problem with the textbooks plot, however, was that I wanted it to matter to these characters, and to affect their lives in some way, like Abed and Annie’s plot affected them. And failing that, since I understand that not every plotline on a sitcom can have some grand meaning, I wanted it to be funny. Instead, it felt like dead air, a way to shoehorn the characters into doing something just for the sake of doing something to counterbalance the other plot.

I actually enjoyed “VCR Maintenance and Educational Publishing” a lot, but looking back, most of that enjoyment came from the Annie and Abed plotline rather than the secondary plot. Of course I’d rather enjoy the entire “Community” episode than only part of it, but if that can’t happen every week, I’ll take liking half any episode over nothing.