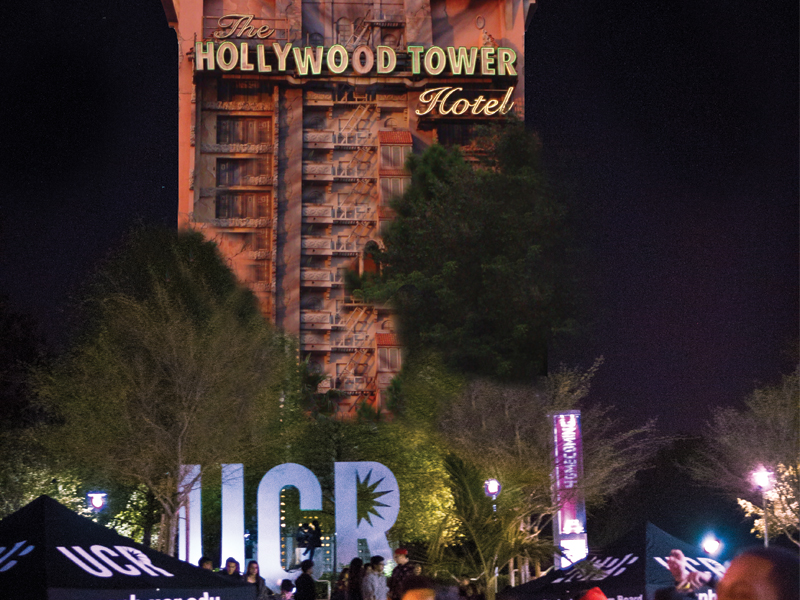 Have you ever jolted yourself awake in the dead of night and muttered, “What if I don’t pass the final?” Or have you ever got the sweats with the thought of the senior thesis? Now, what if the “imagineers” of Disney took all those fears and used their magic to create a proper nightmare just for UCR? Don’t bother reaching for a paper bag to hyperventilate — it’s too late. Over spring break, while students tried to avoid waking up at 7 a.m., Disney collaborated with UCR officials to create UCR’s first-ever ride: the Bell Tower of Terror. That’s right, the 48-year-old eyesore in the middle of campus was transformed into a 161-foot free-fall ride, dropping at the speed of 60 mph. Take a journey with Chancellor Kim Wilcox as guests ride the terror of every student. The Bell Tower of Terror: the most thrilling ride UCR has been on.

The Bell Tower of Terror was born on Mar. 24, 2014 after eight years of planning. Plans and funds were kept hush-hush from students as UC board members wanted to keep it a surprise for UCR. Instead of remodeling the restrooms in the Rivera Library, however, funds were given to Disney to transform the boring landmark into a permanent ride.

The Bell Tower (a gift from former UC regent Philip Boyd in 1966) previously held 48 bells at 161 feet, with stairs leading to the peak. Disney then hollowed it out and put in a gondola type of car that shoots upward. Some bells were removed so that the car could gain access to the highest part, and, to see all of UCR, windows were cut out to peer out over the campus. UCR looks even smaller when sprung up in the air.

The line for riders is strung across the grass between the Rivera Library and Watkins. Mickey Mouse’s theme song from the 1928’s “Steamboat Willie” episode whistles over waiting guests, transporting them to the past. However, upon entering the ride, the chipper tune turns into the whistle of wind from a stormy night. At the head of the line stands a man in a pantsuit that looked like it was borrowed from Walt Disney himself, wearing the same eyeglasses as the hipsters in line. The professor-looking man stands at a podium, allowing up to 15 riders to enter. The door opens to reveal a replica of one of the scariest places on campus: Watkins 1000. Leave it to Disney to replicate the lecture hall down to the stain on the seats that all students hope is from drool.

Once strapped into the chair, the professor from outside comes in. Instead of a lecture, he instructs to hang onto all loose items “such as books, bags, hopes and dreams.” He leaves the class with a good luck and, with the slam of the door, the lights go out. For Watkins 1000, the loss of lights is not a surprise. But chills roll down spines from either the broken heater or from the flickering projector that reads “O-CHEM 1966.” Chancellor Wilcox’s voice is heard from above as he tells the story of five students from 1966 who were just like the ones in this class. Hands grip the desk in front of them as the car moves upward and the projector slides down to reveal a black-and-white image of five students sitting directly in front of them. Go-go boots tap with frustration and hands clench the slicked back hair as they take an exam. Wilcox continues his story of the five who struggle with their final. Suddenly, the car moves even higher with the song “Almost There,” from the Disney movie “The Princess and the Frog.” The car stops with a distorted film of the graduating class of 1966. While the five from the class make their way to reach their diploma, the song continues: “Trials and tribulations, I’ve had my share / there ain’t nothin’ gonna stop me now ‘cause I’m almost — ” but before the song can finish or diplomas are in their grasp, the car drops.

Gut in the throat and butt in the air, the students fall to maniacal laugh of Ursula from “The Little Mermaid.” The car then bounces to a stop as Wilcox explains how the five now haunt the UCR campus in an eternal search for their diploma. As the car flies upward, ghosts of the students creep out of the corners of the Bell Tower. Students stretch as far back as they can before those go-go boots get any closer. The car stops with the view of the UCR campus as the students peer out from what was once the clock. “Oohs” and “awws” turn into shrieks as they drop to the sound of the clock’s strike. Pummeling down, anxiety reaches a new level as exams and scantrons fly across the screen to the stress-inducing orchestra set of “Clock Strikes Midnight” from “Cinderella.” Feet can’t even reach the ground before students shoot upward. The car pauses. Nothing but the eighth chime and the taste of Panda Express coming up for seconds joins the disturbing long pause at the highest point. Instead of the 12th chime, though, Elsa from “Frozen” serenades our drop as we literally “Let It Go.” The car jolts to a stop as Wilcox warns the students that, “Next time you take a test, know that haunting UCR is always a backup plan.”

The Bell Tower is no longer just a meeting point for friends, but also to meet some … special students as well. The Bell Tower of Terror is sure to bring new excitement and nightmares to spring quarter 2014.