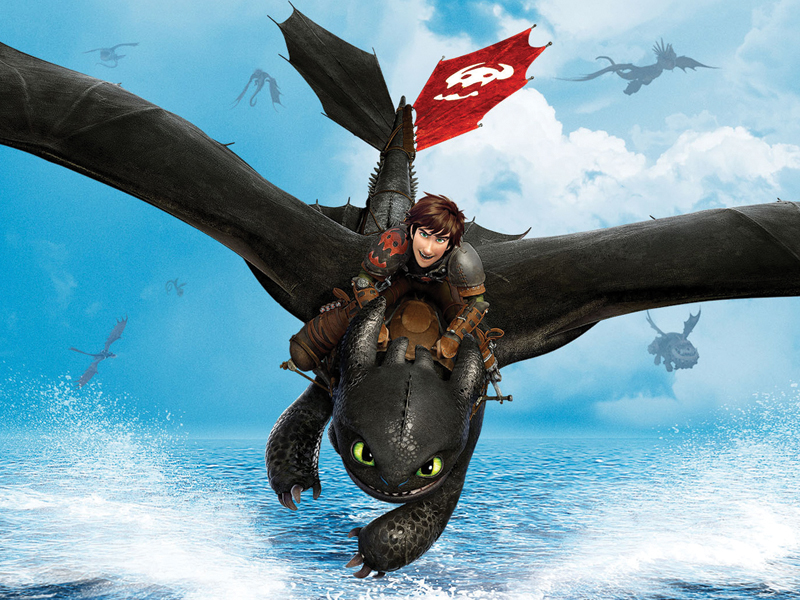 DreamWorks Animation is hit-or-miss with the majority of its films. For every “Shrek” that has come out of the studio, there seems to be a “Turbo” that just reminds you how thankful you are that Pixar continues to make truly fantastic films. It’s fortunate then that Dean DeBlois, half the directorial team of “How to Train Your Dragon” returned to bring audiences the aptly named sequel, “How to Train Your Dragon 2.”

“How to Train Your Dragon 2” picks up where the original film left off, making the already cool concept of a viking village even better by adding dragons and letting the vikings ride them. Hiccup (Jay Baruchel) is accompanied by his faithful dragon Toothless who, as always, appears more like a reptilian dog who has the power to shoot balls of purple fire. The two endeavor to create a map and find more lands using their abilities as dragon and dragon-rider to hop from one island to the next (as vikings are wont to do). From there, the story becomes about Hiccup taking over as a leader for his father Stoick (Gerard Butler), and having to face off against the newcomer Drago (Djimon Hounsou) and his army of enslaved dragons.

The plot isn’t anything worth writing home about, and most of the twists and turns were spoiled by the trailers for the movie. There are a few moments in the movie involving Hiccup’s family that may manage to raise an eyebrow of morbid surprise, but if you’ve ever seen a movie for children before, you’ll be far from shocked by most of the curveballs the movie tries to throw your way. While this is sometimes excusable for a sequel to play it safe, many of the subplots in the film go as far to be blatantly recycled from the first film, including Hiccup’s friction with his viking-chief father and feelings that he is too different from his village.

The voice acting in “How to Train Your Dragon 2” is — thankfully so — the saving grace to a film that would be otherwise so by the numbers that it could have been released straight to video. Baruchel and the rest of the main cast manage to do a fine job selling the audience on the gravity of an impending war with a dragon-trapping army, and the scenes where characters lament losses they suffered are genuinely moving. That said, the moments of levity, like Hiccup’s scenes with his girlfriend Astrid (America Ferrera) are surprisingly cheesy enough that they would go well with a box of crackers, causing me to wonder whether it was a consequence of hammy writing or acting. Sometimes, the cheesy acting even come off as intentional, making romances between characters believably awkward and jokes measurably more enjoyable, translating how much fun the actors had while making them.

As the title suggests, the dragons in the film provide a huge amount of the movie’s entertaining qualities. Toothless and the other dragons often seem like domesticated cats and dogs, moving around and acting in ways that remind the audience of their pets at home. Toothless regularly rolls over onto his back, inviting a rub from Hiccup, and there are references to pack animal characteristics that are actually quite interesting for a movie that otherwise plays it very safe while also opening up the film for various sight-gags.

Like any animated film however, the strongest aspect of “How to Train Your Dragon 2” is the quality of its animation. The computer animation in the film seems to be up to a standard that even Pixar would be hard-pressed to outdo. Textures of hair, water and even people’s clothes are astounding. Character movements are natural and smooth, allowing the audience to sit back and enjoy the spectacle of computerized settings and people. Additionally, the exaggerated and cartoony proportions of the character models prevent the distracting effects of the uncanny valley that CG films regularly suffer from.

“How to Train Your Dragon 2” is, ultimately, a fun film and as long as audiences aren’t over-familiar with the tropes of children’s movies and the ways in which those plots develop, there is no end of enjoyment to be had. If you’re looking for something enjoyably simple that will give you an hour and a half to turn your brain off, then this is the perfect movie to go see.