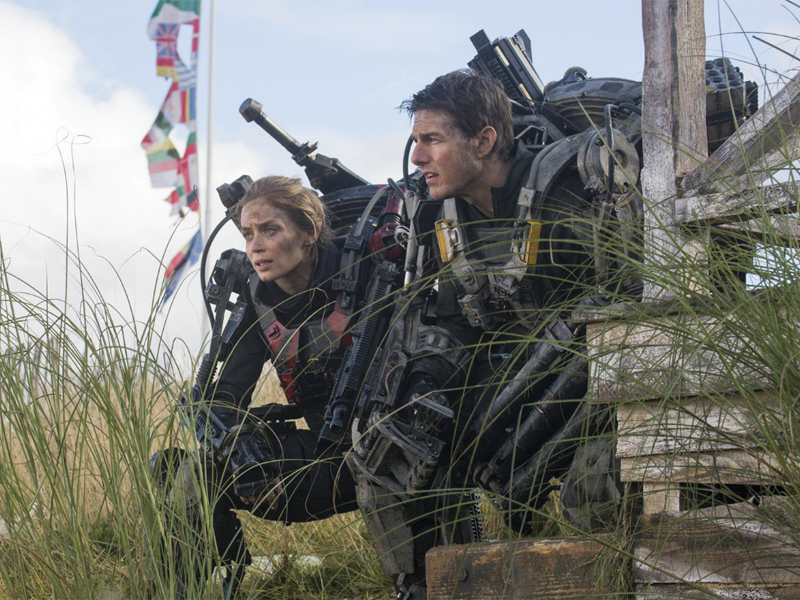 Summer is here and that means that cinemas are filled with more explosions and gunfire than usual. The interesting subject of time travel warmed things up at the box office. First it was “X-Men: Days of Future Past” and now we get “Edge of Tomorrow.”

The film is based on Hiroshi Sakurazaka’s manga and novel “All You Need Is Kill” and follows Major William Cage (Tom Cruise), who finds himself in a time loop when he acquires the power to “reset the day.” Through death, Cage has the power to return back to the day before he hits the frontlines in a massive D-Day style invasion. He must use his power to win a war with an alien race but finds himself having to go through thousands of combat scenarios to do so.

The film uses time travel in a rather unique way — it’s like a reset button on a gaming console. Cage is a player who has reached a checkpoint, and whenever he dies he returns back to that checkpoint, but the sequence is still the same. He then keeps dying until he carefully maps out his path throughout the level, so that he can pass it. Although this may seem boring to watch, the film tackles the same situation from multiple angles, allowing the audience to see multiple facets of the film.

When Cage finds out that he needs to talk to Rita (Emily Blunt), he hits the “reset button” continuously to devise a plan to escape the clutches of Master Sergeant Farell (Bill Paxton). Cage goes from accidentally rolling under a military jeep during a scheduled training exercise to being struck by moving targets as he tries to maneuver his way through a target range to get to Rita. Sequences like these provide for multiple moments of comedic relief. But, as soon as we get to love our heroes, the audience feels a sense of sadness when we find out that the death of one of the characters is a scripted sequence created by destiny that can’t be avoided.

Cruise manages to play a fantastic role, although he is out of his element for most of the film. Cage does not start the film off as a badass — he’s a civilian who has never picked up a gun in his lifetime and is thrust onto the frontlines. His ineptness in battle is something the audience can relate to, and we watch as he turns from a character who doesn’t even know how to work the safety on a gun to a seasoned warrior who doesn’t even need a helmet in battle. Blunt also plays a character out of her usual role, but still manages to deliver a powerful performance. Rita goes from living up to her nickname of the “The Full Metal Bitch,” leaving her fellow comrades to die, to a sentimental mentor for Cage and eventually a love interest.

However, the film isn’t without flaws. Its unique take on time travel is both a blessing and a curse. Without a doubt, 15 to 20 minutes of filler could have been shaved off of the film’s initial 113-minute runtime. The film relies so heavily on montages of Cage dying that it deviates from the main storyline. Why do we need to see so many instances of Cage training and dying because he is injured? Why do we need to see so many shots of him constantly dying on the battlefield? These instances are kind of entertaining, but they run a little over their course and the film could get on with the main plot quicker.

With all of that said, “Edge Of Tomorrow” is definitely a unique experience. Its blend of creativity and basic movie essentials puts it above most summer blockbusters. Although the movie does run pretty long for what it is, it is entertaining nonetheless and will definitely keep viewers interested.