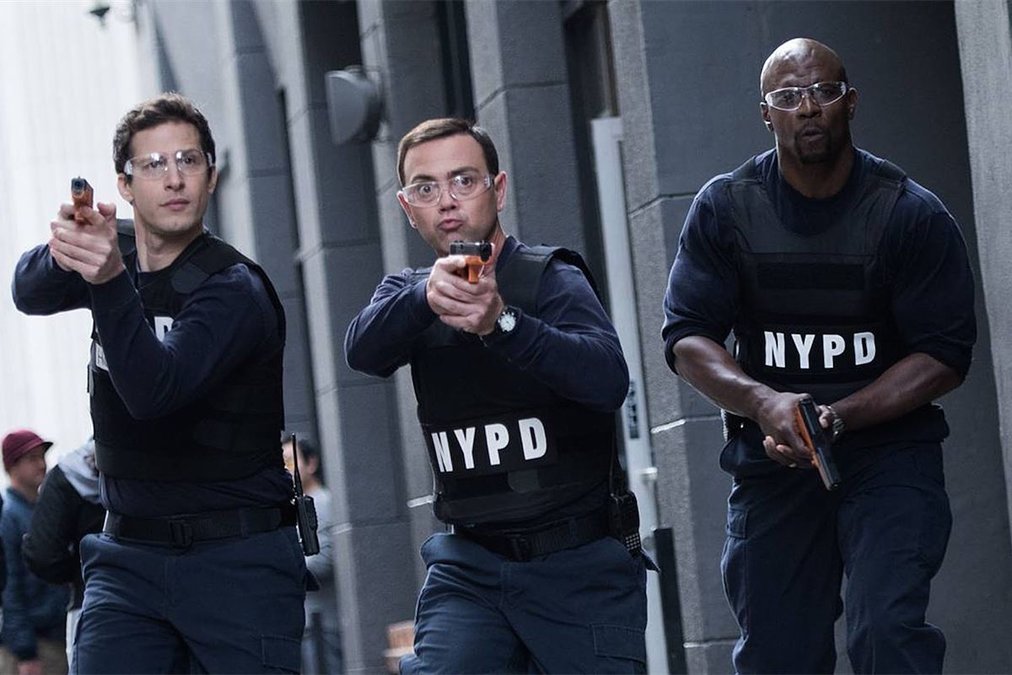 Even though “Brooklyn Nine-Nine” is a show that can do over-the-top comedy (i.e. “Halloween II”), it still knows how to take a step back and breathe. The episodes of this half of season two have focused more on character than on comedy alone, but the show has often found trouble combining its elements — character-driven episodes often lose focus on the workplace aspect of the show and vice-versa. “Windbreaker City,” however, finally manages to bridge the workplace and character in a strong episode for a season that has unfortunately been hit-or-miss.

“Windbreaker City” picks up after Jake (Andy Samberg) and Sophia’s (Eva Longoria) breakup from the last episode and finds Jake mourning and obsessively checking his phone to see if Sophia has texted him. Although I knew that this episode would deal with the breakup because of its summary, I was surprised but pleased to see Jake was dealing with the situation. “Brooklyn Nine-Nine” has never been shy about discussing its characters’ feelings, which is a credit to the show, but Jake feels like the kind of character who would insist that everything was fine for a while before realizing it wasn’t.

Regardless, the episode plays through Jake’s post-breakup sadness by having Terry (Terry Crews) and Boyle (Joe Lo Truglio) convince him he needs to “cathart” (catharsis as a verb). What they have in mind is participation in a counter-terrorism drill, which initially seems to recall season one’s “Tactical Village” when the precinct competed in similar drills and simulations. Here, the members of the precinct are once again underdogs, but in “Windbreaker City,” it’s because the other teams are from government agencies, including Homeland Security. As such — and because Jake annoyed the man in charge, Agent Kendrick (Nick Kroll) — the precinct is assigned the role of hostages.

Again, the similarities to “Tactical Village” are clear when Jake rallies the precinct to come together and “win” the drill by killing all the government agents. However, “Windbreaker City” wisely combines this need to win with Jake’s need for catharsis. Essentially, Jake uses the drill to distract him from the fact that Sophia still hasn’t texted him back. It’s a neat way for the show to have its cake and eat it too as the combined plotlines allow for character and emotional plot in addition to the fun of seeing the precinct take out a bunch of snotty government agents with paintball guns.

There is a lot of good, funny stuff in the precinct taking over the counter-terrorism drill, including Amy (Melissa Fumero) and Rosa’s (Stephanie Beatriz) body count competition, but it doesn’t take up the entire episode. In fact, some of my favorite scenes are after the drill is over. The first of these is Rosa telling Amy that she fought so hard to get the day off because she wanted to introduce Marcus (Nick Cannon) to her parents.

Now, this scene definitely would have played better if we’d seen Marcus sometime between this episode and his brief appearance in “Beach House,” three episodes ago. But the novelty of Rosa having feelings hasn’t quite worn off yet, particularly when she gets such great lines as, “It’s very embarrassing having feelings.”

The second of these post-drill scenes and my favorite one of the night is between Jake and Sophia. Part of the reason I like this scene probably has to do with my surprise and pleasure at seeing Sophia in the episode, but the scene itself is bittersweet. Even though Jake jokingly proclaimed them “enemies for life,” it is clear that the two have feelings for each other that they aren’t quite over, especially Jake, who wanted Sophia to turn back and look at him as she walked away. Right now, I’m not sure if Sophia will be back, but if not, this scene was a good note to end on.

Even in its one subplot, “Windbreaker City” felt like a callback to “Tactical Village” because that plot paired Gina (Chelsea Peretti) and Holt (Andre Braugher). While everyone else is away from the office, Gina asks Holt to take a personality test for her psychology class. Although the plot is largely positioned as comic relief and a break from the action-heavy counter-terrorism drill, it still holds its own — though not quite the way Holt’s addiction to Kwazy Kupcakes did in “Tactical Village.”

Since it helps to define her character, I appreciate the reminder that Gina is taking college courses, but the most mileage comes from Holt’s displeasure that he and Gina were sorted into the same personality category, I9C3G6. It becomes clear over the course of the episode that even though they don’t act alike, Holt and Gina are evenly matched. When Holt tries to get Gina to change some of her answers to move her out of I9C3G6, she calls him on it and acts offended. Holt eventually apologizes, but he’s not beaten, as he gives Gina more work responsibilities in light of her high potential.

With the Sophia plot seemingly over and Rosa introducing Marcus to her parents, “Windbreaker City” moves “Brooklyn Nine-Nine” into position for its final third of the season. Most of the post-winter hiatus episodes have been good so I’ve enjoyed this part of the season better than its beginning, but now is the time to introduce the new plots we’ll be following for the rest of season two. Hopefully “Brooklyn Nine-Nine” can keep the ball rolling.