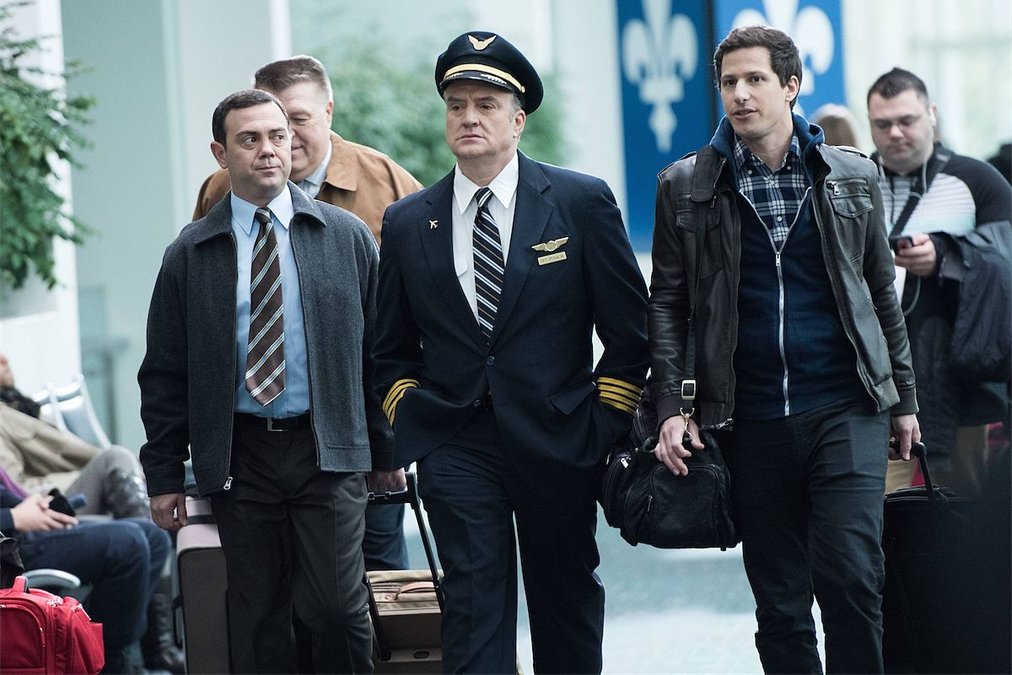 There were a lot of elements in the latest episode of “Brooklyn Nine-Nine” that I should have liked, including French jokes, brainteasers, Bradley Whitford and use of all the members of the core cast. But “Captain Peralta” didn’t quite come together for me until the very end of the episode because too much of its focus is on humor. While leaning heavily on jokes isn’t necessarily a bad thing for a sitcom, “Brooklyn Nine-Nine” has trouble balancing its comedy and its storytelling, with the comedy too often coming out on top.

Take “Captain Peralta,” for instance, which deals with a very heavy topic for Jake (Andy Samberg): his father (Whitford), who left his family when Jake was seven and now suddenly decides he wants to have lunch with his son. Like Boyle (Joe Lo Truglio), the audience should be highly suspicious, especially since Jake isn’t. Jake has shown this kind of optimistic thinking before, particularly in “The Pontiac Bandit Returns,” and it always leads to him getting hurt.

The episode itself seems determined to match Jake’s optimism, throwing in joke after joke, even when it becomes clear that Jake’s father is using him to get out of an illegal drug charge. Some comedy in this instance is welcome, given that we don’t want our sitcoms too dark, but keeping the episode as upbeat as possible means the emotional toll of Jake’s abandonment issues then falls on the audience. We’re worried that something’s wrong, and the episode does little to dissuade us of this notion. Indeed, it uses Boyle’s need to think badly of Jake’s dad to constantly remind us that there’s a problem here.

To its credit, “Captain Peralta” doesn’t take the easy way out of this plotline. It would be entirely justifiable if we found out Jake’s dad was lying about not importing drugs, so we could be done and hate him just as much as Boyle does. But by clearing Jake’s father’s name, the episode leads itself to a morally gray territory that isn’t often explored on sitcoms. Jake’s dad might not be a criminal, but that doesn’t make him a good guy.

In the last five minutes, the episode turns on its head when Jake’s dad texts Jake and says he can’t make it to his own celebration party. Just like that, Jake’s optimism breaks into pieces. This is the stab in the back that we’ve been waiting for the whole episode. Though Jake could very easily view being let down by his dad yet again as a tragedy, he doesn’t. Instead, he uses the experience, gathers his strength and in a really nice capper to the plotline, confronts his dad with the newfound knowledge that he wasn’t a good father. By telling his dad that until he’s ready to be a better father he shouldn’t call Jake anymore, Jake more than earns his slow-motion, triumphant walk off.

Turning now to the subplot of “Captain Peralta,” I wonder if the writers thought that even with an exhaustive amount of jokes in the main plot, it was still too emotionally heavy for a sitcom because this subplot doesn’t initially appear to have much substance beyond jokes. Having Terry (Terry Crews) and Amy (Melissa Fumero) vie against Gina (Chelsea Peretti) and Rosa (Stephanie Beatriz) in a brainteaser contest for Beyonce tickets is a silly idea which lends itself to a lot of filler.

For much of “Captain Peralta,” I was left wondering why I was watching the episode and why these specific stories mattered. Finally, at the last second, the main plot of the episode revealed its true heart and intentions, and similarly, the subplot redeems itself at the last moment. Gina and Rosa don’t figure out the answer to the brainteaser Holt (Andre Braugher) has given them, but they do figure out why he did: Holt’s former captain originally gave him the brainteaser, and after 20 years, Holt still doesn’t have the answer, so he was hoping one of his detectives could solve the puzzle.

By answering why Holt gave them the brainteaser, Gina and Rosa also answer why this episode was constructed the way it was. While it seems odd to pair two plots with so much filler together, they end up tying together thematically. Over the course of these two seasons, we’ve learned that Jake wants his father to be proud of him, and that’s the same thing Holt wants from his captain. Neither one gets what they wanted, but they get satisfaction instead. Just as Jake tells his father not to call him anymore, Holt decides to tell his captain that he’s busy running a precinct, and though he can’t solve the brainteaser, his own captaincy proves he’s doing a good job.

“Captain Peralta” wastes a lot of time before it finally brings both plotlines in focus, and while those first 20 minutes may have been funny, they’re largely forgettable. Several episodes of this season have had a similar structure, making the audience sit through a joke-heavy two-thirds before bringing the emotional heat at the last minute. It’s a structure that doesn’t lend itself to long-term character arcs, and while it just might serve for some sitcoms, I thought “Brooklyn Nine-Nine” was better than that.