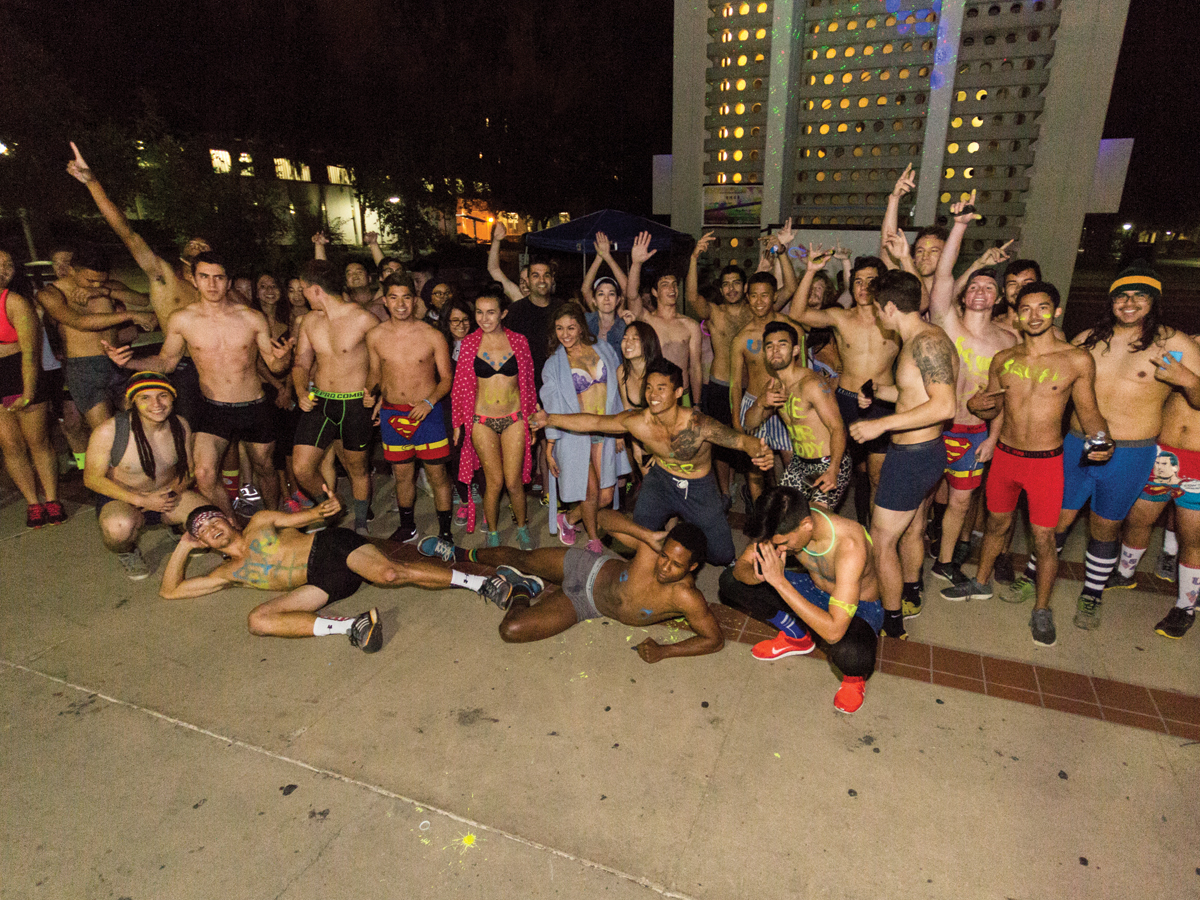 The upbeat tunes of a song by Pitbull could be heard from as far as the bookstore as I approached the Bell Tower promptly at 9 p.m. this past Thursday evening. In a near-freezing 50 degrees — at least for a SoCal native like myself — clusters of UCR’s students grouped together, desperate to share body warmth, as they trembled and shivered in half-naked bodies. Wait, what? Naked? Yup, that’s exactly what you read.

The Bell Tower stood as a brightly lit ornament behind dozens of Highlanders as they stripped down to their boxers and bras in preparation for none other than the Undie Run. Hosted by ASUCR, the Undie Run — though a great excuse to flaunt Highlander spirit— is a charitable event that donates half of the clothing to a soup kitchen at the First Congressional Church in downtown Riverside. The other half is dedicated to powering the R’Closet, a branch of the R’Pantry, a resource that offers free food to students. Soon to be available to UCR students, the R’Closet is meant to provide clothing to those who cannot afford to purchase new clothes. “R’Closet will also be a place for students to rent out interview outfits so that students do not feel obligated to purchase presentable clothing in order to get a job,” fourth-year English major Colette King added.

CHASS senators King and Jackie Jacoby, fourth-year theater major, coordinated this year’s Undie Run in hopes of providing clothing to their community, but also wished that it would be “a step toward shifting the mindset of (their) campus culture on body image.”

Before the run commenced, participants were asked to paint and highlight features of their bodies that they most appreciated with neon paint. Third-year sociology major Andy Tang revealed that this is a movement designed to teach students the importance of “accepting one’s self” and “ignoring harsh criticisms.” Runners are not forced to shed their clothing since it may be uncomfortable for many, but this activity is meant to empower people and aid them in embracing their physical traits. With an estimated number of 300 participants, King and Jacoby’s goal to enhance self-confidence and “support the Riverside community” was definitely achieved.

After a brief introduction of the event and its guidelines, the crowd quickly became impatient and restless, as they were eager to begin the run and warm themselves up from the rather frosty weather. Led by undeclared first-year Caspar Gaviria, the large crowd finally took off on the paved path toward the Humanities Building. As soon as I felt warmed up with the group of undie runners, I began to understand that this was more than just a good cause — it was a great experience too. Participants ran by in a wide array of outfits, ranging from simple undergarments and sportswear to flamboyant tutus and brilliantly printed bras and boxers.

“Honestly, the cold doesn’t even bother me. I feel warm inside just from the kinetic atmosphere and excitement that radiates off everyone else,” first-year theater major Esther Posadas beamed at the start of the run. The togetherness and enthusiastic ambience Posadas pointed out became emphatically apparent as we all ran toward Orbach Library with many laughing hysterically at the situation’s ridiculousness, while making sure to Snapchat and record the majority of the experience. No matter how absurd the event felt, students from a variety of different clubs and backgrounds were able to gain a sense of belonging.

Many students, like third-year mechanical engineering major Kevin Tang, chose to return to the Undie Run due to the “amazing vibe and high energy.” Like Tang, I undoubtedly felt the contagious presence of others’ high spirits as we made the homestretch toward the lit-up Bell Tower. Even after the completion of our run, dozens of Highlanders chose to remain out in the seemingly forgotten 50 degrees and congratulate each other on an unforgettable accomplishment.

With tubs upon bins upon carts of clothing piled high and half-clad bodies covered in neon paint, the Undie Run definitely achieved what it had set out to do. It brought together the spirit of Highlanders to empower their confidence, while donating to a great cause.