Highlander
Home Radar Building Culture: Back to the Grind brings creative space and community together 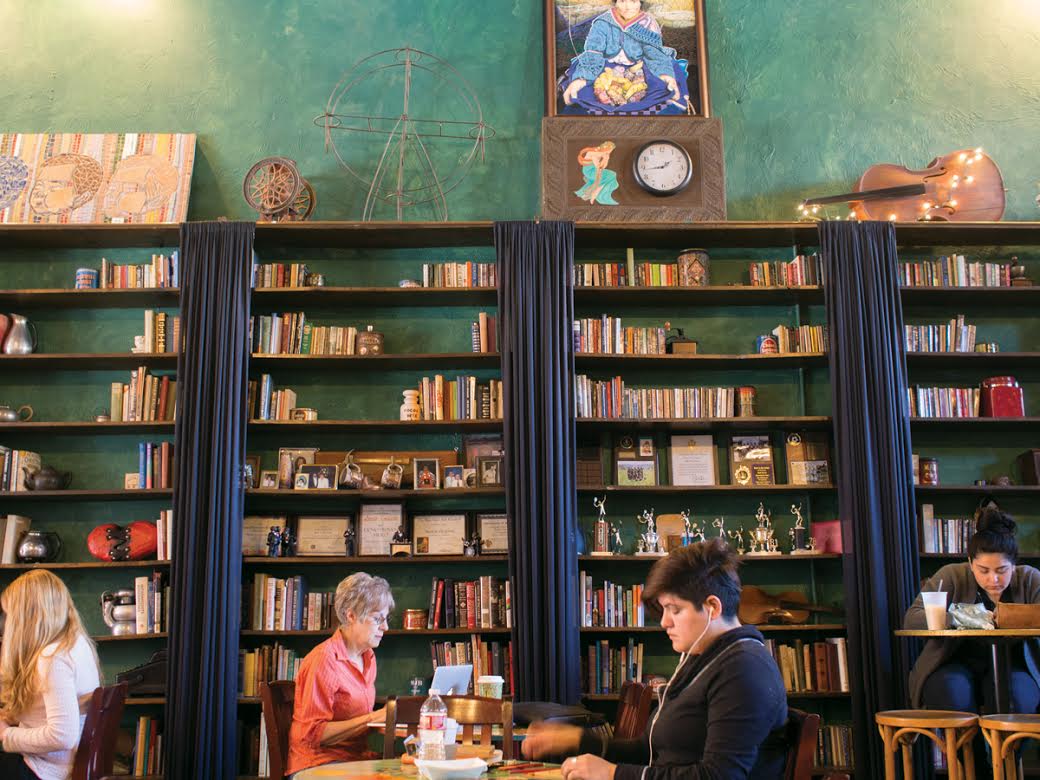 On the strip of University Avenue that runs through downtown, cars whiz past. Filled with the district’s rushed workers, the majority of these drivers are scurrying off to one of many offices located in the area. Look closely enough, however, and amidst the hustle and bustle you’ll see two large glass windows and double doors covered by a dark red canopy. On top of the doors, not visible from the street, are white letters on the glass that read “Back to the Grind.” Established in 1996 by owner Darren Conkerite, the coffee shop serves as much more than that to the local Riverside community.

“Our mission statement from opening was (for) Back to the Grind (to be a place) for all to come together keeping all labels outside, so we knew we wanted a very open space, where you’re not judged, not for any kind of religious background, sexual preference, color of your skin, any kind of financial disposition, none of that matters,” he said. “You come in, there’s beverages, there’s conversation, there’s a band playing where you can be entertained, and we just wanted to eliminate any of that outside craziness.”

Walk through the double doors, and the shop greets you like an old friend. Everyone from students to senior citizens to everyone in between can be found lounging on one of many couches — not brand-new ones, but the kind that have been there for years and are incomparably comfy. Aside from the couches, tables and chairs lining the inside, the brick walls are adorned with works of local artists — look up near the cash register, and you’ll see a black and white baby urinating into a pitcher. Turn around, a giant bookshelf covering nearly the entire wall is adorned with hundreds of books and board games open for anyone to use.

As easygoing as a friend you’ve known for years, Conkerite laid out Back to the Grind’s history. He and a friend at the time, who came from very different working spaces, both knew they wanted to start a coffee shop. “We both came from different backgrounds, he was a corporate banker and I was at that time a cheesemaker,” Conkerite remembered. “We always said that if we weren’t at our present jobs we would want to do a coffee house because we like the networking with people and the music and the art and all that aspect of it.” They knew they wanted open the shop before they were 30, so they pooled their money and found an empty shop (formerly Lane’s Country Store). It was the perfect opportunity.

“The grind to me is a space that says ‘community.’ And that is important to a small town like Riverside.’” Mario Sandoval, host of Monday night open mics, said. Nearly every Monday night since 2000, Sandoval has hosted an open mic in the basement of the building, designed to allow anyone and everyone to come and be what they want to be. “It really doesn’t matter what ‘label’ you choose to call yourself, but I’m sure that on any given day, you’ll find someone who you can connect with here.”

“And I think that we have such a diverse crowd, you know we have everyone from young, high school kids to grandparents and every walk of life that comes sits and gets along,” Conkerite added.

A cement staircase leads down into a dank, dimly lit room. For a moment, I can’t identify the smell — it reminds me of a church. After a moment I realize it’s incense. And as the performance goes on, I realize the space isn’t entirely unlike a church — a place where people of different stripes gather, with the shared belief here being that everyone should have a voice, and that they deserve your full attention.

“This is a place where you, the artist comes and gets to show yourself to the world,” Sandoval continued. “We make it comfortable for first timers to come in and perform. It’s like playing in front of a bunch of your friends.” Everyone, from students to people from around the world have come to perform in this space. “So as a host, I get the opportunity to introduce all these new acts and performers, and I get to listen firsthand … that’s entertainment,” Sandoval continued.

Underneath the multicolored lights and low ceiling on a stage about a foot off the ground, comedians, songwriters and poets all bare their souls. A screaming, stomping, electrifying poet. A singer-songwriter wearing only a guitar over their chest, revolution on the mind with songs to inspire the audience. A comedian with a story to tell about his younger days, a room to invigorate and laughs to be had. Hundreds, if not thousands before them, have been able to express their thoughts in this safe space.

“I think Back to the Grind is one of the few places in Riverside that really feels all-inclusive to people from all walks of life: age, gender, you name it,” fourth-year media and cultural studies major Sarinah Simons said. “I’ve been to their open mic night before and it was really fun. The venue really caters to local musicians and that’s great to see. We definitely need more of that. More people invested in the community and the arts.”

Simons isn’t the only student who feels this way about the venue’s many accomodations.

“As a student, I like how the place is a great piece of ambience away from the university. It’s peaceful yet very convivial,” second-year pre-business major Alexa Paredes added.

Late last year, however, the downtown entity came under threat. Conkerite explained that in about August 2014, a plaintiff and attorney came to downtown and sued about 75 businesses who were not compliant with the American Disabilities Act. Even for an institution as popular as Back to the Grind, renovations still cost a pretty penny. Thankfully, they had a community to back them up.

“We thought as a group we would do a campaign and get the community involved,” Conkerite explained. “You know we’ve been here 19 years and we’ve hosted thousands of bands and thousands of artists, and we thought, you know, if everyone just came to the table and said, ‘you know, those guys gave me a free show and then they let me hang my work on the wall … we would come up with the adequate funds to do the renovation, and I think we met that.”

“When the court date came … they never showed up. Now we’re under no threat, as far as that goes. It was a blessing in disguise,” Conkerite smiled. The fact that he had to work long and hard to get to this position of community support isn’t lost on Conkerite, either.

“This is my kid, this is my baby, this is the offspring that I would never have, so it means the world to me,” Conkerite related, explaining that he does all the work he expects his employees to do. “So it’s just like what we’ve built here, I want to always remain here, and I want the culture that we’ve managed to sustain all these years, I want it to continue to grow.”

Success didn’t necessarily come overnight for Conkerite, but the shop has only continued to grow along with the surrounding downtown area. “It took this amount of time to get going, but I think it’s going now, it’s on the right path,” Conkerite said.

“I’m just going to keep lovin’ my baby and continue with business,” he added.