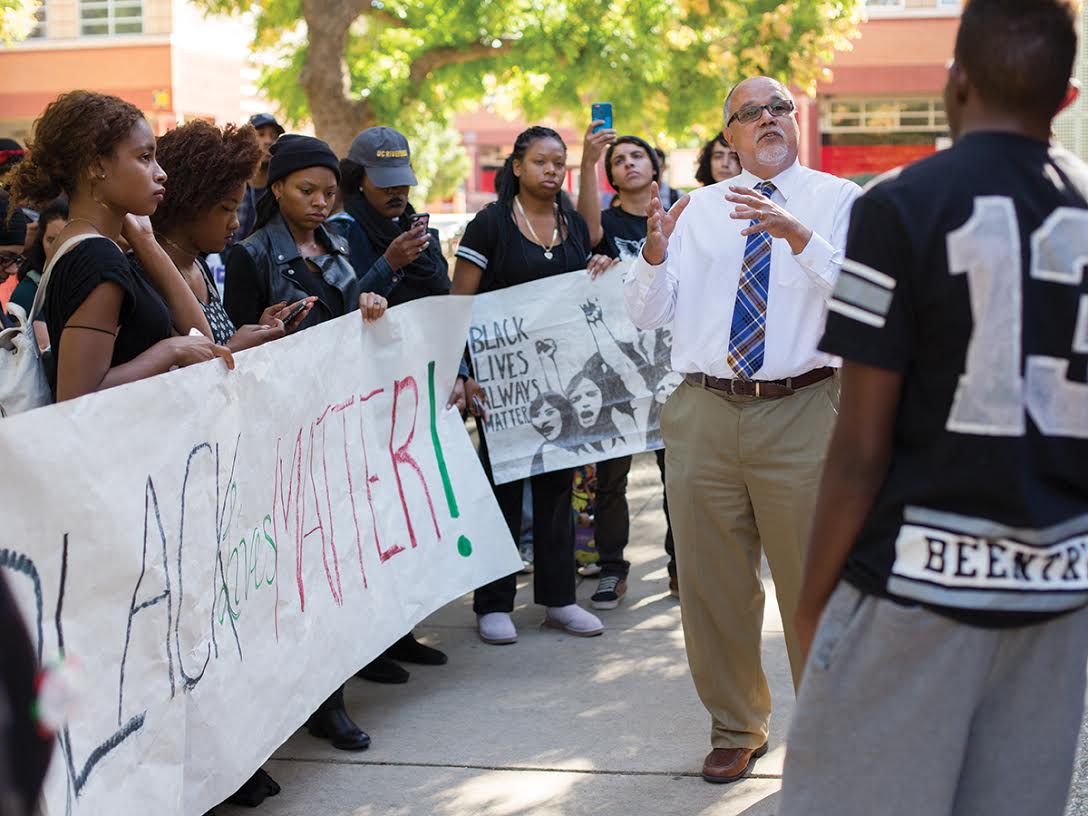 Approximately 60 students gathered at the Bell Tower on Wednesday, Nov.18 in a march expressing solidarity with the students from the University of Missouri and to improve the lack of representation of African-American students, faculty and staff members at UCR.

The march, which ended at Hinderaker Hall, attracted the attention of the Vice Chancellor of Student Affairs Jim Sandoval, Executive Vice Provost Paul D’Anieri and UCPD Police chief Mike Lane who came out to speak with the protestors.

Alexander Wilson, the main organizer for the march, began by addressing the crowd from the nooner stage to discuss the issues African-Americans face on campus, before the weekly performance began. “I still am the victim of constant micro-aggressions,” Wilson told the crowd before marching off to Hinderaker with the crowd.

In regards to increasing African-American enrollment, Sandoval stated that there were programs such as Saturday Academy which encourages students from underprivileged backgrounds to seek a university education. “I would be lying to you if I said it wasn’t a challenge, it’s a challenge that’s why we’re being proactive and encourage student involvement,” Sandoval explained.

Wilson stated that these demonstrations would continue every Wednesday until these concerns are addressed and rectified by the campus administration. In response Sandoval expressed that the administration would work out a time to meet with students to discuss ways to improve the climate on campus.

Other goals mentioned involved the creation of a taskforce to meet with the faculty hiring committees to approve new hires. “We (administration) can do more, we need to do more, we should do more and like you said we need to listen more (to student concerns),” D’Anieri stated in regards to improving representation amongst campus faculty.

Lane spoke about police training and the importance of having the campus community address their concerns about UCPD in order to build a stronger bond. “I think you all need to let the community know this is a concern,” Lane voiced.

Mohammed “Momo” Hussein, the vice president of external affairs for ASUCR, however, felt that it was not enough “Instead of teaching black students how not to get fucked up by the cops, we should teach police how to deal with African-American students.”

Lane, then explained the importance of both officers and students making the effort to communicate with each other. “I think it’s all about awareness, I think it’s best that we discuss these issues face to face,” Lane elucidated, before promising to set a time to meet with students as well.

Alexander Wilson, is a contributing writer for the Highlander