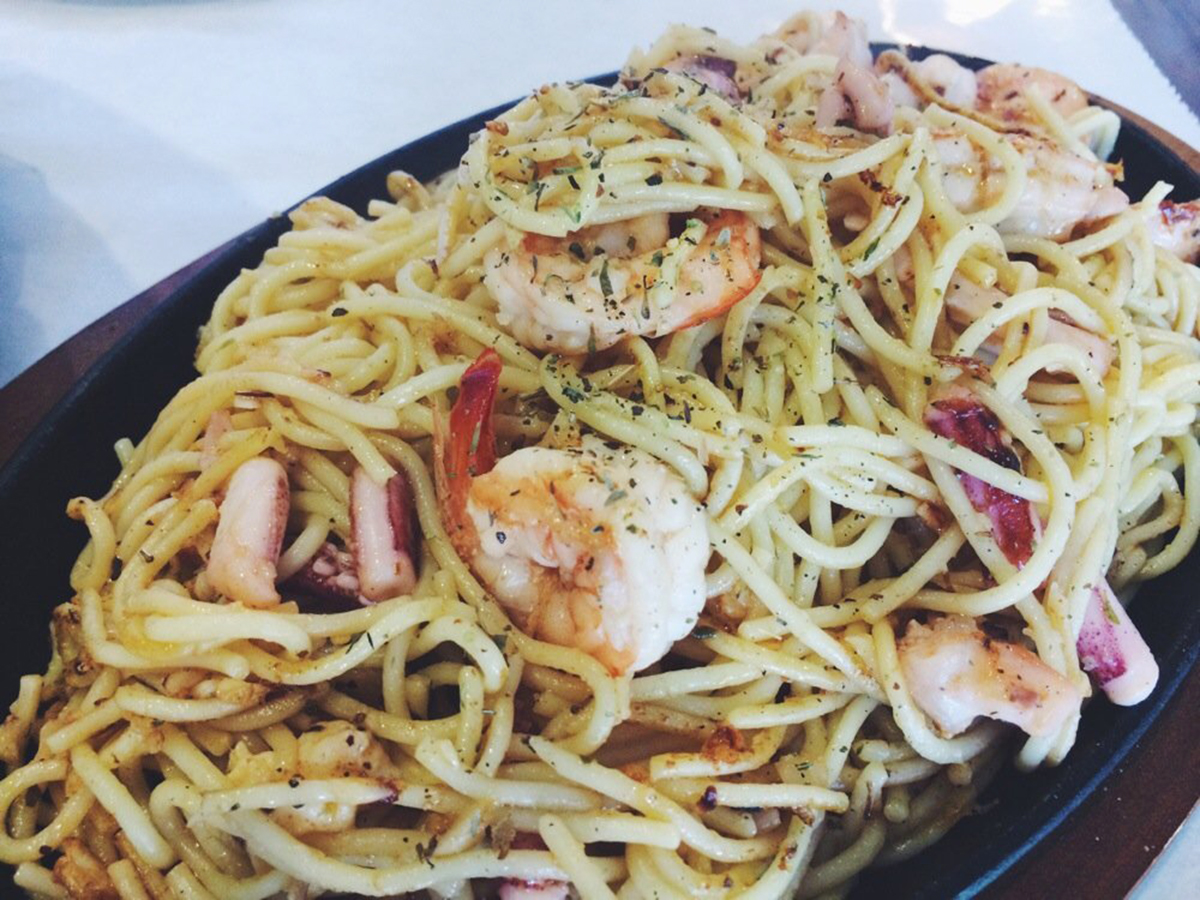 Right next to Lollicup, Submarine Crab is the newest addition to the busy student-filled area of University Village. Submarine Crab sounds an awful lot like Boiling Crab, and looking at the menu, the similarities were uncanny. However, it’s not a bad thing — who doesn’t want good seafood closer to home?

Walking through the door with my friend Audrey, we were greeted cheerfully by a waitress who told us to sit anywhere we’d like. Since we came right after lunch and just before dinner, the place was empty, and the only sound that echoed throughout the room was of a basketball game playing on two TV screens. All the tables were covered with a paper tablecloth and contained a giant roll of paper towels, which was extremely convenient. The design of the restaurant definitely screamed submarine, with gray, yellow and ocean blue paint covering the walls, portholes lining the walls and brass ladders at the register, giving the customers an illusion of dining under the sea. Audrey even said, “I’m getting a very Spongebob aesthetic right now,” as she sat down.

Our waitress handed us a menu and our eyes darted immediately to the combos right at the center. The combos were buckets filled with classic seafood such as clams, shrimp, crawfish, crab legs, lobster tails, and could feed two to four people, depending on what combo you order. And as much as we wanted to order one, the prices are what you expect when it comes to seafood, about 30 to 60 dollars. But don’t worry! There are other seafood alternatives and even non-seafood items at a much more college-friendly price.

After a few minutes of deciding, I ordered the seafood pasta which consisted of angel hair pasta, mildly spicy sausage, peeled shrimp and two mussels, all topped with cheese. Audrey decided on a dish called the Sailor’s Choice in which you choose two fried items ranging from chicken wings to fried squid, and it includes fries and a drink. While waiting for our meals, we were served a free basket full of large shrimp chips that satisfied our hunger until our main course arrived. Our waitress, along with another waiter, always made sure we had enough water and even started joking around with us.

When we heard our waitress’s footsteps approaching and saw her carrying two plates of steaming food, we excitedly cleared our table to make room. She set down our meals and I was delightfully surprised at the portion and presentation of my pasta. It was served in a curved, ceramic plate with an abundance of pasta that created a hill-like structure. When I was finished eating it didn’t even look like I had touched my food.

Before taking my first bite, I could tell by the look of the cheese and the color of the pasta that it was going to be packed with flavor — and I was correct. I’m not much of a foodie so I can’t point out the exact spices and flavors, but it was blended masterfully. I took a bite of the pink shrimp which complimented the pasta. The mussels tasted very fresh, like they had just been plucked from the ocean. The sliced sausages gave the dish an extra flavor that I enjoyed. It added another element of spice and a punch that made my meal come together.

Audrey’s Sailor’s Choice consisted of chicken tenders, fried rice as a substitute for fries (they ran out of fries but Audrey was more excited about the rice) and fried shrimp. My other friend Sam joined us about 10 minutes after we got our food. She ordered a Sailor’s Choice as well and she picked fried squid and fried shrimp along with a side salad. All portions were equal to each other and after their first bite, with a mouth full of food, they flashed a thumbs up.

Overall, the food was amazing and the staff were pleasant, but a little spark was missing from the atmosphere. Maybe playing a little theme music or adding more decor like fishing nets could’ve made the whole experience come together a bit more. However, these missing details wouldn’t stop me from returning. Submarine Crab is a great new establishment in University Village if you’re in the mood for a little seafood. I’ll be sure to eat there again soon, ready for that large seafood bucket combo.