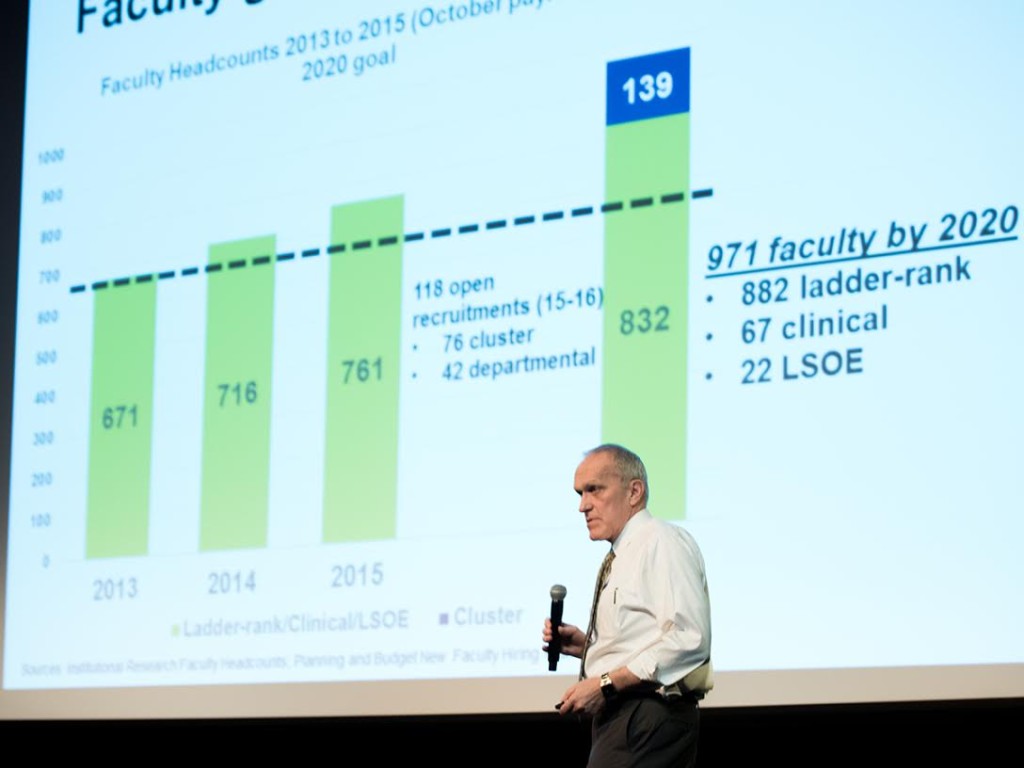 Chancellor Kim Wilcox held a town hall meeting on Tuesday, Feb. 9 to discuss the progress of UCR’s Strategic Action Plan: UCR 2020. Approximately 60 people attended the talk at the University Theatre in which the chancellor discussed slowing down the hiring process for the upcoming year, while aiming to increase graduate student and out-of-state student enrollment.

For this academic year, there are currently 118 open recruitments, 76 of which are involved in the cluster hiring process — the process of hiring faculty into multiple departments or schools around interdisciplinary research topics. In addition, Wilcox has changed the hiring process which will have the deans of each department select their faculty prospects without the approval of the university provost. “You had to go get the provost to approve the faculty hiring plan,” Wilcox explained. “From now on those decisions will be dean’s alone, or however the colleges choose to organize that.”

Due to the large number of hires made in the past couple of years, Wilcox stated that he will slow down the hiring process in order to allow time to look at future prospects more critically. “We may well have moved too fast. … So take-home message: We have made great progress, I think in faculty growth … but at this point in history looking forward we have the time to talk about what we would like to do from here on,” Wilcox elaborated, adding that deans would be able to look more critically for additional hires.

Another major focus Wilcox presented was to increase graduate student master’s programs and out-of-state student enrollment. As students in master’s programs pay tuition out-of-pocket and tuition from out-of-state students are more than triple the tuition of a state resident, Wilcox believes enrolling these students can improve campus resources. “Those non resident students provide the resources on behalf of the California students,” Wilcox said.

In addition, Wilcox stated that he believes adding out-of state students can diversify an undergraduate’s world view. “The student body is 3 percent non resident … At 97 percent undergraduate resident students, and most of those students are from Southern California … essentially those students are coming to a large California high school … They’re going to school with people who live in the very same state legislative system. The very same political system. The very same environmental concerns … The very same view of the world that everybody else did and I don’t think that’s doing the students a very good service,” Wilcox elucidated.

After his presentation Wilcox held a Q-and-A session. An audience member asked, “We talked a lot about student diversity but I’m thinking about building and attending to issues of diversity at the faculty staff levels … How do you see that as integral to the mission of growth?”

“When I look at our university and I look at the data, I see one of the most diverse undergraduate student bodies in the country … but not a very diverse faculty,” Wilcox stated. “We have an opportunity (with the expansion plan), some might argue a responsibility, to attack that pretty well head on.”

Correction 2/23/16: The audience member was incorrectly stated as Tiffany Moxham.