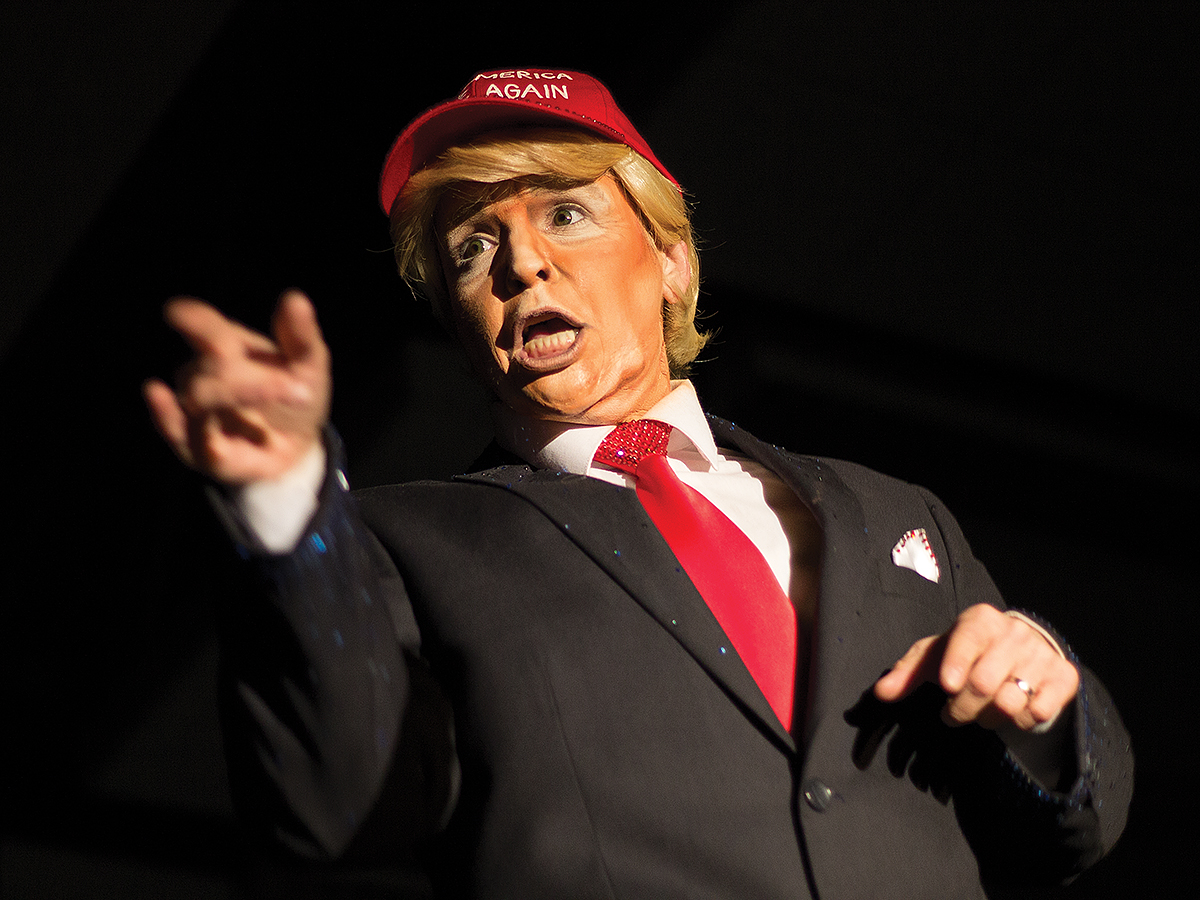 The “Dragalicious Drag Ball” is one of the few times of the year when students, whether they wear extravagant drag or come as they are, are invited to feel fabulous. It started in 2004 when LGBT Resource Center’s (LGBTRC) Queer Alliance wanted to spotlight UCR’s students using lavish dance routines, fashion and music. According to the LGBTRC, the event “gets better every year.”

The 13th annual Drag Ball, which was themed “Drag Me To Hell,” occurred on Thursday, March 31 in HUB 302. Doors opened at 7 p.m. but the show didn’t start until 8 p.m. I didn’t understand why the doors opened so early; however, as soon as I stepped into the ballroom, I was shocked to see that there were already around 200-250 people eagerly sitting in the ballroom.

Audience members jovially conversed with others around them about their makeup and outfits. There were a handful of people who dressed in drag, which often consisted of wigs, heavy makeup and facial glitter. However, even most of the audience, who were not dressed in drag, stood out above the average passerby with brightly colored hair and pronounced accessories, such as bold-rimmed glasses, dark eye makeup and chokers.

When the lights finally dimmed, the excited audience roared with enthusiasm, but the suspense remained when an introduction video played. After the video, an announcer from the intercom finally introduced the Mistress of the Evening, Miss Mayhem Miller, who emerged from the staircase looking like a neon goddess. Her dress had purple and green geometric patterns, and she was wearing a golden headpiece and white-colored contact lenses. She confidently strolled down the runway wearing a face straight from a photoshoot as she lip-synced the words to “My Life is a Drama” by Dalkloid. People ran up to the stage with money, even though the actual ball had not even started yet.

When the introduction walk was over, Miss Mayhem spoke in a voice that was surprisingly friendly in comparison to her goddess persona on the runway. Mayhem’s on-the-spot humor and dirty jokes elicited thunderous laughter and made the show a truly interactive experience from the start. After scouring the crowd for anyone who had any alcohol, she said she would “shut the fuck up and get on with the show,” and announced the first out of 16 performances with a drag king named Phantom.

Phantom approached the stage as Hellraiser, with white face paint and needles on his head. When the music transitioned into a haunting screamo, Phantom began to pull out gutty chains from a box. The dance ended with the famous line from Hellraiser, “Welcome to the worst nightmare of all — reality,” as Phantom threw the gutty chains in the air. After the performance, Mayhem said that the show was some “demonic shit” and that she was going to “go back to church this Sunday.

In a performance titled “Trump Nightmare,” drag king Landon Cider dressed up as the 2016 GOP candidate with a fake tan, bright under-eye makeup and a corn hair-like wig. After Cider re-enacted Trump’s statement “We never get bored,” the monologues suddenly paused and “All I Do Is Win” by DJ Khaled boomed through the intercoms. When Ludacris’ rap came on, Cider put on a red Donald Trump cap and began rapping, which made people instantly flock to the stage with money. After Cider’s performance, Mayhem collected a $20 bill and stuffed it into her bra. She wittily remarked, “Donald Trump doesn’t collect money,” referring to Trump’s self-funding campaign principle.

Cider also gave a moving performance to “Enjoy the Silence” by Depeche Mode, except it was not lip-synced. Instead, Cider signed the words using American Sign Language to complement the song. Unlike the rest of the performances, which consisted of elaborate struts down the stage and dramatic jumps and leg lifts, Cider barely strayed from the same spot. The only time he opened his mouth was at the end when blood rushed out of it. This symbolized the pain that words can inflict, relating to the lines from the song that say, “Words are very unnecessary, they can only do harm.”

Karina, a drag queen, gave the most exhilarating performance of the night with “Wet Dollars” by Tink. Karina looked like a model straight from the ‘90s with her short bob wig and knee-high socks, and she had the graceful movements of a dancer. Even though her entire performance was captivating, she ended it on a high note when she jumped into the air and somehow landed her entire body flat on the ground without killing herself.

After the drag show, audience members were invited to strut down the runway in their own drag outfits for the well-anticipated walk-off. While volunteers were being collected, Mayhem expertly occupied the crowd by taking “roll-call,” or asking how many people were lesbian, gay, straight, transgender or bisexual. Most of the audience members were straight, and Mayhem directed the spotlights to go back and forth on audience members who mentioned other sexual orientations, such as pansexuality and asexuality.

She also pulled out a straight male from the audience named Sam and asked him if he was single, to which he said “no.” Upon hearing this, Mayhem went off the stage and asked Sam how he felt when he looked at her, to which he replied “neutral.” Mayhem then invited him to be the first person to walk on the runway, which he actually strutted with a straight face like a model. The rest of the walk-off was a showcase of audience members wearing very distinctive, interesting outfits, including a sequined dress that was so shiny that it made the ceiling a sea full of pink and someone with a face full of glitter and a blanket covering their head.

After the volunteer walk-off, Mayhem brought back four of the drag queens from the drag show to have the audience vote on which one she would invite to be in her widely acclaimed drag impersonation troupe, the Dreamgirls Revue.

The four drag queens, Karina, Sasha Connie, Merlin and Diamond, all danced to “Disturbia” by Rihanna. It was clear to the audience that the only queen who had the stamina, skill and seductiveness to engross the audience throughout the entire song was Karina, who had changed into a flowy white dress and long-haired wig. Once again, she breathtakingly ended her performance by falling to the ground; this time, however, she landed so gracefully that she looked like a ghost disappearing into the floor with her effortless movement and soft white dress.

Without surprise, the audience screamed for her when it was time to choose, and she was crowned at her knees like a true queen.
The Drag Ball is one of the most exciting annual events at UCR and was personally my favorite event that I have attended so far as a freshman. It’s a special night when people can be absolutely anything they want to be and be embraced for it, and if anything, the weirder, the better.