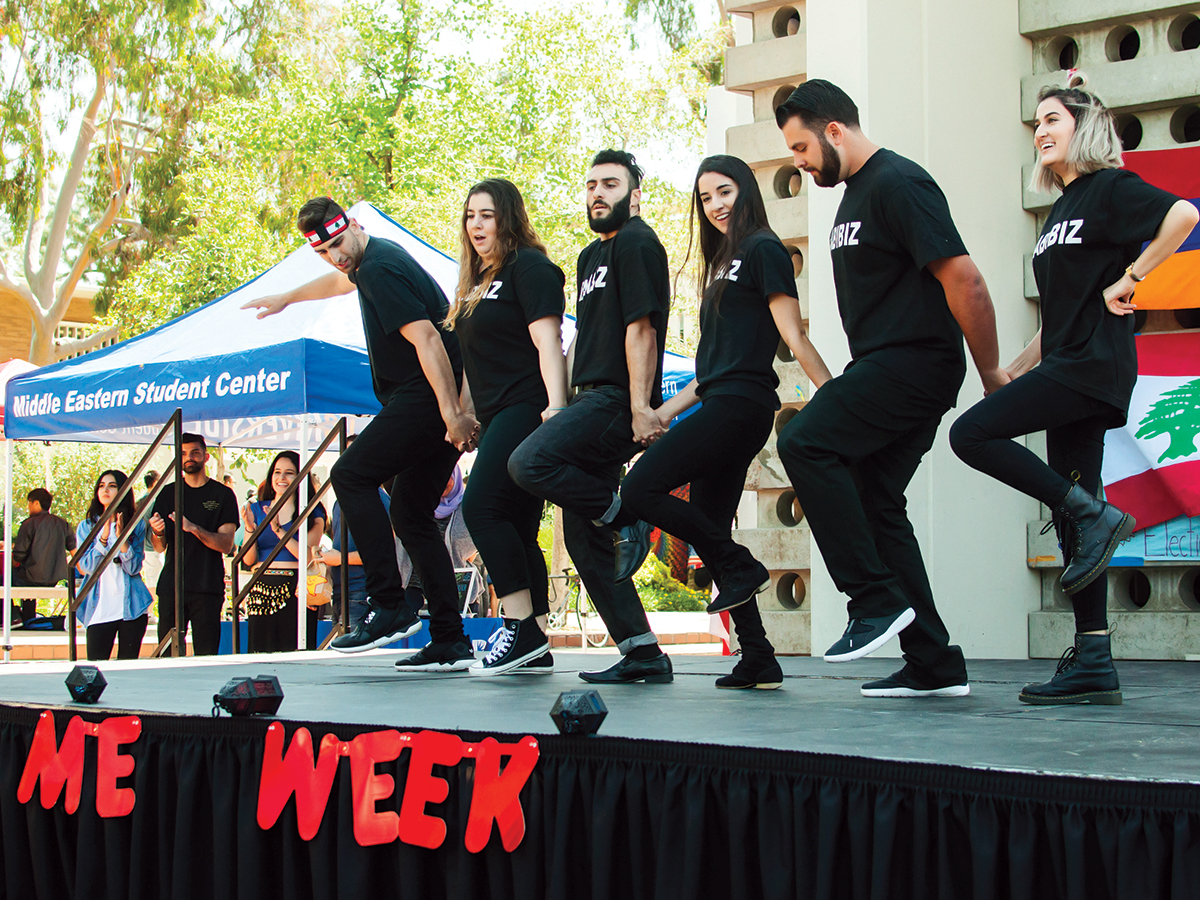 Ever since the inception of the Middle Eastern Student Center (MESC) in 2013, the organization has hosted a plethora of events ranging from panel discussions with distinguished speakers like Dr. Reza Aslan, associate professor of creative writing at UCR, to open mic poetry nights and other various social events.

This year the MESC once again hosted Middle Eastern Week, which premiered with a student-led discussion panel entitled, “True Life: I am a Middle Eastern Minority.” There was a successful turnout at the event, and halfway through there was only standing room left in the back. The discussion was facilitated by UCR alumna Tina Aoun, who happens to also be one of the founders of the MESC. Fourth-year film production major A’Isha Saleh, who interns for the MESC, organized and coordinated the event. She shared that, “The purpose of this panel was to let people know that these minorities exist,” and she was undoubtedly correct that many Americans, and many UCR students, are ignorant to the many diverse religious and cultural groups thriving in the Middle East.

A wide range of religions and backgrounds were represented at the panel. One speaker, Monique Mansour, who identifies as an Iraqi Chaldean and is a graduate student in the creative writing program, shared that in her culture they speak a form of Neo-Aramaic that no longer has a written form, only a spoken dialect. This language that has its roots in Mesopotamia is considered endangered today.

Mariam Hanna, an Egyptian Coptic, discussed how she views marriage as a joining of families, and for this reason might be inclined to marry someone from her own religious background. Olya Masek, a Persian Bahai woman and fourth-year theater major, also chimed in during the subject of marriage, and explained that in her culture, consent for marriage is customary for the sake of family unity. Each of the panelists agreed that they came from a very family-oriented culture.

Mary Daou, a Lebanese Maronite who double majors in political science and studio art, commented after reflecting on the event, “I truly enjoyed partaking in this event, especially because I often encounter people who are unaware that the country of my minority even exists; so, this has been a great way to change that — even on such a small level.”

The goal of the discussion was to give people from diverse backgrounds a platform to share their cultural traditions and experiences with a wider audience, and to highlight how these experiences have shaped their worldview. UCR student Naader Karimi summarized one of the themes of the afternoon well: “Being a minority in general, not just Middle-Eastern, gives you a different perspective on the world.” Karimi, who identifies as a Shiite Muslim, went on to share some of his memories of attending an Islamic school until the 9/11 terrorist attacks and having to switch to a public school due to his parents’ concern for his safety. Near the end of the talk, he summarized his position with the declaration that “all religions are peaceful when practiced properly.”

With the Wednesday breeze and sunlight shining brightly on Riverside, the nooner event for the MESC rolled on. Vendors lined the walkway to the event and there, students could buy snacks and various cultural dishes from multiple clubs on campus. Among them included succulent chicken kabobs grilled to perfection, tostilocos and torta dishes. The nooner began with the performance of a hymn that powerfully reverberated throughout the area with a peaceful serenity that matched the weather.

Afterward, the Afghan Student Union (ASA) took center stage and performed a dance that heightened the atmosphere while showcasing the intricacies of their culture. With drums playing in the ambiance, the event continued on with illustrious belly dancing that caused the crowd to swoon and built people’s confidence and charisma for them to become involved in the following line dance.

Coordinators and dancers from the groups wanted people in the crowd to shake off their nerves and learn a simple piece of a Middle Eastern dance. This was an effective way to engage with the audience and after a convincing testimony, 20 university students joined in on a culturally dynamic dance. The unity was beautiful to see and there were times where they danced in harmony and looked graceful. Everyone dancing and watching had smiles on their faces as they admired the welding together of different cultural backgrounds.

Flags were passed around among observing crowd members to get them more involved in the spirit of the activities and once the line dancing subsided, the event came to a wonderful close. There was a strong sensation of cultural awareness and overwhelming good vibes resonating from the area.

UCR’s students wandered about Olmsted Quad while awaiting entrance into the University Theater for the first-ever Night of Middle Eastern Culture on Wednesday evening. After a long interim due to technical difficulties, the night’s events were finally set to start as all of the lights dimmed completely, allowing candles that illuminated the front of the stage to be seen. Two students from the MESC emceed the event by introducing each act that performed starting off with an immersion into a traditional folkloric line dance.

UCR’s Habibiz team gradually made their way onto the stage with five performers for the dance of duppata. Audience members immediately became engaged as the performers linked arms and enthusiastically stepped to the upbeat music, bringing forth their knees in an upward motion as they skipped backward.

Off to an energetic start, the tone of the night was brought toward a more serious note directly after as two students took the stage to proudly present their original poems. Shortly after, a performance of spoken word accompanied by a classical dance grasped the viewer’s attentions. One could visibly see the chills running through the auditorium as the diaspora of Middle Eastern culture was discussed alongside themes such as assimilation and appropriation.

The high spirits of the audience members were quickly revived as a belly dancing duo took the stage. Many students began to hoot and holler as they became mesmerized by the breathtaking movements of their rapidly shaking hips. They were followed by a pair of Bollywood dancers, who shook the stage and the audience’s hearts with each striking, synchronized motion that they performed.

A student from the ASA revealed an impressive talent in playing the tabla drums. Seated in the center of the stage, four drums of different forms were strategically placed around him as he rhythmically tapped his fingers and the heel of his palm on the drums at such a fast pace that it almost appeared as if it were improvised. The lengthy evening of acts was closed by a fashion show, which contained styles from an array of different Middle Eastern cultures. The beautifully elaborate gowns and fashions held origins from Pakistan, Palestine, Jordan and many other places.

This remarkable lineup of students from various Middle Eastern culture clubs and organizations on campus demonstrated an immense amount of cultural history within their talents. “I was surprised by how much I actually learned about different cultural backgrounds within the Middle East while being entertained,” revealed second-year media and cultural studies major Alyssa Che. The diversity among the Middle Eastern students was proudly represented throughout the culture show and left attendees in admiration of the range of traditions and talents practiced.

The HUB Plaza was filled with the scent of fresh bread and sesame seeds. Food and grocery market The Perfect Table was staffing a tent, making fresh Saj bread using za’atar, a blend of Middle Eastern herbs, and pairing each plate with white cheese and cucumber. The smell of the food blended with the cold night air and the sound of workers setting up the stage where “Mesc’n on the Mic” — an open mic night event that would cap off Middle Eastern Week on Thursday evening — would take place.

The performers at the event were as varied as they were talented. The first performer played a traditional Turkish baglama, a guitar-like stringed instrument. Though he stumbled a few times, the sounds that came forth were rich and layered, with a distinct twang. It almost sounded like there were multiple instruments being played at once, not one man with four strings. One of the emcees remarked, “It felt like we were on the rivers of Istanbul.”

There were also several performers who performed spoken word. The war in Syria and other problems in the Middle East were frequent topics. While much slam-poetry is free-verse, one of the poets used a blend of external and internal rhymes between each line. Another poet lamented how we have let 10,000 refugees into the country, but have dropped more than that many bombs on Syria up until the present day.

Aside from the food, the most standout performances of the evening were the stand-up comedians. They poked fun at life as a Muslim as well as life in general, connecting well with the entire audience. One poked fun at “levels of haram,” with backbiting being near the bottom but eating pork being at the very top. Another lamented the fact that Middle Eastern families always serve the same foods at dinner parties, and often take 45 minutes just to walk out the door.
Though the stage eventually opened up to impromptu performers, some people that had already performed came up to the stage again. However, this kept the energy of the event up for the duration and allowed more performers to test more material.